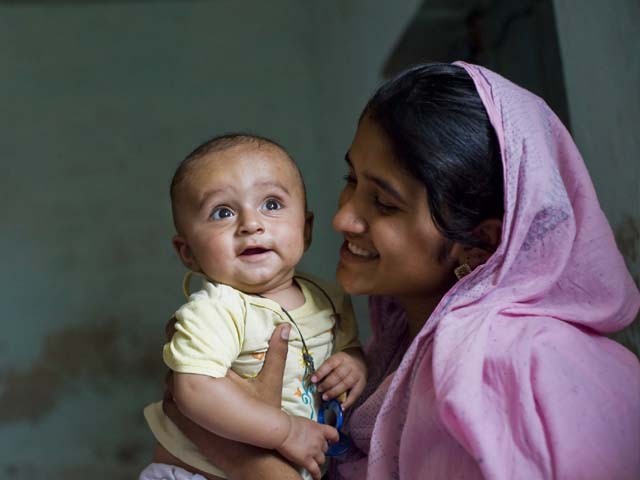 Ghazal and Shahbaz had seen the same dream for their son. They wanted him to be something that they couldn’t be. PHOTO: SAVE THE CHILDREN

The sky was bathed in the flaming yellow rays of the sun. It was a bright sunny morning in Lahore. Shahbaz’s rickshaw broke down again in the middle of the road. The traffic broke into wild outbursts of car horns, and angry people growled and grumbled at him for disrupting the traffic flow.

Shahbaz’s rickshaw was old now and rank with problems. If it stopped working one day, he wouldn’t even make as little money as he did now. The thought made him anxious. How would he provide for his wife and son if that happened? ‘I wish I could buy a new rickshaw,’ he thought ruefully.

For now, he took the rickshaw to the mechanic’s shop. That was all that he could afford with the money he had left at the month’s end.

It was nearly dusk when Shahbaz came home. Ghazal instantly knew he was distressed. He was too transparent, anyone could read him.

“What would you do even if you knew?”

Ghazal’s dark eyes flashed angrily, but she said nothing and bustled away.

She was brimming with curiosity, but she didn’t have to wait too long to know what troubled her husband so much.

When Yousaf got home at night after playing cricket with his friends, Shahbaz told him that he was selling his rickshaw and, with no other source of income, he couldn’t pay his school fees. Hence, he had decided to pull Yousaf out of school.

“My son will not drop out of school!”

She seethed inwardly, but stifled her indignation.

Shahbaz was wrong. Ghazal knew what to do.

Shahbaz’s once raven black, wiry hair were now white without a speck of black, and his face was buried in lines that made him look years older than he actually was. His distressed circumstances had made him an old man, and also bitter and discontent.

When Yousaf was born, 15 years ago, Shahbaz promised himself that he would do everything to make his son an educated man, but that dream soured in his head. His son would now grow up to be just like him. Shades of guilt and despair darkened his eyes.

If only he could arrange enough money to buy a new rickshaw, things would change. His son would go to school at least.

Ghazal strolled in the boisterous bazaar, waiting for Ejaz.

Ghazal and Ejaz were neighbours before Ghazal was married. They fancied each other and, after a whirlwind romance, decided to get married. But when Ghazal’s parents found out what she was up to, they married her off to Shahbaz. With that, Ghazal’s short love story came to an end.

Shahbaz was a good man, but broody and withdrawn. Or maybe just indifferent towards life. If Ghazal had a choice, she would not have married him.

Ejaz was wealthier than Shahbaz and had a lot of contacts. Ghazal knew he’d find a way to help her. But only if he showed up.

The sky was coloured in the deepest hues of red and orange as the sun went down. Ghazal still hadn’t come home.

Shahbaz was beginning to get worried. He sent Yousaf to look around for his mother. She had only gone to buy fruits, but it was almost night time and she still hadn’t come home.

Shahbaz felt tired, and his head blazed with grim and unspeakable thoughts.

And finally Ghazal came home, smiling from ear to ear, and looking pleased with herself.

“Where were you, Ghazal?” Shahbaz bellowed.

Ghazal dropped the pretence of a smile, but there was still a puckish sparkle in her eyes.

“I was trying to help you. And I did. I found a way out. Our son doesn’t have to drop out of school.”

Shahbaz’s temper had worn thin. His face had turned a fiery red. Ghazal had never seen him this angry before.

Silence laced with misgivings swelled between them.

“I went to meet Ejaz. He was my neighbour. He said he’ll get you a job as a driver. You’ll earn more money than you used to and in time you can save up enough money and even buy a new rickshaw.”

“Don’t try to involve yourself in my matters again,” rasped Shahbaz incredulously.

Ghazal politely tried to reason with him, then yelled at him, but Shahbaz turned a deaf ear to all her desperate pleas. She wanted her son to be something big in life, to do great things, but her husband was too conceited to let her help.

Ghazal sat outside in the crisp night air, under the moonlit sky. She cried bitter tears of guilt and blame.

“Hear a mother’s heart, Shahbaz,” she whispered to herself.

She didn’t sleep that night. It wasn’t easy to let go of her dreams.

“Ghazal, I want to meet Ejaz,” Shahbaz said, giving a shrug of resignation.

Ghazal brightened up. Shahbaz had never seen her this happy and relieved before.

He finally agreed to take the job. He was a poor man and needed the money. There was no other way that he could support his family. He had asked his own friends to help, but no one did.

Eventually, he decided he was only doing this for his son.

The balmy spring air smelt sweet, but the sun was still prickly and hot.

Ejaz was a rough-looking, swarthy man. He had a moustache that turned up at the corners, and his smile made Shahbaz wince in disgust. Shahbaz instantly disliked him.

“Your wife told me that you sold your rickshaw and are now pulling your son out of school. Why would you do that to the little boy?”

Shahbaz bristled at that, but Ejaz blithely prattled on.

“I found work for you at Azhar sahib’s house. He’ll pay you good money. At least more than what you made before.”

Shahbaz felt anger bubbling inside him. He wanted to go back and never see Ejaz again. He hated him. He decided he didn’t need his help. He’ll find another job. He’ll work something out.

His mind was suddenly buzzing with hasty, reckless ideas. But he realised too soon that he had no other choice but to accept Ejaz’s offer. He was, after all, a poor man who needed money.

The words had slipped off his tongue.

Shahbaz found himself floundering in feelings of guilt, grief, and maybe even envy. He hated taking Ejaz’s help, but what he hated more was the fact that when he couldn’t do something, Ghazal did. She saved the day.

A look of haughty disdain crossed his face. But he reminded himself that he was only doing this for his son.

Ghazal’s face stared back at her from a tarnished mirror. She saw her dark eyes twinkling with glee.

Ghazal and Shahbaz had seen the same dream for their son. They wanted him to be something that they couldn’t be. When Shahbaz’s rickshaw was gone, that dream had become impossible. But now Shahbaz had agreed to accept help from Ejaz, and their dream had become possible again.

Ghazal thanked her lucky stars because now her son would go to school.

The mother’s heart was finally heard.