In the streets of Pakistan, shine tomorrow’s stars 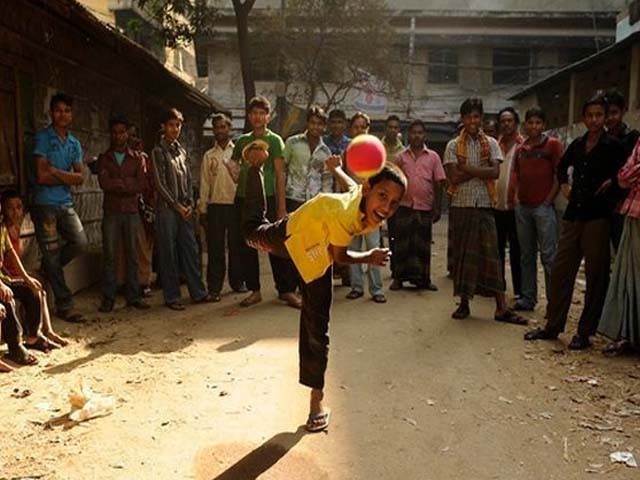 Perfect delivery: A child bowling on the streets. PHOTO: REUTERS

Every Pakistani boy who has even a tiny bit of interest in cricket must have played street cricket, at one point or another in his life. The game is coined as street cricket or galli cricket in Pakistan as it is mainly played on residential streets in cities.

This form of cricket is played with a tennis ball covered with electric tape. Taping the ball is sheer skill and every boy that has played the game has either mastered or tried mastering this art. The ball should remain round shaped after the taping otherwise it will move around in the air as well as after pitching.

There are some typical terminologies used in the galli cricket which one will never hear in professional cricket, neither by the players nor by commentators. Terms like ‘touch and go’ are common in street cricket. It means just play the ball while running and try to score a run whether the batsman hit the ball or not. There are many such terms that are not strange to the galli cricketers but would sound odd to the layman.

Cricket seems to have evolved quite a lot in the recent years. There have been many new inventions in shots and bowling styles. Sometimes people like me are amazed at how some of the avant-garde deliveries and shots played by the batsman are extremely common in street cricket. There are some examples of such new inventions in international cricket that have been used in galli cricket for decades!

In April 2008, a mystery spinner was introduced by the Sri Lankan team who took the entire world by surprise. That spinner was Ajantha Mendis, whose magic “carrom” ball left the cricketing world bamboozled. I was pretty bemused to see the whole world talking about this magical delivery with such awe.

Carrom ball is known as the “finger” ball in our streets and is used by every second person playing on the streets. Mendis ruled international batsmen with this very ordinary carom ball but he couldn’t fool Pakistanis with it! Our cricketers had been playing the same delivery successfully for ages – Mendis did not show Pakistan anything new.

Playing in narrow streets does not allow freeing the arms and hitting long mighty blows, because there is a risk of hitting the ball straight into some cranky aunty’s house, who would give you the third degree for ringing her bell and asking for it back. Due to this, a common shot played by the batsmen in our streets is one that is played by getting onto one knee and scooping it over his shoulder.

Sounds like a tough and awkward shot, does it not?

This shot has no real name in our slang street language, but the world today knows this shot by the name of “The Dilscoop”; yes, the shot that is supposedly invented by Tillakaratne Dilshan is a pretty common shot on our streets.

The innovative galli cricketers of Pakistan are extremely talented.

However, it is sad to notice that the upcoming talent in our cricket seems to have a bleak future. This is because of the lack of cricket played in the streets these days, due to the worsening law and order situation. The streets of Pakistan have produced legendary players like Mohammad Yousuf who was founded purely on raw talent when he made his debut.

Galli cricket is such a massive asset for our international cricket. One can draw parallels with street football played in Brazil, which has produced icons such as Ronaldinho and Neymar, and continues to enliven their youth. Street cricket has suffered a lot in the past two or three years and the constant reduction in the craze of playing in the streets can also be attributed to international teams boycotting playing games in Pakistan.

Playing on home turf hypes and engages the people, while an absence of it has started alienating supporters. This is why it is vital that street cricket be promoted at a higher level; it attracts the youth from every walk of life in the country.

Pakistan can produce more heroes in the world of cricket and this is a platform that can provide that pathway. We have the potential and it shines on the narrow streets of our cities and on the arid playgrounds of our muhallahs.

Someday street cricket talent will show on international pitches and make a name for Pakistan; the world will witness the raw talent Pakistan still produces!