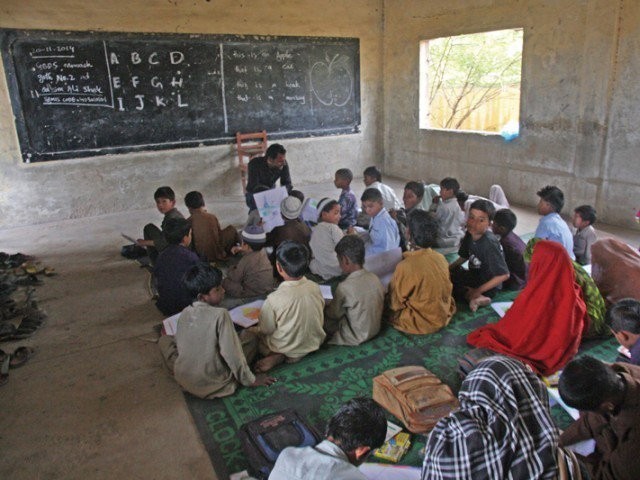 We need to be involved in practical participation in order to become agents of positive change. PHOTO: FILE/EXPRESS

While growing up in Karachi in the turbulent 90s, my neighbourhood used to be a perpetual warzone. Acting tough was the only way of surviving. Our future outlook used to be so bleak that career orientation was not even a fleeting thought in my mind.

As time passed by and I was faced with the prospect of monetary meltdown at the domestic front, I used to wonder why no one ever extended a helping hand to me and to numerous others who stood at the brink of an abyss that had already consumed hundreds, if not thousands, from our generation due to crime, politics and drugs.

I remember keeping a handgun in my school bag while I was in the ninth grade; it is not a glory story, but downright embarrassing as I think about it now. I just wanted to look tough and cool back then. One may call it my cowardice, or the corporal punishment meted out by my mother, that kept me at bay and reformed me before I could have harmed others like those around me were doing. However, there remains an itch or guilt for the unsavoury contributions that led to the downward spiral of my surroundings.

After a nightmarish transition from a rebel youth to a lowly paid blue collar worker, I crawled my way up into the world of white collared individuals, lamenting and criticising everyone except myself for the trials and tribulations I went through.

Later on when prosperity prevailed, there was a strong and insatiable urge to spread goodness and provide positive direction to our youth, enabling them to brace the turbulent times ahead. After an online search I came across The Citizens Foundation School’s (TCF) Career Counselling program, where young volunteers from all walks of life are supposed to impart career counselling to ninth and 10th graders from underprivileged backgrounds.

After shifting to Lahore due to a job relocation, I volunteered in the “Rahbar Program”. In Rahbar, each volunteer is required to work with eighth or ninth graders for six Saturdays. It turned out to be a wonderful experience to be able to mentor these students, who by and large have very little to look forward to past matriculation. After matriculation most of them drop out of school, mainly because boys have to earn so they can support their families, while most of the girls get married.

The wisdom behind signing up volunteers from diverse professional and educational backgrounds is to let these kids from the backwaters of our society attain awareness about the opportunities that lie ahead. Most of them are destined to miss out on these opportunities, not because they are anywhere less in pedigree, but due to belonging from the lower strata of society they are condemned by circumstance.

All the volunteers went in the program to impress the kids of their achievements, but came out of it enthused by what they had witnessed. The talent and ambition we observed was so immense and had such a powerful impact on me in particular, that even today I remain part of this program. What these underprivileged school kids need is a little bit of belief and confidence in themselves. They need to be assured that despite facing numerous hardships and constraints; they do have a chance to be a useful part of our society.

I listened to inspiring stories of eighth and ninth graders, who despite facing their own hurdles, attend school. They study even though there is prevalent illiteracy in most of the families. They study in post-apocalyptic slums and sub-rural surroundings, where clean water is a rare commodity and the sight of garbage and open drains are aplenty.

Each pair of hands, whether young or old, contributes towards the meagre joint-income these households muster to make ends meet. So a male child in school would mean less income and a female child studying would mean less help for her mother in doing household chores, and also a bit of a burden when it comes to her marriage.

While mentoring these students, I also observed some sensitive issues which I believe have led to polarisation in this society. Once I asked my mentees to tell us all one secret which their other friends do not know. All the kids spoke about trivial tit bits, except one who later confided that despite being a Muslim he lives in a Christian colony, which is embarrassing. I asked the reason why, to which this kid bemoaned that Christians are smelly. In response, I narrated a quote from a brilliant novel, Our Lady of Alice Bhatti by Mohammed Hanif,

“If they (Christians) have unpleasant body odour, it is because of cleaning the smut defecated by the Muslims.”

We also take our mentees out for trips to factories so they can get some exposure. They can observe people working in various departments, and be informed and made aware about different professions. We visited a food processing unit where we were served snacks, but one of my mentees didn’t touch the food. On the following Saturday all the mentees spoke highly of the aforementioned exposure trip, except this innocuous boy who didn’t eat anything. Upon asking the reason for this, he questioned why we took him to a factory belonging to a minority sect, and claimed they are apostates.

Befuddled by the acerbic remarks of an 11-year-old who knew very little about the real cause and effect of such mental state, I cursed my stars for not judging it earlier. But God gave me strength, and I explained to him that we should make efforts to harmonise and not divide. Later on this kid exhibited remorse, and I believe I prevented one more young kid from becoming a sacrificial lamb in the quagmire of hate as he grows up.

Being outraged, saddened, sickened or berating our society is not good enough. We need to be involved in practical participation in order to become agents of positive change. By volunteering to help those who are underprivileged, we can lessen the class divide and polarisation of our society. I urge everyone to make volunteering a permanent part of their lives.

Addressing the inhibitions, insecurities and fear of the unknown amongst the underprivileged school-going children not only motivates them to keep striving for better, but also helps in building up their confidence and shaping their character at a very early age.

In conclusion, I am sharing a beautiful song by Ali Azmat, which sums up why it is important to find a purpose; a mission in life which could trigger a positive change within an individual and society at large.