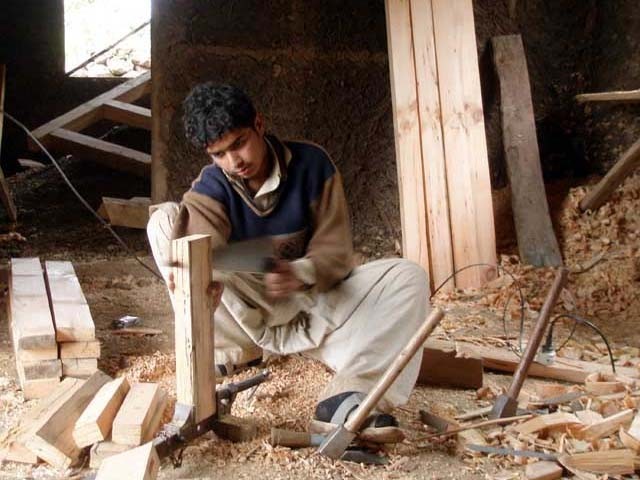 That night, they sat together under the endless night sky and drank tea and ate mithai. Their laughter blossomed in the darkness like fireworks in the sky. PHOTO: E-ARCHITECT

“You’re an old boy now, you’ll have to work. Azeem is a good man. He’ll take care of you and you’ll learn from him.”

Talha could feel the disobedience stirring within him. Working at a furniture shop was the last thing he wanted to do, but he acquiesced to Abba’s decision. He knew Abba wouldn’t listen to him, even if he told him that he wanted to do other things in life. Better things.

Later that night, as he wandered the streets, he thought how it wasn’t Abba’s fault. He was old now and needed someone else to take care of the household expenses. Abba couldn’t rely on anyone else except his own son.

Jamal sat under the prickly sun at the edge of a sidewalk. His head was buzzing with a myriad of thoughts. Memories which he had long suppressed were now drifting through his mind.

Many years ago, when he was still a boy, young and ambitious, he had promised his father that he would accomplish something big in life. He wouldn’t clean up after people like his father did.

“I’m meant to do great things!”

His father’s eyes saddened and his limp body wilted a little.

Jamal’s father passed away when he was 12-years-old. Jamal dropped out of school and started working as a cleaner at somebody’s house. All promises that he made to his father were forgotten, all his dreams were crushed. His life had changed.

Now when he looked at his son, Talha, he saw his own life flashing before his brown eyes. He could see his dreams crumbling. He could see his hope ebbing away. He knew that he wanted a better life, but he also knew that the bitter realities of their life were far bigger than their dreams. ‘If only I could change the world for my little boy,’ he thought.

The long hard summer wore on. And so did Talha’s life. Talha did not like working under Azeem. He was a bitter man and said bitter things. Even the smallest mistakes angered him. Once he didn’t polish the table right and Azeem thrashed him.

“I will throw you out if you don’t work properly,” he snarled.

Another time, Talha incorrectly carved a flower in the wooden frame. Azeem flew into a terrifying rage and a flood of abuses burst out of his mouth. Sparks of resentment sizzled in Talha, but he swallowed his anger. He repaid Azeem’s hostility with indifference.

Talha’s body was covered in cuts. Some were fresh, others had become dark lines on his skin. They would always serve as a reminder of his childhood. Of being beaten and abused everyday. Of his life being torn apart.

On his way back home that night, he wondered if there were other ways to make money.

Jamal was sitting in the courtyard when Talha got home. There was mithai (sweets) in his hands and a full-lipped smile played about his mouth. Jamal couldn’t even remember the last time he saw his son smiling. His sudden smile was like a sun peering from behind the clouds. Jamal had yearned to see his son happy for the longest time.

“Why did you bring mithai, Talha?”

“Because you love it, Abba.”

That night, they sat together under the endless night sky and drank tea and ate sweets. Their laughter blossomed in the darkness like fireworks in the sky.

Talha realised that even as he made more money, Abba still looked sad and older than before. There were more silver strands in his beard than black, his skin clung loosely to his bony frame, his tea-coloured complexion was darker now, like toasted leaves in the sun. Talha didn’t know if anything made him happy anymore.

Meanwhile, another tension was nagging at him. He had been stealing Azeem’s money. At lunch break, when everyone left the shop, Talha stayed back. He made different excuses each day, and they believed him. While they were away, he snuck out a few notes from Azeem’s drawer.

Talha didn’t know what would happen if he got caught, but stealing was almost a habit now.

“I’m only doing it for Abba,” he would say, trying to relieve himself of the guilt.

Deep down in his heart he knew it wasn’t for Abba. It was for himself, so that he wouldn’t have to live a life of hideous cruelty like his father.

“Jamal, your son can’t work at my shop anymore. He has been stealing my money.”

“But he has done such a thing. I won’t ask for the stolen money back, but I won’t let him into my shop again.”

Jamal fought down a hot flush of embarrassment. His face was ashen and anger curdled in his stomach. He couldn’t believe what he was hearing.

The city was washed in the pale white light of the moon when Talha returned home.

“Because Azeem kicked you out?”

Talha’s face turned into a deep shade of red. He looked as if he wanted the ground to swallow him up. His eyes were like pools of molasses and were suddenly full of fear. He was shivering. Jamal felt as if he might break into pieces.

“You can run away from everything, but you can’t run away from life, son,” Jamal said, disappointment rising under his hard voice.

Talha didn’t reply, nor did Jamal say anything more to him. A stony silence slowly descended on them, and words scattered into the dark night.

Later that night, Jamal thought of other friends who would employ his son. He tried to make himself believe that Talha wouldn’t do such a thing again. The rest of the night, he stayed awake listening closely to the silence that spread around him. ‘He only did it for me,’ he thought sadly.