Dear private schools, I am a parent but not an ATM 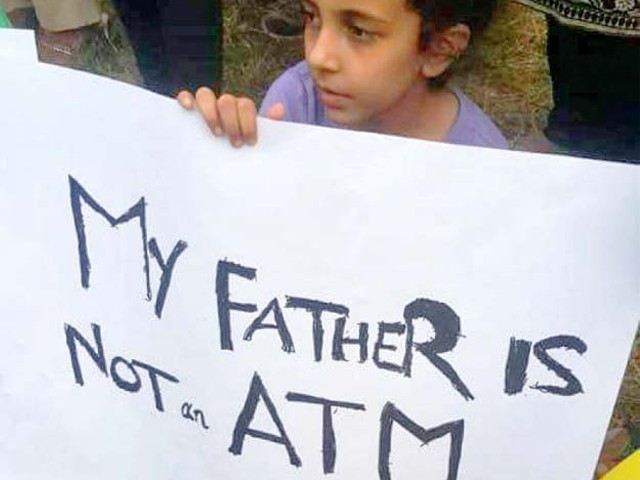 Parents protested with their children against the high-handedness of private schools in Islamabad. PHOTO: EXPRESS

The Constitution of Pakistan has, via Article 25A, made it mandatory for the government to provide free education to all citizens who cannot afford to go to school otherwise. However, implementation of this clause has never been enforced in letter or spirit, allowing the private sector to take advantage of the growing gap between private and public schools.

Now, be it rich or poor, people from all strata of society are sending their children to private schools irrespective of the teaching standard of such schools.

Operating a school has become one of the most profitable businesses in the country, and the mushroom growth of the industry has meant there have been little to no checks on how they are run. Many of these “private schools” are operating in apartments or in small spaces in people’s personal homes, and are devoid of basic facilities. They then charge between Rs15,000-25,000 per month, but despite charging an arm and a leg, they deprive students of drinking water, which kids then have to buy from the school canteen at a price higher than the market.

Schools also have flimsy excuses when it comes to raising fees. After my daughter was promoted to eighth grade last year, I received a quarterly fee challan with a 15% raise. When I raised the matter with the school, I was informed that the fee was only increased by 10%, but as fee for her new grade fell under a higher band, I would thus have to bear a 20% rise in her fee. I did not feel this explanation was justified, but nonetheless I consented.

Many people like myself quietly kept paying more money whenever a rise in fee was announced. However, recently, 400 parents whose children attend one of the private schools took the lead and protested the 14% fee hike by sitting outside the school for long hours and sharing their grievances on social media. The school responded to the protest by going back to the original sum for the year with a notice stating that parents who could not afford the increased fee should enroll their children in another school from the following year. There were also reports that the children of the protesting parents were made to sit in separate classrooms devoid of basic facilities.

Unfortunately, such incidents are not restricted to Karachi but are spread across all major cities in Pakistan, including Lahore and Islamabad. This national crisis prompted parents to knock on the door of the court of law for justice. After protests did not bear desired fruit, petitions were filed in courts.

The Sindh High Court, in its decision on September 3rd, bound schools to restrict fee hikes to 5% per annum, as well as regularising the fee structure and returning the excess amount charged by them in the past back to the parents. Instead of following the court’s order, schools instead went to Supreme Court with a plea to overturn the High Court’s decision. It remains to be seen what the highest court of the land will decide.

Additionally, many schools these days require parents to submit the fee for an entire quarter (three to four months) together. Not only is this a mammoth task in itself, particularly for salaried individuals, but this alongside the price hikes makes life extremely difficult for parents.

Parents are not going overboard and have no intention of getting schools nationalised – our only plea to schools is that they consider parents as the human beings they are and not treat them like an ATM. Most parents have a fixed income, they already struggle to get their children a good education, and frequent and excessive hikes make it difficult to provide for the family while also sending their kids to school.

Private school owners are in the business to make money selling an education. Their sincerity can be gauged by the fact that while they continue to receive the fee according to their own demands, they have stopped annual increments of teachers. In Sindh, a teacher’s salary should ideally be equivalent to the school fees of four students, but private schools are blatantly violating this as they know no one will question or challenge them.

A lawyer appearing on behalf of private schools argued that Article 18 of the Constitution is violated if restrictions are imposed on the fee hike, but this article allows businesses to operate within the rules and regulations set by the regulatory body. Schools are bound by law to get their fee structure approved by the education ministry, but rarely do they follow this requirement.

I would argue that if a cap of 5% is fixed for an annual fee hike, it will not put the operation of schools in any jeopardy and will also be a manageable rise for parents. After the 18th constitutional amendment, education is now a provincial matter. I hope the provincial government will now wake up and enforce stringent regulations for private schools to function.

In the past, survey teams from the education ministry used to regularly visit private schools to monitor the standard of education and to check if schools were providing basic facilities to students. This practice needs to be revived, as currently officials take bribes and overlook their jobs by allowing schools to operate without fulfilling basic requirements.

The government has failed to provide children with a good education, which is directly responsible for the increase in demand for private schools. In light of its own failure, the state should also support such schools by reducing taxes on them and assisting them with basic utilities through the residential slab instead of the commercial slab, as such measures will subsequently take away some of the burden from parents’ shoulders.

After all the money we pay for our children to attend private schools, it is still not enough as we now have a ‘tuition culture’ which dictates children attend multiple classes after school which only adds an extra financial burden on parents. Private schools need to introspect and do better instead of simply looting money while also not delivering results on their own.

Parents are in a catch-22, because at the moment there is no alternative to sending your children to a private school. The solution for some is to work multiple jobs to make ends meet. If the Supreme Court fails to give relief to parents, life will only get harder.

I hope the government can work to improve public schools so parents are not left without options when it comes to providing quality education to their kids. I hope the court will understand the grievances of parents and will facilitate their concerns. But most importantly, I hope private schools stop treating parents as clients and start thinking of them as partners or facilitators, as both share the same end goal: educating a young mind and shaping him or her for a bright future.