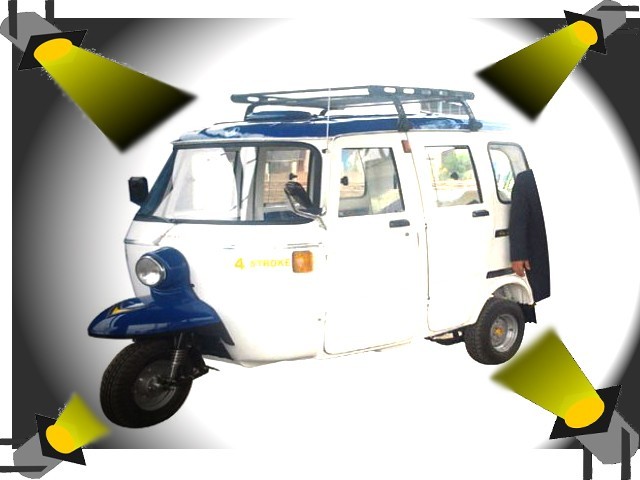 Taking a ride in this fashionable Rik wasn't any different from travelling in a regular rickshaw. It was just as noisy and bumpy. DESIGN: ERUM SHAIKH

Travelling around by rickshaw is something most Pakistanis, especially ones in the cities, are used to. Travelling through a ‘Rik’, though, is an entirely different experience!

When a colleague told me about the Call-a-Rik service, I immediately decided to give this new addition in the public transport of Pakistan a try.

I visited the website of the service and found it be very distasteful. They definitely need a better web designer, but I digress.

The purpose of my visit was to gather some information about the service and to book a ride. That, the website served well. The online booking form was simple and brief. However, instead of receiving the confirmation after few minutes, as the website promises, I received it after a few hours─ just 15 minutes prior to the time I had to get picked up.

Online services in Pakistan are not usually that fast, so I ignored the delay. The real issue was to explain the address to the customer service executive. I was expecting that the person must have gone through the maps before calling me, but it appeared as though he wasn’t fully aware of the area and finally asked me to walk to a nearby bus stop.

This was utterly disappointing because the one thing that tempted me to make use of this service was that they would pick me up from my doorstep.

I reached the decided point, waited for the Rik, and it was there on the mentioned time. There was no delay – none at all and I emphasise this point because in Pakistan people don’t usually care for punctuality. Thus, this was a big win.

Let me tell you something; pictures never tell the truth.

The same is true for this Rik.

As promised, the vehicle did have door with locks. It was clean, the seats were comfortable and there was space for stretching your legs – a little. Yet, the interior of the Rik was not well-polished and looked unfinished. There were pegs sticking out which could injure children travelling in it.

There was an LCD in front of me (though a mini one) and there were two headphones at each corner. I now regret that I didn’t ask the driver to switch it on for me. Since I didn’t see the results, I can’t comment on the video or audio quality.

Taking a ride in this fashionable Rik wasn’t any different from travelling in a regular rickshaw. It was just as noisy and bumpy.

However, I must say that it was really a safe ride, as they promised. The driver was not chatty like normal rikshaw drivers; he was very respectable towards me and did not interact except for confirming the route. Since the Rik is closed from the sides, I didn’t have to worry about people looking straight at me – although people were looking at the Rik in amazement because it looks so different! I felt quite secure knowing that my privacy was protected.

I discovered a real flaw in the service just after the ride had already begun─ the meter reader wasn’t working.

With no functional meter reader, I couldn’t see the number of kilometres I travelled. This left me sceptical about whether they really charged me Rs10 per kilometre or not. I say this because a regular rickshaw driver took some Rs50 less than what I paid to them, for the same journey.

If you are looking for an excellent and prompt door-to-door service with a reasonable fare, Call-a-Rik isn’t the answer to your problems. However, with regards to safety, security, and comfort, I give it 10 on 10.

Despite the few issues I faced during the ride, I still liked the idea of an online rickshaw service and do intend to use it again. I would strongly encourage girls to travel by a Call-a-Rik at least once. Remember to confirm the fare beforehand and do ask them to send a Rik with a working meter reader. Check the kilometres through Google maps and make sure that they aren’t charging you extra.

After taking these precautions, I assure you that you’ll love the security you feel while travelling in a rickshaw with closed doors.

A researcher by profession with particular interest on subjects related to feminism. She tweets @Fiza555