At the time of writing this article, the trailer for The Legend of Maula Jatt (LoMJ) has already garnered around three million views on multiple accounts on Facebook, around one million views on YouTube, and more than a million views through different reaction videos. It has generated the hype it truly deserved.

Anurag Kashyap was one of the first ones to tweet about the trailer, while the likes of Karan Johar, Alia Bhatt and Sonam Kapoor are full of praise for what they have seen.

Fawad this looks amazing!!!! Congratulations and am sure it will be a massive success!!! 💪😎😎❤️🔥 https://t.co/TOHf0uOxJn

This is Fawad Khan’s first film since returning from greener pastures, Bilal Lashari’s second venture after the trendsetting Waar, and Mahira Khan’s reunion with Fawad. What’s not to look forward to? It has something for everyone; even for someone like me, who thought Waar was overrated and disjointed (even though very well treated).

Before moving further, let’s address the elephant in the room. I have seen numerous posts leaving comments like:

(This is a copy of Gladiator)

My simple answer to whoever says that to me is:

(So you could have copied it!)

Whether or not it is copied, has the Pakistani audience seen Fawad in this avatar before? Has the Pakistani audience been privy to this scale on the big screen by a Pakistani film before? The answer is a plain and simple no. Teefa in Trouble was a big film, but even that does not come close to the scale Lashari has brought to the screen. It might not be at the level of Baahubali, but it’s close to KGF, which is already breaking record after record. 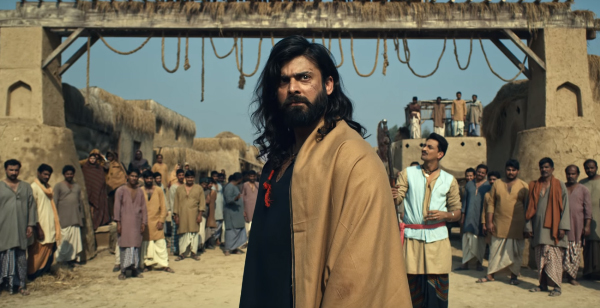 Undoubtedly, LoMJ looks grand. However, what’s important is the substance behind the froth. It doesn’t look grand for the sake of it; effectively meaning it does not look like Thugs of Hindostan or Tashan. It looks rustic. It looks raw. It looks audacious. It does not look like a remix by Neha Kakkar; it looks like a remixed track by Tiesto. It does not look like what Farhan Akhtar’s Don was to Chandra Barot’s Don; it looks more in line with Guy Ritchie’s Sherlock Holmes to Alfred Werker’s The Adventures of Sherlock Holmes; essentially improving a classic in modern times. Does it also have the potential to become Ram Gopal Varma ki Aag? Yes, it does.

Remaking a classic is a daunting task. Expectations are high and there will always be some purists who will never be happy, no matter how well you do. Agneepath, for example, was a very good remake; however, it also faced criticism for removing the character of Krishnan Iyer.

Fawad’s look is on point; his hair, not so much. However, his intensity is contagious. My forehead had a frown while watching his trailer, and for no reason at all really.

Hamza Ali Abbasi looks closer to Khilji of Padmaavat, and to be honest, falls slightly short of Fawad in the trailer, particularly in that laughter scene. Perhaps he is supposed to?

Mahira is there, albeit overshadowed by Humaima Malick’s slyness. Gohar Rasheed looks evil, and Nayyar Ijaz even more so.

Sreejesh Nair’s soundtrack speaks for itself, and is probably going to be 50% of the ticket’s worth. I would also not have been surprised if the characters started speaking Dothraki, but why not?

One of the toughest tasks of the film was the makeup, and boy have Maram and Aabroo lived up to the task, barring Fawad’s hair. Did I mention his hair looks out of sync?

The trailer of LoMJ is thus everything it was expected to be and then some. Will it make commercial sense? Let’s have a look.

Firstly, it’s an expensive film. That scale and grandness does not come cheap. In order to make money, it will have to become the highest grossing Pakistani film ever. Not just the highest, but highest by a mile.

There are still two problems with the film though – starting with the language. It’s 100% a Punjabi film, just like the original. How the audience from Sindh and Khyber Pakhtunkhwa will react to a national level Punjabi film remains to be seen. If Shaan Shahid is to be believed, Karachi already has a problem with films being made in Lahore, let alone a Punjabi film.

Secondly, if the rumours are true, there are no songs in the film. A film without a song in today’s time is, once again, audacious. In front of LoMJ will be Wajahat Rauf’s third film, taking around 20-30% screens out of the 130 or so available. Rauf’s film is a comedy entertainer with a relatable young cast. Can that topple the grandness of LoMJ? You never know.

Maybe the only reason for Maula Jatt not working at the box office will be Maula Jatt itself.

The Legend of Maula Jatt is set to release on Eidul Fitr 2019.