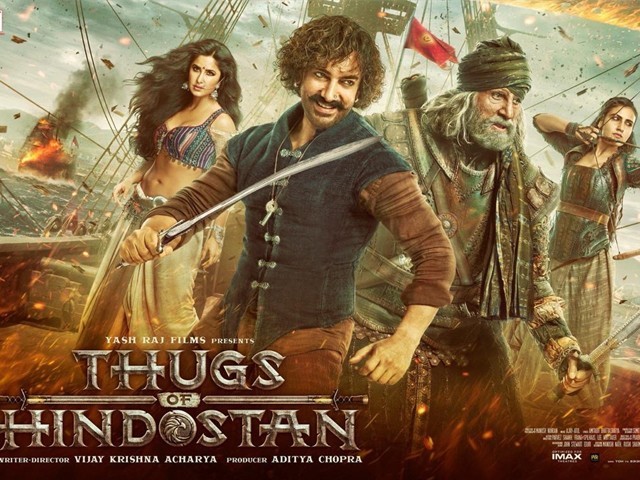 Ahead of the release, the film created quite a storm but with the release of the film, one can feel just a slight stir. PHOTO: IMDB

Thugs of Hindostan is highly inspired by Pirates of the Caribbean. The film is set against the backdrop when the British East India Company started colonising the country.

The British Company manages to annex Ranakpur by assassinating its ruler Mirza (Ronit Roy) and his son Aslam. The trusted Lieutenant of Mirza, Khudabaksh Azaad (Bachchan), flees from the British’s impending hegemony and takes along Mirza’s young daughter Zafira (Shaikh) with him. What follows is resistance from Khudabaksh and his band of thugs who encounter this seizure with bravery and aspire to free the country from the clutches of the British. On the parallel route is the double-crossing mercenary Firangi Mallah (Khan), who is hired by the British to find and capture Khudabaksh.

Khan plays the role of Firangi, a character borrowed from Jack Sparrow of Pirates of the Caribbean. Firangi is a two-faced trickster with kohl-laden eyes, a nose pin and earrings. Betrayal and duplicity for the sake of personal motives are Firangi’s inevitable traits. How his conflicting impulses trouble him and affect his decisiveness determine the entire plot of the film.

Although Khan impresses the audience as Firangi by providing a sense of comic relief, he fails to bring in the required subtlety and charm. The writing of the character left the layers of Firangi unexplored given the apparent complexity of the character. In spite of the fact that filmmakers have invested much time on Firangi’s dissection, Firangi is nowhere close to Jack.

Bachchan, on the other hand, plays the high-headed and invincible warrior who believes in the idea of freedom not as a dream but as a firm belief. The entrance of Khudabaksh in the film is not only dramatic but exhilarating. Even the stunts performed by Bachchan’s dare-double in the first half are amazing. However, Bachchan, despite being known for his extraordinary roles, fails to bring in the realism and solemnity to his character. He is unable to bring in the heroism, patriotism and burning desire of freedom in his character of Khudabaksh.

Shaikh is aggressive as Zafira and has some great action sequences while Kaif as Suraiyya does some quite difficult dance steps and raises the glamour quotient, but these female characters have not been given much significance as Khan remains the highlight throughout.

Ahead of the release, the film created quite a storm but with the release of the film, one can feel just a slight stir. The massive and majestic canvas lacks the integral ingredient of the plot. The screenplay is vapid, the storyline is perforated, the editing is poor, the direction is not enterprising and the dialogues are not worth remembering. The craft of storytelling has been clearly compromised at the hands of a big-budget production that banks solely on the visual appeal and action sequences.

Although the characters enjoy the luxury of sumptuous wardrobe and larger-than-life shots and sequences, their emotional intensity is missing. Even Ajay-Atul’s soundtrack and the background score are forgettable.

Apart from of the several loopholes, one cannot deny the thrilling spectacle that the film offers. The dramatic detours of the film are overloaded with visual allure and impact. The costumes, the fight scenes and the sets are fine as long as not compared with Pirates of the Caribbean. The special effects are not up to the mark but the cinematographer has done a decent job with capturing certain moments. Furthermore, the deviousness of Firangi creates some sort of suspense in a highly predictable and cliché-driven script. Not to forget, the choreography of the songs like Manzoor-e-Khuda and Suraiyya is intricate and unique.

Regardless of the fact that the ship of the film sails on the sheer size, grandeur and star cast for the most part, it sinks in deep waters of the hollowness because of a feeble narrative and weak direction. Certainly, there is no substitute for a strong script and that is where the overall film falls pointless and listless.

Even the Khan-Bachchan collaboration for the first time in the history, their contrasting characters of a loyalist and a betrayer, the mammoth size and scale of the film and action scenes could not prevent the audience from drowning in dismay.