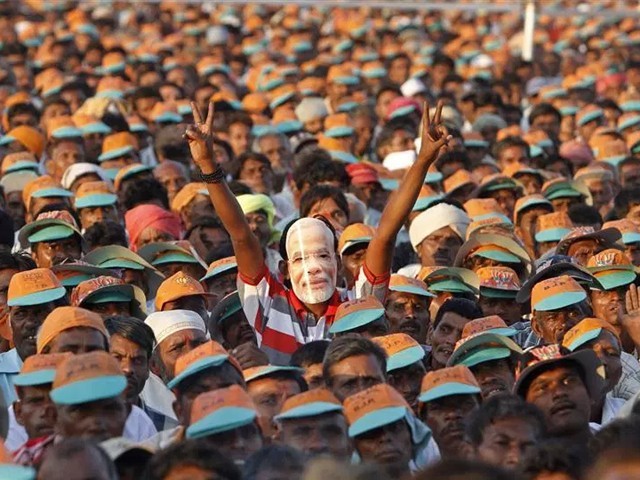 Despite the victory, Modi’s political stature has not grown. PHOTO: REUTERS

The headline, “The BJP lost in victory, Congress won in defeat”, from a local newspaper in Gujarat, sums up the result of the Gujarat election held yesterday.

The official winner of this election may be the Bharatiya Janata Party (BJP), but the de-facto victor is definitely the Indian National Congress party. While it is true that the BJP retained the state for the sixth time in a row despite facing a strong anti-incumbency wave, nonetheless, the results came as a surprise.

Prime Minister Narendra Modi has built his entire political persona by selling the ‘Gujarat model’ to the nation. However, Gujarat itself came to question that model, as seen in the results of its election. Out of 182 seats, the BJP got only 99, a loss of around 20 seats and its lowest tally since 1985.

On the other hand, Congress managed to get 77 seats; a jump of almost 4% in its vote share as well as its highest score in Gujarat in the last three decades.

Why was the Gujarat election important?

Gujarat is the home state of Prime Minister Modi and BJP President Amit Shah. This is the state which gave Modi notoriety and popularity. His three successive wins as chief minister of the state since 2001 consolidated his position as the prime ministerial candidate of the BJP in the 2014 elections. He marketed the Gujarat model of economic development and promised a vision of economic reform before he became prime minister.

However, in the 2017 elections, all sections of society arose questioning the Gujarat model. For Modi, this questioning from his own constituents was a big challenge – he could not answer them. Instead, he tried to run a very divisive campaign by bringing in emotion to counter political challenges.

For a long time, Gujarat has been the laboratory of Hindutva politics. The BJP, since the 1980s and particularly after Modi became chief minister, tried to entrench itself in the state by polarising voters in the name of religion. In 2002, the religious riots in the state under Modi’s governance consolidated the BJP’s hold on hard-line Hindus, and he reaped electoral dividends from it year after year.

It was this ‘laboratory’ which came to be challenged by the people of Gujarat. The verdict shows a strong discontent among people against the BJP, and the Congress party is the winner by default in the midst of this anger.

Is Modi truly the victor?

Modi staked all his political capital in the state. Had he lost the elections, it would have been an end to his narrative. However, while the victory saved face for both Modi and the BJP, it has exposed the chinks in his armour and has made him look more vulnerable than ever before.

The surprisingly good performance of the Congress and its party chief, Rahul Gandhi, indicates that Modi will now face a resurgent opposition and future elections will no longer be a walk in the park.

The election also exposed Modi politically. The veneer of modernity and neutrality that he has been maintaining vis-à-vis religious minorities got exposed through his divisive campaign.

By bringing Pakistan into the campaign, Modi betrayed his rabid, divisive instinct as he openly tried to polarise voters. He has frequently used Muslims and the ‘Pakistan card’ to consolidate his vote bank, and unsurprisingly, he did so yet again.

Despite the victory, Modi’s political stature has not grown. On the contrary, he is being questioned because of the reduced margin of the victory.

What does this mean for the future?

There are quite a few assembly elections due in 2018, with the most crucial being Madhya Pradesh, Rajasthan and Chhattisgarh, all governed by the BJP at the moment. If one looks at this Gujarat experience and the way the party was pushed against the wall despite it being its bastion, retaining three states will now be tougher with an opposition that is resurging.

Many experts believe that a beleaguered Modi would resort to greater polarisation and anti-minority politics to remain in counting for the 2019 elections. Liberals, secular forces and religious minorities in India were all looking towards Gujarat with lots of hope, and it has, in a way, redeemed itself by delivering a strong message to India that those who indulge in polarisation and majoritarian politics will weaken and will eventually be defeated.

This result becomes more important in light of addressing the growing religious communalism in India and stopping the social atmosphere in India from being vitiated further. In that sense, the verdict in Gujarat remains in favour of Congress, suggesting that the losing party may have won after all.