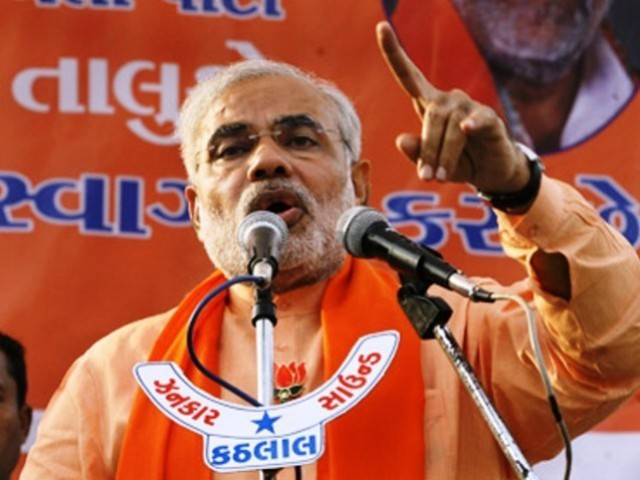 Modi needs to win back millions of liberal Indian voters, without whose support he will find it impossible to become India’s Prime Minister. PHOTO: AFP/FILE

Hindu nationalist leader Narendra Modi, who has been crowned as the prime ministerial candidate of India’s main opposition Bhartiya Janta Party, must have had many a sleepless night since 2002.

A shocking incident in the town of Godhra in which 59 Hindus, mostly pilgrims returning from Ayodhya, were burnt alive by a Muslim mob in a well planned conspiracy, triggered anti-Muslim riots in Gujarat which left more than 1,000 people, mostly Muslims, dead right under the nose of Chief Minister Narendra Modi.

True, so far no evidence suggesting his direct involvement in the riots has been found and he was given a clean chit by a special investigative team (SIT) appointed by the Supreme Court of India to probe into the case. However, the same Supreme Court once likened him to Nero, the emperor who fiddled while Rome burned. Modi’s close aide Maya Kodnani was convicted last year and sent to jail for 28 years. Modi denies any wrongdoing.

In an interview given to Reuters in July this year when asked if it was frustrating that many people still define him by 2002, Modi said:

“People have a right to be critical. We are a democratic country. Everyone has their own view. I would feel guilty if I did something wrong. Frustration comes when you think, ‘I got caught. I was stealing and I got caught.’ That’s not my case.”

The truth is no matter how much Modi tries, the ghost of Gujarat riots will continue to haunt him all his life.  Being the head of the state, it was his basic duty to save as many lives as possible and provide adequate protection to the Muslims. His failure in this regard cannot be ignored and pardoned which resulted in the deaths of so many innocent Indians. The fact of the matter is, even if he somehow becomes the prime minister of India the foul fiend of Gujarat riots will torment him wherever he goes and make his life miserable. Surely there’s a pressing need to save Modi from his predicament and show him the right path. What to do?

“All the perfumes in Arabia cannot wash away the stain on Mr. Modi.” Justice Markandey Katju wrote in his paper.

I, however, beg to differ with Justice Katju on this, for I believe the stain on Modi can be washed away. All he has to do is to follow the path shown by Mahatma Gandhi. Only Gandhi can help Modi in his troublesome situation. After all, the great soul had a solution to every problem.

Modi ought to repent for his past sins.

Why do I think so?

Simply because in his autobiography The Story of My Experiments with Truth, Gandhi writes:

“A clean confession, combined with a promise never to commit the sin again, when offered before one who has the right to receive it, is the purest type of repentance.”

Gandhi explains this through a personal example in his autobiography.

Whilst Gandhi was studying at the High School in Rajkot, a relative and he became fond of smoking. But they had no money. So they began pilfering stumps of cigarettes thrown away by their uncle. The stumps, however, were not always available, and could not emit much smoke either. So they began to steal coppers from the servant’s pocket money in order to purchase Indian cigarettes.

But, much more serious than this theft was committed when he was fifteen. In this case he stole a bit of gold out of his brother’s armlet.  Gandhi had run into a debt of about twenty-five rupees. His brother had on his arm an armlet of solid gold. It was not difficult to clip a bit out of it.

Well, it was done and the debt was cleared. But this became more than Gandhi could bear. He resolved never to steal again. He also made up his mind to confess it to his father. But he did not dare speak. Not that he was afraid of his father beating him. Gandhi was afraid of the pain he would cause him.

Still, he felt that the risk should be taken; that ‘there could be no cleansing without a clean confession’.

At last he decided to write out the confession, to submit it to his father and ask for his forgiveness. He wrote it on a slip of paper and handed it to his father himself. In this note not only did Gandhi confess his guilt, but he asked adequate punishment for it, and closed with a request to his father not to punish himself for his offence. He also pledged never to steal again.

Gandhi was trembling as he handed the confession to his father who was then suffering from a fistula and was confined to bed. He handed him the note and sat opposite the plank.

His father read it through, and pearl-drops trickled down his cheeks, wetting the paper. For a moment he closed his eyes in thought and then tore up the paper. Gandhi also cried. He could see his father’s agony.

Those pearl drops of love cleansed Gandhi’s heart and washed his sin away. Only he who has experienced such love can know what it is.

As the hymn says:

Who is smitten with the arrows of love,

This was, to Gandhi, an object-lesson in ahimsa (non-violence).

“Then, I could read in it nothing more than a father’s love, but today I know it was pure ahimsa. When such ahimsa becomes all-embracing, it transforms everything it touches. There’s no limit to its power.”

This sort of sublime forgiveness was not natural to his father. Gandhi had thought that he would be angry, say harsh things, and strike his forehead. But he was so wonderfully peaceful, and Gandhi believed this was due to his clean confession.  Gandhi knew that his confession made his father feel absolutely safe about him, and increased his affection for him beyond measure.

Modi should also understand that only repentance can lead to his redemption; there’s no other way. He ought to understand that a clean confession, combined with a promise never to commit the sin again, when offered before one who has the right to receive it, is the purest type of repentance. In this case Indian Muslims have the right to receive a public confession and promise from Modi. He should reach out to the Indian Muslims and apologise for his failure to protect innocent lives in 2002, and promise that such a mistake would not be repeated in the future under his regime. Modi should assure them that he will treat the Muslims as his own brothers.

Justice should not only be done, but should manifestly and undoubtedly be seen to be done.

In this way Modi will not only bring closure to the painful episode of Gujarat riots, but will also be able to win the trust, confidence, and most importantly respect of millions of liberal Indian voters, without whose support he will find it nearly impossible to become India’s prime minister.

In an interview given to Indian Express Editor-in-Chief Shekhar Gupta in his talk show Walk The Talk in 2004, Modi was asked whether he should be introspective in his conduct the way Gandhi had been. To this, the Gujarat Chief Minister said:

“I think it is beyond me to match up to Gandhiji. I believe in his path and in him as a great person, but how can I say that I can reach there?”