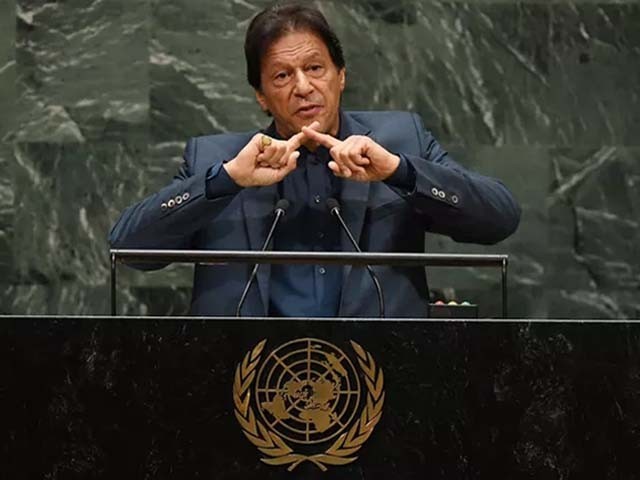 Imran Khan speaks during the 74th Session of the General Assembly at UN Headquarters in New York. PHOTO: AFP

Now that the adrenaline from listening to Imran Khan’s powerful speech at the United Nations (UN) has subsided, it is a good time for some introspection. India’s descent into fascism has caused justified outrage amongst the people of Pakistan. Its treatment of a minority Muslim population has filled our hearts with pain. But has it also awakened us to the hypocrisy of our nation?

We ask the world to step in to save Muslims in India, but we also want ambivalence from the world towards how minorities are treated in Pakistan. Last year, when America added Pakistan to a list of serial violators of religious freedom, our reaction was quite similar to India’s – shameless denial. Minorities are free in Pakistan, we said, much like India is saying now. But just like India’s claim today, our claim rings hollow.

I have previously pointed out that we cannot expect Western powers like the United States (US) and European Union (EU) to take us seriously when we talk about human rights violations, primarily because of our own abysmal record with regards to our religious minorities. Our commitment to liberal democratic values is directly proportionate to the strength of our voice in the international community: especially when talking about the human rights violations of our neighbours. It is therefore necessary that we change the way religious minorities in our country are forced to spend their lives. Only then can we not be labelled as hypocrites.

Pakistan’s religious minorities face discrimination because of a systematic institutional bias against them, or, by social prejudices that the state is doing nothing to address. As we exit Muharram, we should spare a thought for the treatment that the Hazara Shia are forced to endure in our country. The Hazara are attacked every year because of their faith and their killers usually celebrate the events through social media posts while the state looks away. When in April of this year the Hazarganji vegetable market in Balochistan was the target of yet another terrorist attack, Balochistan’s home minister, in a marvellous display of shameful denial, said no specific community was the target of the attack. Such state complacency in protecting religious minorities is just as bad as state proactivity in persecuting them. If we blame Narendra Modi for turning a blind eye towards the violence against Muslims on the streets of India, then we must also blame our own government for violence against members of the Shia faith on our own streets.

In Pakistan, a citizen’s faith bears more consequences on his quality of life than it should in any country that promises religious liberty in its constitution. It has become far too commonplace for us to hear about Christians being burnt alive in brick kilns and Hindu children being murdered. In such an environment of deep-seated prejudice it is ridiculous that people are forced to declare their faith to obtain vital documents or to attain employment with the government. A ruling by the Islamabad High Court last year stated that a failure to declare your faith was a ‘betrayal of the state’. The ruling was directed towards Pakistan’s most persecuted religious minority: the Ahmedis.

Members of the Ahmedi faith have been subjected to a legal and social regime in Pakistan that parallels the apartheid regime in South Africa. Discrimination against them on the basis of religion has been blessed by all three pillars of our state. When things like this exist, it is hard to take Pakistan’s stance on the treatment of religious minorities elsewhere seriously without accusing it of double standards

Even when the highest court in our land pronounces that we must do more to guarantee religious freedom, we barely raise a finger in action. It has been five years since Chief Justice Tassaduq Hussain Jillani decided SMC No 1 of 2014. In that judgment, he laid out a number of changes that the state of Pakistan had to make in order to fulfill the constitution’s promise of religious liberty. Outraged by the attacks on Chitral’s Kalash tribes, the massacre of Hazaras, and attacks on churches and temples, Jillani decided that a federal task force has to be created to encourage tolerance amongst the people, a special police force be created for the protection of minorities’ places of worship, the education curriculum be reformed, quotas for minorities be established, and punishments be implemented for hate speech. We still await the enforcement of this judgment.

And while there are sharp intakes of breath in Pakistan over Muslims being lynched in India over consuming beef, let’s remember that our justice system is moulded to repress any action that signals disagreement with the fundamentals of Islamic theology. This has caused our people to hold even 12-year-old girls like Rimsha Masih on charges of burning sacred text on concocted and fabricated evidence. No law in our books is abused more than the Penal Code’s provisions of blasphemy. While there was some glimmer of hope when Aasia Bibi was acquitted last year, we must also confront the reality of the right-wing backlash that followed. We have to come to terms with the fact that many people in Pakistan agree with, and actively want, to subjugate religious minorities. That is the degree of intolerance towards other religions we have reached.

Modi’s India has put us on a crossroads. We can either commit to be better than our neighbour and commit to change, or, we can be hypocrites, wailing at the abuse of human rights abroad while being conspicuously silent regarding the skeletons in our own closet.