Property for sale, unless you are a non-Muslim 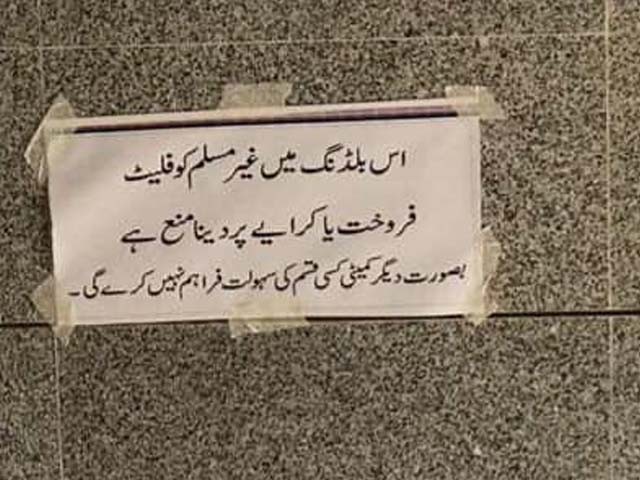 A friend of mine was told to vacate his premises, along with his family, because the neighbours did not want a Hindu family living in their locality. PHOTO: TWITTER/ OMAR R QURESHI

It is no secret that Pakistan has an abysmal record when it comes to protecting religious minorities and ensuring that their rights are safeguarded. But legislation and government action can only do so much; ultimately, it is the attitude of the masses which will determine whether we as a nation wish to protect religious plurality or not. Thus far, that seems rather unlikely. A torrential downpour of blasphemy cases, forced conversions and the fleeing of religious minority groups from Pakisatn has only led to the increasing marginalisation of those who belong to a religious minority in the country.

There is however a misconception that such bigotry and vitriol lingers only along the fringes of the nation and is a sentiment which is not echoed in the urban centres of Pakistan. Unfortunately, this is simply not the case. A recent example of discrimination against non-Muslims in Pakistan came to the fore when some pictures began to do the rounds on social media. The images show a sign on display in an apartment building in Karachi which states that non-Muslims cannot rent or purchase the apartments. Regrettably, for non-Muslims in Pakistan, this is not a new phenomenon, although I would have hoped for something better from a metropolitan and diverse city like Karachi.

But we can't criticize India and overlook this pic.twitter.com/yPPxgxWnNC

Another example of non-acceptance and biased mindset against peace and hatred towards non-Muslims as Machiyara Residency, khilque ul zaman road , Clifton block 8 Karachi notices that Non- Muslims cannot be provided residence in the building.cpoied pic.twitter.com/KdRjFRSOI3

This incident reminds me of my personal struggle of trying to get a place in Islamabad. At the very last hour, a proprietor in Islamabad told me that I could no longer acquire the property because I was a Hindu, and he said that he was afraid I would perform my religious activities which could ‘harm’ his religious beliefs. Truth be told, I have learned to ignore such attitudes and pay little heed to them. But it is deeply worrying when such incidents impact families and children. A friend of mine was told to vacate his premises in Islamabad, along with his family, simply because the neighbours took issue with the fact that a Hindu family was living in their locality. More than anything, I worry about how that will impact his children and shape their perceptions about the country they call home. Being born a non-Muslim in Pakistan comes with a cost, and being a Hindu is simply the ‘icing on the cake.’ You will often be called a traitor, an Indian, and will be considered an inferior individual.

I have regularly been lectured by others on how I should convert to Islam and how I must keep in mind that I live in the Islamic Republic of Pakistan. But does living in an Islamic republic mean that the masses will not protect the rights of religious minorities?

In hindsight, not allowing the sale of property on religious grounds is not only limited to non-Muslims. Muslims who belong to the Shia, Ismaili or Ahmedi sect also have to contend with similar problems in Pakistan. This ostracisation has resulted in many of the individuals belonging to these sects residing in particular localities or to set up their own housing communities. It goes without saying that this religious discrimination extends into all facets of social life, and many shops also refuse to sell their products to those who they see as ‘others’. All this only leads to a further stratification of society and further reinforces societal divisions. The very motive which drives individuals to deny people access to a property on religious grounds is to not only protect their own sense of ‘religious puritanism,’ but also to make others aware that their religious beliefs are not welcome.

Meanwhile back in Pakistan. pic.twitter.com/L6YTqx8P5Y

Now, an argument which is often presented in order to try and justify this kind of behaviour is to point one’s finger eastwards towards India and argue that Muslims in India find it very difficult to purchase property. While this is undeniably true and should be condemned, two wrongs do not make  a right. Prejudice against a religious group in one country does not give adherents of that religion the right to discriminate in another country.

Furthermore, violent incidents against non-Muslims, like what happened in Ghotki, have led to the migration of many Hindu and Christian families from rural areas towards the urban centres of Pakistan. But, if even up scale localities in these metropolitan cities are reluctant to house these individuals, then what fate do you think awaits them? In this time of easy hatred, we all need to stand for each other’s rights and protect the diversity and plurality promised by our founders as the central pillar of Pakistan.

The author is an educationist and a freelance trainer. He tweets as @RKGujar.

Why can’t a non-Muslim dream of becoming the prime minister or president of Pakistan?

Can Ghotki and Pakistan ever rise above bigotry and religious prejudice?

My journey as a Pakistani-Hindu