India has never looked as divided, as communally vulnerable, as broken as it does now 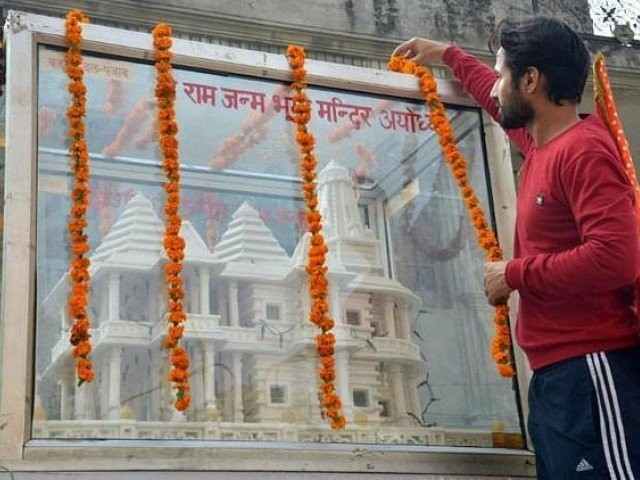 Hindu hardliners have been calling for a Ram temple to be built on the site of the Babri Mosque, which was demolished in 1992. PHOTO: AFP

Narendra Modi, a serial communalist, assumed the mask of an inclusive figure just before the 2014 Elections to make him more acceptable to the masses. The myth he came to weave around himself five years ago made him seem like a man of development – the only mission in his life being to usher in a new era of economic reform in India.

It is now 2018, and the mask and the myth are both in tatters. The one and only colour Modi has is called saffron – the colour of the majoritarian Hindu. It’s now known to one and all that the only politics Modi knows is the politics of divisiveness.

After all, India has never looked as divided, as communally vulnerable, and as broken as it does now. Economically too, the country looks to be a wounded nation. People have never looked at banks with as much suspicion as they do today. They have never felt so insecure about their hard-earned money as they feel now. Foreign investment is at an all-time low, export has not made any progress in the last four-and-a-half years, while the informal economy – the backbone of the system – is rendered completely useless. The government, in order to hide its failures, has started fudging with the gross domestic product (GDP) data to create another myth: higher growth. The GDP data has never looked this untrustworthy either, which is why the international community is also unwilling to accept the government figures at their face value.

How does a ruling party win an election when it doesn’t have anything substantial to show to the people?

The ruling Bharatiya Janata Party (BJP) has a time-tested formula of winning elections despite a lack of progress, and that is by polarising the voters. And Modi is polarisation personified.

In Gujarat, when he was the chief minister of the western Indian state, he managed to swing all three elections the province fought in his favour by injecting a heavy dose of division in the people. The state has become a laboratory of polarisation. Over time, Modi and his party have only wanted to try this trick at the national level.

The emergence of temple politics at the far end of his first political inning in Delhi signifies the BJP want to use the divisive Ram Temple and Babri Masjid issue to gain votes in the 2019 Elections, which otherwise will not belong to the party due to its lack of performance.

However, if one looks at the Modi regime over the past four-and-a-half years, one will realise the government has never actually focused on what people call development. The Hindu right-wing party has been working on a very specific agenda of ‘Hinduising’ the country, by turning what used to be a secular nation into a majoritarian project.

Love jihad, lynching in the name of beef consumption, banning meat shops in Uttar Pradesh (UP), introducing Hindu motifs at public places, changing the pre-Partition names of cities, rewriting history and the almost negligible representation of Muslims in the government and its policies, all clearly indicate the direction this government was headed towards right from the day it took oath in May 2014.

Never before in the history of independent India has a party come to power without having a single Muslim face. In fact, the party blatantly claims to not represent Muslims, and this mindset reflects in the way the government runs.

There is a new breed of media today that complements the government in its sectarian agenda. A large section of private TV channels are operating in India that work as henchmen for the BJP in Delhi. The by-product of this constant media propaganda is the slow and steady radicalisation of common people. As a result, the middle class and a large section of the masses feel unconcerned about the siege the Muslim minority of India is in.

The politics of the temple, therefore, is simply in continuation of the divisive thought-process gripping the Modi-led government.

Last week, the Vishva Hindu Parishad (VHP) or the World Hindu Congress organised a large gathering at the disputed site in Ayodhya in UP, and this mobilisation managed to get maximum optics in India. The VHP want the BJP to build the Ram Temple at the disputed site where the Babri Masjid was demolished by Hindu fanatics in 1992. Otherwise, they threatened that the BJP will no longer remain in power. The Supreme Court is currently looking into the matter.

People are questioning why the BJP remembers the temple issue only at the time of elections, but the answer is obvious: so it can win them.

Modi never utters a word. He does not bother condemning this open and defiantly divisive politics. His silence is all the endorsement his divisive politics needs. The party touched the national consciousness and acquired the entire country’s attention mainly by playing the temple card.

In the 80s and 90s, the BJP exploited the Babri Masjid matter and the resultant polarisation yielded a great harvest for the party. In 1984, the party had only two parliamentarians but soon enough it became a predominant party. It now hopes to retain its base by playing divisive politics as it has thus far.

However, Modi knows the mask and the myth have both unravelled, and one can only hope the rest of India will catch up soon enough.