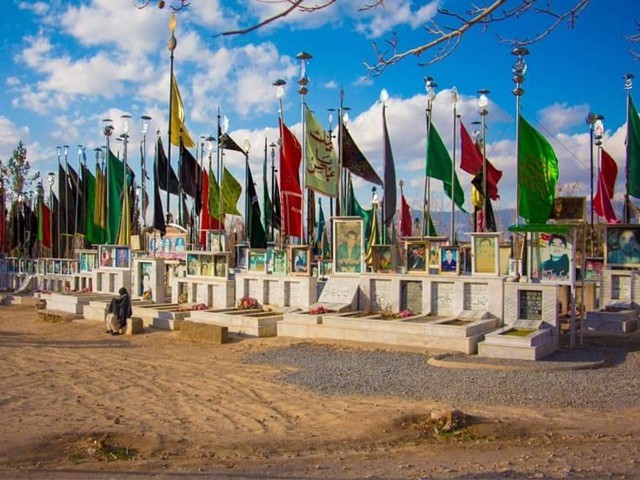 A Hazara graveyard in Mariabad, Quetta. It is said that not a single person in this graveyard has died a natural death. PHOTO: TWITTER/@I_Ahmad_Hassan

In the wake of the recent heart-rending tragedy that befell the Hazaras of Hazarganji, a number of prominent media personalities such as Asad Rahim Khan, Pervez Hoodbhoy, and the relentless political activist Jibran Nasir, came out in vocal support of the highly persecuted minority ethnic group. They openly spoke about the real motivation behind why the community continues to be preferentially targeted by a now annual onslaught of militant attacks, and why its predicament is still met with a rabid form of popular indifference that is nauseating to even consider, let alone make sense of.

Tomorrow morning a few friends and I will be joining the #Hazara sit-in in #Quetta. As activists not only should we show solidarity but we must also dedicate our social media platforms to project the voices and concerns of the protestors whom mainstream media has chosen to ignore

All those who couldn’t stop praising the #NewZealand PM for visiting the terror victims’ families have not much to say for the hapless #Hazara families waiting for justice and killings to stop.
There should be one demand by all Pakistanis with a conscience #StopHazaraGenocide pic.twitter.com/7rOuQdpV69

These individuals, and the many others who have vented their frustration over this unchecked travesty through their field activism, newspaper articles, talk show interviews, or social media condemnations, need to be commended for calling a spade a spade in no uncertain terms.  They have rightly proclaimed that the reason why the Hazara people continue to be targeted so mercilessly in this country is because of their unapologetic Shia identity.

This kind of bravery is very hard to come by in today’s Pakistan, where the vast majority, from the premier at the helm of the state’s affairs to the typical citizen in the country’s streets, mosques, offices and busy marketplaces, goes to great lengths to deflect the issue at hand. The leadership and the masses try to avoid the uncomfortable elephant in the room, and repeatedly belittle all cases of Shia and/or other minority victimisation with a false and heartlessly aggrandising rationalisation that ‘all Pakistanis suffer equally’ in the wake of such atrocities.

A farcical notion, as any fair statistician who chances to compare the number of killings suffered by Shias and other minority groupings viz-a-viz the majority, predominantly Sunni populace of the country, would attest. Such statements are vindictive generalisations which attempt to trivialise this issue for a number of obvious, enmity-fuelled reasons.

Shias are liable to be killed, an open declaration by Ramzan Mengal of banned militant out fit the Lashkare Jhangvi. The state of Pakistan is supporting him and media failing to cover #ShiaHazaraGenocide #HazaraLivesMatter #HazaraKilling pic.twitter.com/lHf4SC0BLZ

The shocking and sobering reality. The picture below is that of a #Hazara graveyard in Mariabad. It is said that not a single person in this graveyard has died a natural death.#Quetta pic.twitter.com/ncnmaKm77W

These are just some of the plain facts that no one, especially our policy makers, can afford to deny any longer. The writing on the wall, while it has always been clear on this front, now needs to be announced openly and with courage. But the real cause behind this all too apparent apathy, as exhibited by our state and our people at large, is even more painful to reason with because it has to do with a case of bottled-up hatred for the perceived other.

A contempt that has long been silently and meticulously cultivated, as a result of a host of socio-cultural and historical factors, and which manifests itself in a variety of different forms. Often it comes forth in the shape of Freudian slips in chance social gatherings, where the unjustifiable stance of Shias being a Jewish conspiracy is unconsciously let loose, and sometimes with even a purposeful intent to express what is thought to be a more unadulterated, holier-than-thou strain of Islamic religiosity. Mostly it is through a blatant refusal to condemn their killings as a matter that is isolated and worth addressing.

I do not wish to list all the vile and bigoted slurs (with their roots in extreme misinformation and often just plain old lies) that Shias have to endure on a regular basis in this country, if only to spare the community from the sadistic joy of its detractors who would otherwise get another opportunity to engage in their usual line of mockery and demeaning sprees. Adding fuel to the fire is certainly not the intention here, the purpose is to simply readdress a problem that has now become too much to bear.

It is no secret that Shias are considered to be infidels by a large number of people in this country, and by many in the larger Muslim world. Some fundamentalists even go so far as to denigrate them to a position lower than what is conventionally reserved in both the vocal and non-vocal mainstream for groups who are popularly considered to be ‘confirmed disbelievers,’ such as Christians, Jews, Hindus and Sikhs. Shias and Ahmadis are often deemed to be ‘worse than hypocrites’ and thereby the members of a lesser ilk.

And this sentiment, often endorsed by people who have little to no knowledge about the many nuances of scriptural and other religious history, feeds into this malaise. A mind-set propagated on the behest of sectarian clerics who consider their espoused and rigid exclusionism to be an integral part of their puritan faith and an evangelising necessity. This in turn keeps the destructive ‘us versus them’ binary alive and kicking. A hate-filled heritage, passed onto a newer generation taught to uphold this intra-religious segregation as a matter of uncompromising principle. A heritage left behind by those who will soon be departing from the office of social opinion-making.

As fervent loyalists of the Pakistani nationalistic cause, and important constituents of its historical and cultural fabric, the Shia community now demands answers and an end to this structural intolerance which is repeatedly directed towards them, as well as other minority groups. Such bigotry and prejudice is not a reflection of the Holy Quran, the blessed Sunnah of the Prophet (PBUH), or the humane practices of his loyal companions and beloved kin.

No matter how much a country may progress economically, if it is party to a silent and systematic form of aggression on its streets and neighbourhoods, with the problem largely ignored by the executive authorities whose job it is to alleviate it, it cannot hope to prosper.

This is a simple truism which requires no further qualification to justify it. A truth which cannot be hidden.

For the prime minister, I simply have an appeal endorsed by one Shia too many. Please do something definitive to eliminate this extremism from our midst which festers at the grassroots level in the country, as well as in the upper echelons of power. Our societal peace and attempt at creating an inclusive nation that is accepting of everyone (in accordance with the wishes of the founder of the nation), is on the line here. We need to decide, once and for all, if we want Jinnah’s pluralistic Pakistan, or a Pakistan that fully yields to the whims of an intolerant few.

Please don’t take the convenient route and ignore this issue in the same manner as your openly politicking predecessors. Your legacy is in the making.