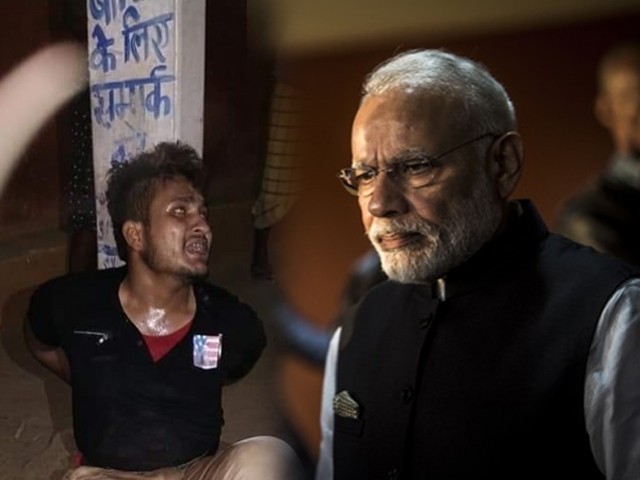 Modi condemned the lynching, stating he was 'pained' by it; however, he refused to blame the state government for any complicity in the matter.

It seems that the United States (US) has ruffled a few Indian feathers by calling out the rise in Hindu extremism in India. On Wednesday, US Secretary of State Mike Pompeo told a distinguished gathering in New Delhi that India should stand for religious freedom. He stated that,

“India is the birthplace of four major world religions. Let’s stand up together in defence of religious freedom for all, let us speak out in favour of those rights, for whenever we do compromise those rights, the world is worse off.”

WATCH | "Let's stand up together in defence of religious freedom for all," says US Secretary of State Mike Pompeo pic.twitter.com/bvNNQ8BVRB

His words echo what the recently released US State Department Report on International Religious Freedom says with regards to the increasing prevalence of extremist Hindu mobs victimising and attacking minorities in India. Commenting on this alarming escalation in vicious religious oppression, the report states,

“Mob attacks by violent extremist Hindu groups against minority communities, especially Muslims, continued throughout the year amid rumours that victims had traded or killed cows for beef.”

An annual report on international religious freedom released by Pompeo on Friday said Hindu-groups had used "violence, intimidation, and harassment" against Muslims and low-caste Dalits in 2017 to force a religion-based national identity. @AFP https://t.co/ybSSGKUNgT

New Delhi, however, reacted very strongly to this report and clapped back by saying that the Indian nation has always strived to uphold the tenants of secularism and is committed to creating a tolerant and inclusive society for all. The Modi government also stated that it saw no reason as to why a foreign government was commenting on India’s domestic affairs.

Pompeo’s exhortation came on the same day when the Indian Prime Minister Narendra Modi spoke in parliament about the need to punish the culprits of the recent incident of a mob lynching a Muslim man to death in the eastern Indian state of Jharkhand. Modi condemned the incident, stating he was ‘pained’ by it; however, he refused to blame the state government for any complicity in the matter.

The lynching in Jharkhand has pained me. It has saddened others too.

But, some people in the Rajya Sabha are calling Jharkhand a hub of lynching. Is this fair? Why are they insulting a state.

None of us have the right to insult the state of Jharkhand: PM @narendramodi

Interestingly, Pompeo becomes the second US politician to give advice to the Indian leadership on the issue of religious freedom. President Barack Obama, during his visit to India in 2015, also stressed the need for the government to uphold these values.

Never before during any Indian regime has the US openly exhorted the South Asian republic to honour its plurality and age-old tradition of multi-culturalism. This begs the question: why now?

It is clear that the Bhartiya Janata Party’s (BJP) apathy towards the targeting and killing of Muslims has now convinced the US that India may be straying from its promised ideals of secularism. Evidently, Pompeo felt the need to reiterate and remind the politicians in New Delhi about the religious persecution which has been taking place right under their noses. Pompeo’s words and the State Department’s report send a signal to the Modi regime that you may choose to ignore and turn a blind eye to these atrocities but the world will not.

The incident in Jharkhand, which resulted in the death of Tabrez Ansari, occurred after he was accused of thievery and a mob continuously beat him up for hours, telling him to chant Hindu slogans such as “jai shri Ram,” a salutation to the Hindu God Ram. This happened in a state where Modi’s BJP is the ruling party. The young man died because the police took him into custody instead of taking him to a hospital.

India: this Muslim man was lynched and brutally beaten by one of Modi's Hindutva fascist mobs.

He later died from his injuries in hospital.https://t.co/iONBIqQVOJ
⁣ pic.twitter.com/YNuN74iK53

This incident has occurred in the very first month of Modi’s second tenure as India’s prime minister. In an address to the newly elected parliamentarians last month, Modi said that his motto as a ruler would be,

“Sabka saath, sabka vikas aur sabka vishwas” (together with all, development for all and trust of all).

Modi said there would be no discrimination in the name of religion and that protecting secularism is no longer an issue since it has already been achieved. This permanent denial of a painful reality proves that these cases of mob attacks on Muslims will not decline, let alone end. The fact that the Modi regime has come out and openly decried the US State Department’s report means that these words are falling on deaf ears.

Protest in India people against Mob Lynching of Muslims in country.

Posted by University of Ahlul'Bayt as on Wednesday, June 26, 2019

During his first term, Modi coined the term “sabka sath, sabka vikas (together with all, development for all)” but history is witness to the fact that Muslims never felt any sense of togetherness with the government. In his second term, Modi has added “sabka vishwas (trust for all)” to his original slogan, but does he really mean that? On one hand he keeps berating secularism and all those who stand for a multi-cultural India, while on the other, he talks about winning the trust of the minorities. This contradiction is at the very core of the problem which is plaguing India.

The issue today is that this narrative has many buyers in India and Modi is its biggest salesman.

Many believe that non-BJP rulers in the past appeased minorities just for votes and that Muslims don’t need to be provided with any kind of special assurance and sense of security. They believe that Muslims have been kept in fear by other parties in an attempt to capture votes.

Such narratives pander to the anti-Muslim prejudices of many Hindus. In an atmosphere where clamping down on minority rights becomes a leitmotif of politics, violence, both physical and emotional, is to be expected. This is characteristic of the politics of majoritarianism that have come to dominate Indian politics.

Modi calls it the “New India”.

The founders of this kind of India are predominantly those people who have built their political career by vehemently opposing minority rights. We all know about Modi’s past and how he has risen from the ashes of the 2002 communal riots that claimed the lives of more than 1,000 people, mostly Muslims. It’s true that no court of the land has implicated Modi in the religious pogrom and it is also true that Modi never worked towards reconciliation between Hindu and Muslims when he was the chief minister of Gujrat. It is also true that out of the 303 parliamentarians that he has now, none of them are Muslims.

Naturally, any political system that has an inbuilt bias against a minority cannot win the trust of that minority.

Real data is:
BJP has 303 MPs in the new Lok Sabha but NOT a single Muslim! https://t.co/xJfvedLzLO

Members of Students Islamic Organisation protest demanding justice for #TabrezAnsari. He was forced to chant 'Jai Shree Ram' and was beaten to death by a mob. pic.twitter.com/S8ZD8D6uIr

There are many in the BJP today who are occupying powerful posts in the country but have risen to power through a usage of divisive politics. The people who have voted for the BJP with full knowledge of the kind of politics it represents will not be agitated by the lynching of a Muslim man or by what the US has to say about it.

A large section of the media which plays second fiddle to the government chooses to ignore such issues, while some even question the credentials of the liberals and seculars who raise a voice for these issues.

Undoubtedly, this is not the old India. This is a “New India,” one with a medieval mind-set and worldview.