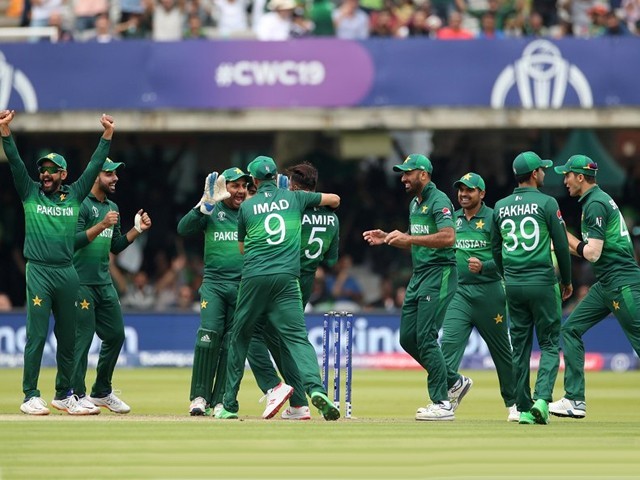 The Men in Green registered a 49-run win at the Lord's against the Proteas. PHOTO: REUTERS

At the iconic Lord’s cricket ground, Pakistan won the toss and smartly chose to bat first. The real test for Pakistan was whether they could see off the new ball against quality bowlers like Kagiso Rabada and Lungi Ngidi. The openers definitely delivered on that front.

Just to put things in perspective, after five overs, Pakistan had scored 35 runs, courtesy of seven boundaries. All the shots played were quality strokes, mostly played against good deliveries. This was crucial because when Pakistan’s opening batsmen deliver and lay a good foundation, it usually leads to the middle order firing as well.

It wasn’t that South Africa bowled poorly, but more so that Pakistan played brilliantly, in particular Imamul Haq. So far in this tournament, Haq has looked shaky early on in his innings, but that was not the case against South Africa.

This victory is for the fans of Pakistan cricket who support the team through thick and thin. We are working hard and trying to improve with every match. Keep backing your country, we all are playing for Pakistan. #PakistanZindabad #WeHaveWeWill pic.twitter.com/sHIeCsixFy

The strokes he played through the off-side were exquisite, piercing the gaps with precision time and time again. At the other end, Fakhar Zaman was his usual self, continually hacking the ball away towards the leg-side. But I feel that Zaman is a much better player than that. While these ‘slogs’ work at times, they are not a consistent option, and isn’t a technique that will allow players to score runs consistently. The manner in which he lost his wicket goes to show that he simply needs to play his natural game and not try to pre-meditate his shots to such an extent. Fakhar Zaman hits the ball to the boundary for four.

In order for Imam, Babar Azam and Zaman to become great batsmen, they must learn this skill. The lack of this ability was visible in the score after the first 10 overs. Pakistan batted brilliantly, but only managed 58 runs after 10 overs. Had they rotated strike a bit better, it could and should have been around 70 runs.

Despite this obvious flaw, the two opening batsmen played well until Zaman was removed, courtesy of a terrible stroke. With him already scoring a boundary against Imran Tahir in the over, there was no need for such a reckless shot. In the games he has played thus far in the World Cup, he has thrown his wicket away.

In came Azam, who initially took some time to get going, but once he did, fans were treated to his customary elegance at the crease. This was most notably on display in the on-drive he played against Ngidi. After 20 overs, Pakistan were 97-1. They could have potentially been in a better position at that time, but I feel that most Pakistani fans were content with the fact that Pakistan had only lost one wicket. Babar Azam is congratulated by Haris Sohail on reaching his half century.

A few deliveries later, Haq was dismissed, thanks to a fantastic caught and bowled by Tahir. While Haq’s innings started promisingly, the limited array of strokes in his arsenal proved to be his undoing. Unfortunately, Haq is far too limited in terms of the shots he can play and constantly slows down after getting off to a good start.

Once his wicket well, I felt that Haris Sohail should have been sent in instead of Mohammad Hafeez. While Hafeez has played decently at number four in previous innings, Sohail was the better option because I feel that Sohail can’t bat lower than number four but Hafeez can. Additionally, it would have kept the right-hand, left-hand combination going.

If you look at the styles of both players, Hafeez has the ability to hit the big strokes, whereas Sohail does not. This is why he should bat as high up the order as possible where he can play his natural game and build an innings.

Ultimately, the Hafeez-Azam partnership ended at a crucial juncture for Pakistan. It was an extremely poor knock by Hafeez, and his untimely dismissal could have ruined Pakistan’s chances in the game. Sohail, however, had other ideas.

The left-hander entered the field and was immediately at ease, striking boundaries effortlessly to all corners of the ground. If there is one Pakistani batsman who can match Azam’s elegance with the bat, it is Sohail. His stint provided the much-needed impetus to Pakistan’s innings. Haris Sohail with his Player of the Match award.

With 10 overs to go and two set batsmen at the crease, 300 looked like a reachable target. However, Azam’s dismissal meant that it was up to Sohail to hit the big shots. Sohail usually struggles at the death, but fortunately, Imad Wasim chipped in with a valuable knock, ensuring that Pakistan crossed the 300 mark. Sohail finished with a sublime 89 runs and he deserved a hundred. His innings, combined with a 50 from Azam, allowed Pakistan to post such a commanding score.

The batsmen did their job, now it was up to the bowlers.

Mohammad Amir started with the new ball and immediately struck gold, getting the prized head of Hashim Amla. The start proved to be catastrophic for South Africa and they could never really recover from that. Once again, Amir was on target and he found great support in Shadab Khan. During the run chase, South Africa were never really in the game. Captain Faf du Plessis battled hard and tried to keep his team’s World Cup hopes alive, but his removal proved to be the final nail in the coffin. Wahab Riaz bowled well at the death, which is a promising sign for Pakistan’s future games. In the end, South Africa only managed to score 259 runs, and this comfortable victory should help boost Pakistan’s abysmal net run-rate. The players are now off to Birmingham to play against the mighty Kiwis in what is a must-win game. Five wins in a row and Pakistan could lift the cup. It is that simple, right?

The team should be applauded for their comeback. The abuse they’ve received over the past week has been awful, and to come back with such a performance speaks highly of their character, all the while silencing critics. It is this very character that I believe will help Pakistan qualify for the semi-finals. I just have a feeling that they will pull it off. However, New Zealand, Afghanistan and Bangladesh will prove to be tricky opponents and Pakistan cannot take any opposition lightly.

With that loss, South Africa are out of #CWC19 semi-final contention.

Pakistan, meanwhile, move up to No.7. Their knockout hopes are very much alive.

For the upcoming game in Birmingham, I would make one change in the batting order. I would have Sohail come in at number four, Sarfraz Ahmed at five and Hafeez at six. Other than that, I would keep the same squad.