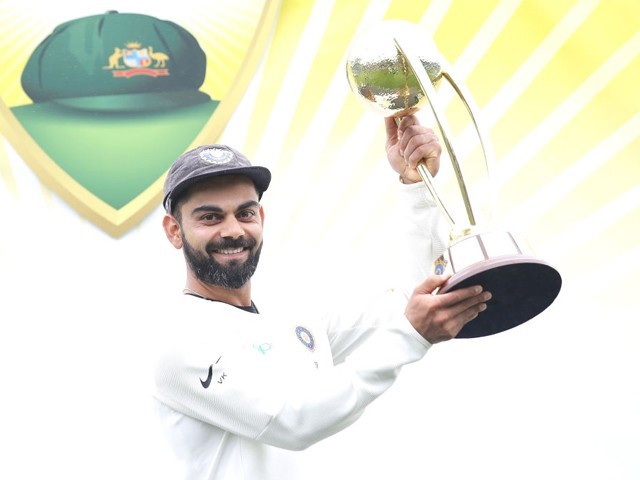 Virat Kohli poses with the BorderGavaskar Trophy as he celebrates India's 2-1 series win after day five of the Fourth Test match in the series between Australia and India at Sydney Cricket Ground on January 07, 2019 in Sydney, Australia. PHOTO: GETTY

Winning a Test series in Australia has been one of the biggest challenges in world cricket. The formidable Aussies usually have a habit of sending visitors bruised and battered from their shores. So complete has been their domination at home that no Asian team had ever won a Test series in Australia till last week, when the Indians finally crossed the final frontier.

The significance of the achievement can be gauged from the fact that several cricketing greats, from Sir Viv Richards to Imran Khan, have praised and congratulated Virat Kohli and the Indian team for this historic win.

Remarkable performance from @imVkohli and team down under. Exceptional batting from @cheteshwar1 as well in such difficult conditions, going on to make history.

And @RaviShastriOfc, keep up the great work with the team. All the best! @BCCI pic.twitter.com/MYmwoaMBHk

Touring Indian teams have traditionally found the combination of Australian aggression and fast, bouncy pitches too hot to handle. While touring Australia for the past 71 years, they have found themselves at the losing end. Though India has won individual Test matches, the team has not been able to prevail in a series altogether. Over the last 10 years, India has been running the Aussies close, but a series victory eluded them until now.

The rise of Indian cricket that started under Sourav Ganguly seems to have firmly taken root under Kohli’s captaincy. The team has abundant talent and backs it up with a willingness to play tough cricket. Significantly, the Indian bowling unit has the ability and confidence to bowl out the opposition twice. The Indian Premier League (IPL) has given young players the opportunity to compete with and learn from the best in the business.

It’s no coincidence that India have been the number one Test side for some time now, and have held on to the ranking through a year of major overseas tours. 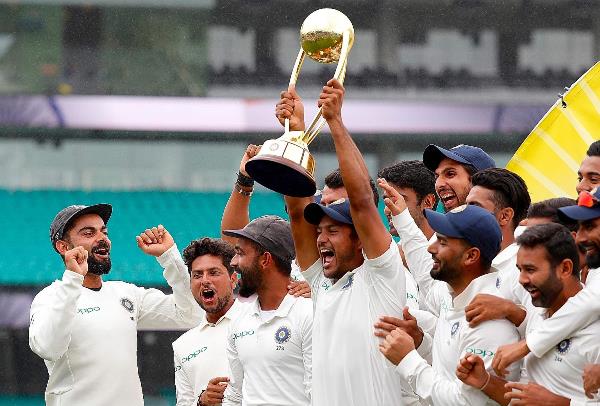 Virat Kohli (L) celebrates with teammates as they pose with the trophy after winning the Test series between India and Australia on January 7, 2019.

In the last year, India had three important overseas tours – England, South Africa and Australia – and for the first time in this writer’s memory, they were expected to win all three. However, India’s batting failed to deliver in England and came to the party too late in South Africa, which is why India lost both tours. Despite these defeats, there were many positives that India could take away. The core of a very strong team appeared to be in place, and it was going to be a matter of time before they asserted themselves.

When India faced Australia at the end of 2018, it was up against a depleted and demoralised opponent. Steve Smith and Dave Warner, two of Australia’s best batsmen, were serving bans for ball tampering, leaving an unsettled and brittle batting line-up. India was thus expected to win this.

However, Australia can never be taken lightly, especially at home. And Australia fought hard, especially in the first two Tests. Ultimately, India’s sustained intensity proved to be too much to handle for the Aussies. In the fourth and final Test, Australia were made to follow on at home for the first time in 30 years, and had it not been for the rain, the final score would have read 3-1 instead of 2-1. 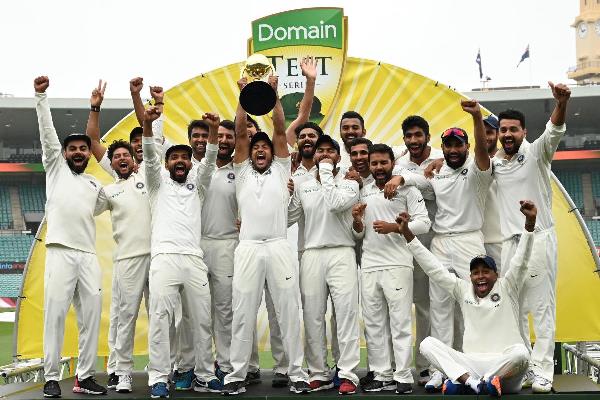 India’s team celebrate their series win on the fifth day of the fourth and final cricket Test against Australia in Sydney on January 7, 2019.

A lot of the credit for India’s comprehensive win should go to Kohli. He has been an intense leader who sets high standards for himself and the team, and is able to lead by example. He is gradually making a place for himself as one of the all-time greats of the sport. Of course, at 30-years-old, he’s just about past the midway mark in his career and still has a long way to go before he takes his place in the pantheon of cricketing legends.

Comparisons are inevitably being made with Sachin Tendulkar, the benchmark for all batsmen. In many respects, Kohli appears to be ahead of Tendulkar, especially his contributions while chasing in ODIs and his average in the fourth innings of Test matches, both of which are a mark of a batsman’s fortitude and the impact he has on the game’s outcome. However, what sets Kohli apart is his ability to win games for India. Even as a captain, his winning percentage is much higher than Tendulkar’s. 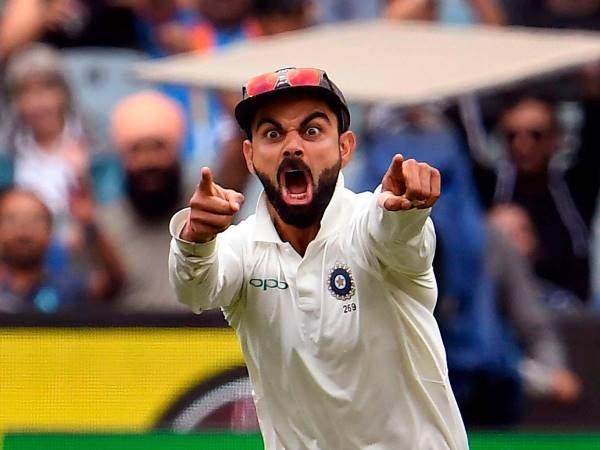 Virat Kohli celebrates the wicket of Australia’s Pat Cummins on the final day of the third cricket Test match between Australia and India in Melbourne on December 30, 2018.

To be fair, Kohli also has the benefit of his burden being shared by others. Not to discount the contributions of Rahul Dravid, Ganguly and VVS Laxman, but for a large part of his career, Tendulkar often waged a lone battle as others perished around him. He also wasn’t backed by an intimidating bowling attack.

Kohli, on the other hand, has arguably the best contemporary pace attack at his disposal to rattle the opposition. In terms of runs, Cheteshwar Pujara’s contribution during the recent Australia tour was larger than Kohli’s. Therefore, Kohli has a stronger team at his disposal, which perhaps reflects in his record vis-à-vis Tendulkar.

Kohli is also a very expressive cricketer. He is animated on the field and is not afraid to engage in banter with the opposing team as he attempts to dominate them. This has led to controversies at times, with Indian actor Naseeruddin Shah recently criticising his behaviour and calling him “arrogant and ill-mannered”. 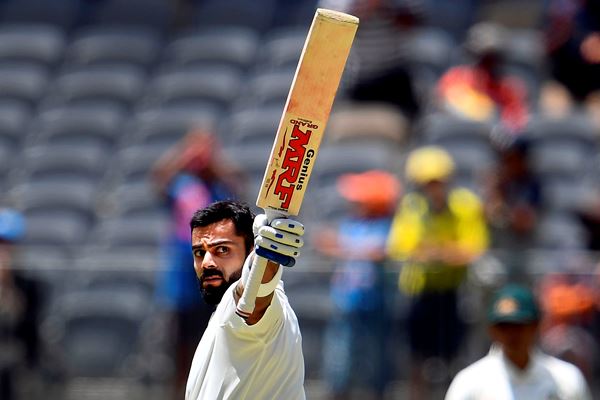 Virat Kohli celebrates after scoring his century against Australia on the third day of the second cricket Test match in Perth on December 16, 2018.

However, these criticisms are unfair. Results matter, and Kohli is not only able to deliver great performances himself, but also brings out the best in his team. Modern cricket is no longer a gentleman’s game; attitude and aggression are integral to it. In an environment where total domination is the objective, self-effacing players and teams often come second best. Of course, aggression has to be backed by ability, and Kohli and his team have both in good measure. When you have self-belief, it shows.

The Australians have been the best exponents of this brand of cricket where no quarter is given. They have been masters at sledging and inflicting mental disintegration on their opponents. The team of the mighty West Indies during the 70s and 80s played with aggression and an attitude that bordered on arrogance. This is in sharp contrast to Indian teams from the same era who were good boys on the field but just couldn’t dominate the opposition. Kohli, however, believes in fighting fire with fire.

It’s an exciting time for Indian cricket. Getting to the top is hard, but staying there is even harder. The entire cricketing world is now gunning for India and it will be interesting to see if Kohli and his team can sustain their stay at the top and replicate the domination of Steve Waugh and Ricky Ponting’s Australia and Clive Lloyd’s West Indies. 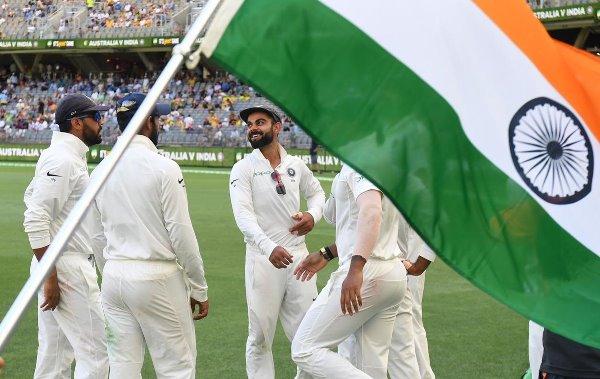 India’s captain Virat Kohli (C) joins teammates after a tea break during day one of the second Test cricket match between Australia and India in Perth on December 14, 2018.