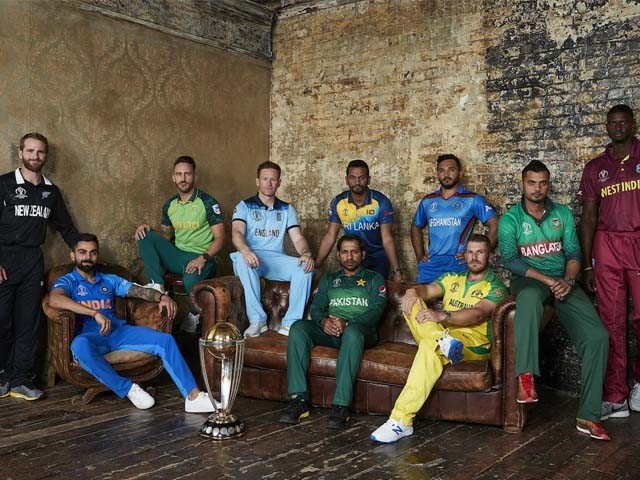 A group shot during the Captains Media Day prior to the ICC Cricket World Cup 2019. PHOTO: GETTY

Based on the teams and the roster of players, it looks like the cricket World Cup is going to be super exciting. The team which has the right combinations and resources to play on different pitches and in varying weather conditions will be the one to lift the trophy. So if it’s seaming and swinging, teams will need pacers that can exploit the conditions to their fullest, and if it’s a dry surface, they’ll have to rely on their spinners to provide the vital breakthroughs.

This year, the format of the World Cup is such that a team may win six or seven games in the group stage, but just one bad day in the semi-finals would knock them out of the tournament.

Every cricket fan is tipping England to be the red hot favourites since they have in-form batsmen such as Joe Root, Jason Roy and Jonny Bairstow in their ranks. While it’s true that they have the most destructive and lethal batting line-up, their batting approach is one-dimensional and could struggle on a dry pitch like it did in the 2017 Champions Trophy semi-final. On the spin-bowling front, Moeen Ali and Adil Rashid are good spinners but certainly not the best in the world.

Looking forward to the 2019 Cricket World Cup starting on May 30. My 3 top teams are England, India & of course Australia. As much as it kills me to say, englandcricket are the favourites, they’ve got a good team &… https://t.co/NwBtgKWMbZ After England, if there is any other team which is guaranteed a spot in the semi-finals, it is India. The three batsmen at the start of their line-up, Shikhar Dhawan, Rohit Sharma and Virat Kohli, form the strongest batting triumvirate in world cricket. India’s bowling attack can also prove to be deadly if the likes of Jasprit Bumrah, Bhuvneshwar Kumar and Kuldeep Yadav get going. Without a doubt, Kohli’s men are one of the strongest contenders for the title.

However, India does have one weakness: their middle order. Against quality fast bowlers in helpful conditions, if you knock out their top three, you’re in business. But having said that, their top three are very consistent, and if one fails then the other two perform, or if both openers fail, the skipper takes charge.

The biggest upset or surprise in the tournament would be either India or England not reaching the semi-final stage. The third spot in the semi-finals should go to the Black Caps. On paper, New Zealand are a formidable side. Their batting line-up is pretty solid with batsmen who anchor the innings, like Kane Williamson and Ross Taylor, alongside big-hitters like Colin Munro, James Neesham and Colin Grandhomme. Add Trent Boult and Tim Southee in swing-friendly conditions and you’ve got quite a formidable team. There is, though, a slight weakness in their spin department. The spin duo of Mitchell Santner and Ish Sodhi will have to complement their pacers if they’re to reach the knockout round.

Perhaps the toughest thing to predict is who will claim the fourth spot. The competition is intense and net run-rate might decide who makes it to the semi-finals. Jimmy Neesham of New Zealand celebrates with his teammates after dismissing Hardik Pandya.

I’d say there will be a three-way fight between Australia, Pakistan and South Africa to fill that last spot in the knockout phase.

South Africa have the needed ingredients in the pace department thanks to the trio of Kagiso Rabada, Dale Steyn and Lungi Ngidi. But their batting is not potent enough to carry them into the final four. A lot will depend on the batting performances of captain Faf du Plessis, wicket-keeper Quinton de Kock and veteran Hashim Amla if South Africa wish to seal that semi-final spot.

On the other hand, Australia are looking dangerous. The inclusion of Steven Smith and David Warner is definitely a big boost to their batting line-up which already has Aaron Finch, Usman Khawaja, Glenn Maxwell and Alex Carey. Australia will, as per usual, undoubtedly prove to be a strong batting force. Australia’s fast-bowling pair of Pat Cummins and Mitchell Starc combined with the off-spinner Nathan Lyon and the leggie Adam Zampa makes it a threatening bowling attack. Given Australia’s track record in the tournament, they are always going to be seen as potential victors, especially since they are the reigning champions. When it comes to Pakistan, it is very hard to predict their chances in the tournament. Realistically, they will find it hard to clear the group stage because they’ll need to win at least five games and then hope their net run-rate is higher than the other teams vying for the fourth position. Maybe a match called off due to rain could help them qualify for the semi-finals, just like it did in the 1992 World Cup.

The strength of the men in green will lie in their bowling, as it always has. Mohammad Amir, Hasan Ali and Shadab Khan will have to be at their very best if they want to threaten some of the finest batsmen in the world. In the batting department, Fakhar Zaman will be the key man and if he provides quick runs at the top, Pakistan will do well.

In the crazy world of Pakistan cricket:

That leaves us with Bangladesh, Afghanistan, West Indies and Sri Lanka. Well, Afghanistan and West Indies are two teams that are very capable of causing big upsets. Afghanistan have a great spin attack in the form of Rashid Khan and Mohammad Nabi, but their batting and fast bowling are quite weak. Still, I believe that they will finish higher than Sri Lanka, who are in complete shambles. The Sri Lankans might at most win one or two games.

However, West Indies, a team that is on the upward swing, have a power-packed assembly line of six-hitters such as Chris Gayle, Evin Lewis and Andre Russell. While their fast bowling line-up is decent, the main problem for them is going to be their spin department. At the same time, Bangladesh will also give teams a tough time. Their quartet of veteran players, Shakib Al Hasan, Mohammad Mahmudullah, Tamim Iqbal and Mushfiqur Rahim, will be the main strength of the team. Bangladesh’s performance will rely greatly on this group of players, especially since their bowling attack is not as effective as those of other top teams.

The World Cup is sure to be a delight for cricket fans around the globe since there is very little which separates most of the teams, and on the day, any relatively weaker team can cause an upset. That’s the beauty of cricket.