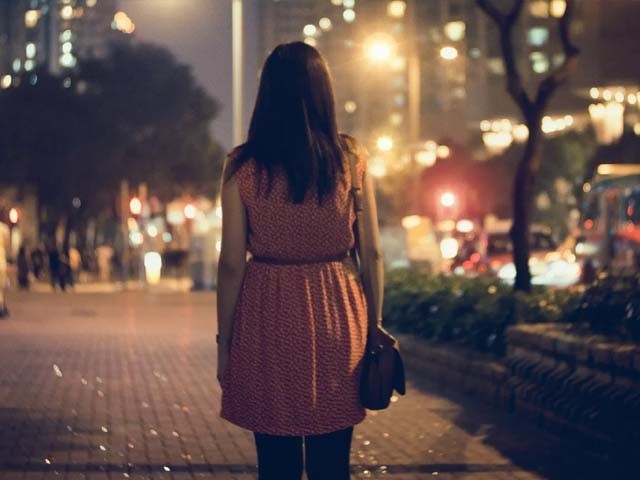 The night was beautiful but it was getting late. She should have been home by now. PHOTO: GETTY

Her heels clicked as she briskly walked on the cemented sidewalk. It grew darker and darker as the sun drowned behind the mountains. The shadows grew taller and the evening got chillier. Her hair flowed back freely as the wind blew through it. She clutched her shawl closely to her chest, accumulating as much warmth as possible as her flimsy chiffon dress was not doing a very good job.

The streets were deserted, no car or pedestrian in sight. It almost seemed like it was midnight rather than twilight. As the last line of light disappeared from the horizon, little stars began to twinkle in the navy sky. They danced around the beautiful moon that seemed to be making its grand entry from behind the mountains. The night was beautiful but it was getting late. She should have been home by now.

She took a turn through a dark alley as a shortcut; little did she know this shortcut would cut her life short. The darkness was overwhelming, the street light seemed to have been broken. A loud bang resounded behind her, startling her. She turned around to find a trashcan fallen on the floor, but there was no one there. Strange, must have been a stray cat. She turned back and continued to walk. But something did not feel quite right, her mind kept thinking about the cause behind the sound. For some strange reason, she refused to believe it was a stray cat that caused the trash can to call.

A revolting feeling arose in her gut; it felt like something or someone was watching her. Her heart raced as she quickened her pace. The feeling grew stronger and stronger. Whatever it was, it was getting closer. Her eyes widened in fear as she began to hear loud, heavy footsteps behind her. She broke into a run, it didn’t matter what way she was going anymore, all that mattered was that she got out of there as soon as possible. It was not long before her feet failed her and she fell flat on her hands.

Tears began to flow down her face. She felt weak and nauseous and unable to get up. Trembling, she turned around to see a dark figure approaching her. Shadows covered his face but she could tell he was grinning. Her heart felt like it would explode out of her chest. She begged him to let her go but he paid no heed to her pleas.  He stood over her like a tower, with his tall masculine figure. She tried to back away but it was of no use, it was a dead end. She wanted to scream but no sound left her mouth.

The last thing she saw was him leaning down to grab her by the hair. After that, it was all dark.

The next day, her abused body was found on a pile of trash.

Poor girl, when will she learn?

Is it ever safe for a deer to wander into the lion’s den? When will she learn?

It’s not safe for women to be out at night, or during the day, or at any time at all. When will she learn?

It is only her fault, she should have taken precautions. Silly girl, didn’t your parents warn you? Now look at what you have caused. When will she learn?

No always means yes. Saying “no” won’t stop this. After all, it is your birth right to get raped. When will she learn?

Human? No, she is an object. She is just a tool for men to satisfy their lust. When will she learn?

She cannot be independent in a man’s world. When will she learn?

She can never be equal to a man, after all, she was created from his rib. It’s not like he came from a woman or anything. When will she learn?

She cannot dress provocatively and expect to be treated differently; it’s like expecting a hungry dog not to go after meat. After all, men have as much self-control as hungry dogs do. She should have covered up. She should have known better.

Poor girl, will she ever learn?