The night we were robbed: Give us your gold or we’ll take your daughter 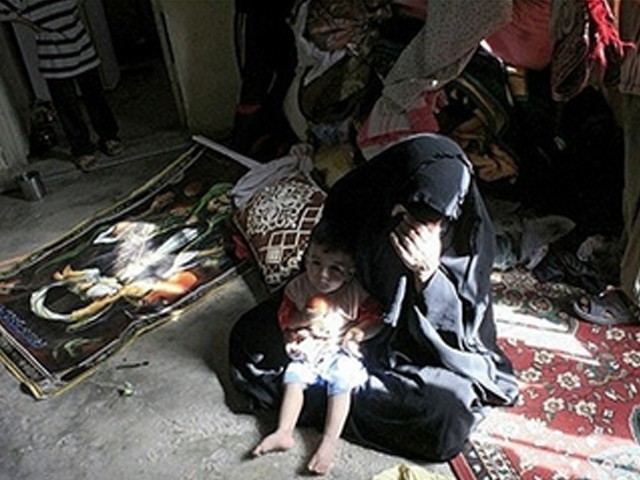 I knew that I would never feel safe again, not even in my own home. I looked around to see that they had ripped everything apart. PHOTO: AFP

The night was dark and gloomy, much like my life has been since the incident. Ever since it happened, I feel like I’m drowning every second, gasping for air as I feel my body becoming heavier. I seem to exist as a mere hollow body bereft of its soul.

It was 4:00 am when the door of my room opened and someone switched on the light and pulled the blanket off me. Through bleary eyes, I saw my father standing by my bed. It was only when he gently told me to get up quietly and not make a sound that I rubbed my eyes and saw the other figures standing around him. There were five men, wearing shalwar kameez with their faces wrapped in cloth. Still in a haze, I thought,

“No, this can’t be happening; not today, not to my family.”

I slowly got up from the bed and they walked me to my siblings’ room, where both my siblings, along with my mother sat together on the bed. I rushed over to them, scared as I’ve never been in my life.

In a deep voice one of the faceless men, threatened my mother,

“You give us the gold or we’ll take this daughter of yours.”

I felt as if someone had drained the very life out of me. I could feel numbness setting in my extremities; I wanted to comfort my mother but my voice was not in my control any more.

The man, sensing my fear, brought his face close to mine and said,

“You tell your mother to give us everything or you know what we are capable of.”

They sat my father down on the floor. He looked as if he had aged 10 years in that one night and I just couldn’t bear to look at his drained, helpless face. My heart broke watching him suffer quietly. Huddled together, we could hear them rummaging through our valuables, breaking things, stealing whatever they could get their hands on.

A man entered the room then, his dark, beady eyes the only thing visible on his masked face. There seemed to be an aura of authority around him and I realised then that he was the leader of the gang. He walked towards my mother with a deliberate gait, bent down and said in a sinister tone,

“We have been patient so far. Give us the gold now and no one will get hurt.”

Even though her eyes belied her fear, my mother replied to him calmly,

“‘We have given you all that we have.”

Her sentence was cut off by a hard slap on her face by the dark-eyed man, who then said in a louder voice,

“The woman won’t give in, take away the daughter.”

Although I could hear what they were saying, I just couldn’t register it, until one of the men took my arm and started dragging me towards the door. I pleaded and cried for them to let me go; and the room suddenly erupted in noise. My siblings were crying in fear, while my parents begged the men to have mercy.

It was at that point that a voice inside me said that they wouldn’t leave without me. I knew that I wouldn’t survive the ordeal and I turned around to my mother and said in a hushed voice,

“Nothing’s going to happen Areej. Allah (SWT) is with us, don’t ever lose faith.”

I then turned towards my siblings who were literally trembling in fear and said,

“Darlings, I know that I don’t tell you often enough how much I love you; if anything happens to me, I just want you to know that I love you both very much.”

Two of the other men then came up behind me and told me to keep my mouth shut and not to make another sound. Just when I thought that the nightmare would never end, the gang leader returned to the room. The mere sight of him was enough to make my blood run cold with fear. He said,

“Don’t make a sound, don’t call any one; and if you inform the police, there will be consequences.”

He then motioned to the others and they all left the room. After 10-15 minutes, we realised that we could hear nothing but silence. There were no voices to be heard, no sound of rushed footsteps; all we could hear were the birds chirping on the windowsill.

It was then that I slowly mustered up the courage to get up and open the door of the room to look outside. An empty hallway awaited me – they were gone, they had actually left. I sank to my knees thanking God for sparing me from a terrible fate and for keeping my family safe.

My family had begun to walk out of the room slowly and we all hugged each other in relief. I sat down quietly in a corner and waited for the happiness to spread in every inch of me but it never did.  It was then that I realised that it never would; that I would never feel safe again, not even in my own home. I looked around me to see that they had ripped everything apart and left behind only remains of our home.

I wouldn’t wish such a day even for my enemy; a day when you are made to feel insecure in your own home. May God save everyone from such a day.

All details are from a real life incident, which occurred on March 16, 2013.

A student of Media Studies at CBM, she enjoys reading, writing and meeting new people. She tweets as @AreejNaqvi (twitter.com/AreejNaqvi)