Even Karan Johar, who calls himself a ‘feminist’, doesn’t understand that ‘no means no’ 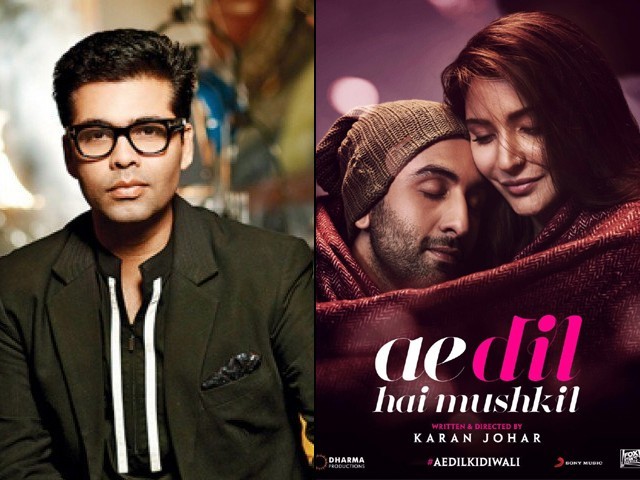 Johar’s reasoning behind his decision to kill Alizeh hints at something far more sinister.

Karan Johar is the king of love triangles; perhaps even ‘love squares’ at times. After all, most of the movies he has directed, including Kuch Kuch Hota Hai and Student of the Year, have the same elements at play and this formula seems to work for Johar. However, it seems too much to expect his movies to also make sense, as very rarely do they possess an actual plot that doesn’t include a Rahul falling in love with an Anjali.

Ae Dil Hai Mushkil, his most recent directorial success, became known for many things but unfortunately, its story wasn’t one of them. Sure, it had memorable songs that you still lie awake listening to (Channa Mereya, anyone?) and you remain mesmerised by how beautiful Anushka Sharma, Aishwarya Rai Bachchan, and especially Fawad Khan looked. But the movie’s plot was pretty mainstream, and quite frankly, disturbing.

Ranbir Kapoor’s Ayan meets Sharma’s Alizeh and eventually falls in love with her. However, Alizeh never reciprocates his feelings and only sees him for the friend that he is to her, refusing his advances throughout the movie until she literally dies. That’s it. That’s the whole movie. The movie exists to act as a shoulder to cry on for men who find themselves in the infamous ‘friend zone’.

The entire film is pretty much Ayan going after Alizeh, pursuing her despite repeatedly being told an explicit no. He sings a song expressing his love to her while attending her wedding as a guest, and tries his luck yet again as she is dealing with her cancer diagnosis. Clearly, the protagonist here doesn’t realise that ‘no means no’, and that being nice to a woman who is your friend does not mean the woman owes you anything in exchange.

Did Johar really expect us to side with a man-child who did not understand what consent is and what platonic relationships entail?

Fast forward a couple of years after the movie’s release, we thought we had erased the horrors from our mind completely, until a recent interview of Johar brought it all back. The director/writer claimed he killed off Alizeh as a form of karma because she did not love Ayan back, who had loved her so much throughout and deserved his romantic feelings to be reciprocated. Johar stated,

“Yes, the last track met with many polarised responses and rightfully so, but I was like she didn’t love him, she has to die. I wrote this character. He loved her so crazily. She could’ve loved him back, why couldn’t she? So she got cancer and she died.”

Karan Johar saying he killed Anushka in Ae Dil Hai Mushkil to punish her is the most unsurprising and fucked up thing I've read today. pic.twitter.com/3EzePlve7v

To be honest, the ending was perhaps the worst part of the disaster that was this movie. It made no sense to kill Alizeh off like that; in fact, an abrupt ending would have made far more sense. You could have put Baby Shark instead of the ending and it would still make a more interesting and satisfying conclusion to whatever the audience spent almost three hours watching.

Taking it a step further, Johar explains how the death was appropriate because according to him, if you are inexpressive, you can develop a tumour. Apparently, your personal dynamics and keeping all your emotions bottled up inside can cause blockages in your heart. Meanwhile, scientists all over the world are burning their degrees as we speak.

The remaining part of the interview that had been shared earlier. #KaranJohar #ADHM #AeDilHaiMushkil pic.twitter.com/jUZIatiDx9

Jokes aside, Johar’s reasoning behind his decision to kill Alizeh hints at something far more sinister. He seems to be under the impression that unrequited love must be punished, and the suggestion that Alizeh deserved to actually die a painful death if she could not love Ayan back is yet another instance of men being encouraged to react negatively if their feelings are not returned with enthusiasm.

I have always disliked #ADHM for the man-child glorification and the toxic emotions it celebrated. @karanjohar just gave us all a new disgusting reason to dismiss the film completely. Feel bad for the people whose efforts will now be viewed with a constant discomfort. https://t.co/wL9jfWG3gc

How dare Alizeh deprive her friend from getting into her pants (even when she is suffering from cancer and is nearing the end of her life) when he was so nice to her and loved her throughout? The disgusting and ignorant mentality displayed here, and that too by a man in Johar’s position – one of the most influential filmmakers of his generation – is disconcerting and reveals a lot about why women find themselves in the state we are in. It would have been better if Johar had simply stated he killed Alizeh off for the drama or the surprise quotient, instead of letting us know that even a fictional woman in a bad movie had to suffer in life and death as a form of punishment for not loving the male protagonist back.

In the real world we all live in, we see regular instances of what men in our society are capable of when they don’t get what they want. Women are beaten, raped, attacked with acid, and even murdered for the simple act of saying ‘no’ to marriage proposals. In the midst of a worsening climate, why would you add fuel to a conflagration? But then again, Johar is already so far up on the ladder of privilege, it does seem unrealistic to expect some thought and nuance from a male director evidently unwilling to recognise the reality women live with.

However, what makes this ironic, and frankly hypocritical, is that Johar has openly declared himself a feminist. He claims to have been raised by women, which is why feminism comes naturally to him, and has also publicly spoken out against item songs and the objectification of women. Yet here he is, writing female characters only to fulfil male desires and then killing them off when those fantasies are not met.

Is his ‘feminism’ just a ‘fad’ for point-scoring?

Is Johar yet another celebrity who tries to be politically correct but does not fully comprehend what feminism and supporting women actually entail? After all, the recent controversy that took place during his show alongside cricketers Hardik Pandya and KL Rahul is proof that Johar’s words are wind while his actions are damning and reveal where his allegiances truly lie.

This is revelatory, and the core of sexual harassment culture. If a woman does not reciprocate i.e. says no to a man pursuing her, in Indo-Pak 1) she must be given cancer and death to punish her (karan johar/bollywood)
2) be stabbed 23 times (khadija case). Add further. https://t.co/OmasbtJSUo

On another note, Johar could have killed off Kapoor in the start so we wouldn’t have to go through the torture of watching him mope around in the ‘friend zone’. Or put Khan on the cinema screen for three straight hours, for literally no one would complain. Also, in what world can we believe that after witnessing the angelic beauty possessed by Ali (Khan), Ayan honestly thought he still had a chance?

What Johar has said may seem harmless, but hints at the sexism and misogyny entrenched in an industry where male writers and directors are responsible for writing female characters that millions then watch and learn from. Not to mention that an adult man taking his own failed romantic history out on a fictional female character as an act of vengeance seems quite petty and alarming when one remembers how successful Johar is in the industry.

In the books of history, Ae Dil Hai Mushkil should definitely be ranked Johar’s worst movie ever, particularly after this added context we have been provided with. However, anyone who has seen the abomination that was Kabhi Alvida Naa Kehna will certainly find it in themselves to disagree.