Can a 12-year-old consent to rape? 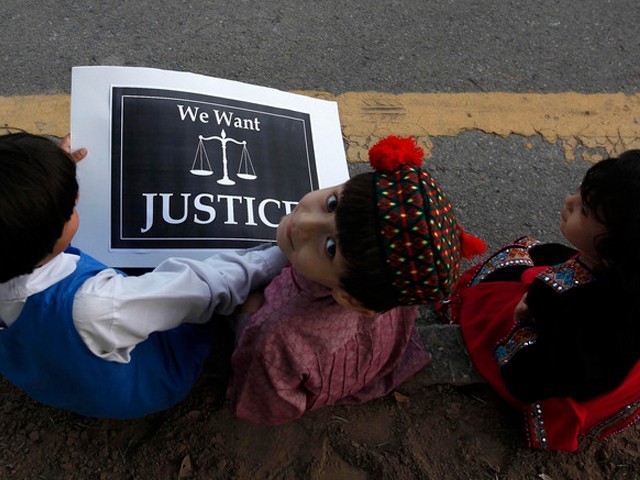 Children sit with a placard on a roadside during a protest by members of a civil society, against the rape of a five-year-old girl in Lahore. PHOTO: REUTERS

A young child, no older than 12, lies unconscious in the hospital. She has been picked up by her family from her employer’s place of residence and taken to the hospital after repeated episodes of the child falling in and out of consciousness. The doctor’s diagnosis?

The child, a 12-year-old girl, has been sexually assaulted.

As I sat with my friend scrolling through my phone reading the news story, I sighed running my hand through my hair. When she asked what the matter was, I showed her the story, letting her read it rather than me telling her. She shook her head and said that there are way too many rape cases happening nowadays on a frequent basis. She was right about that in a way that rape cases are happening too often but the horrible reality is that they have been happening for a very, very, long time.

In a conservative and traditional society like ours, controversial subjects (like rape for instance) are often swept under the rug without a second thought. It is only until recently that more and more cases are being reported and/or finding their way to social media outlets and websites. In other words, the delusion has finally broken and our eyes and ears are finally witnessing the ugly truth that we dread and even more so, fear.

Until five years ago, in around 2012, rape cases were hardly mentioned in the media, neither was it something that people preferred to discuss. The notion was simple and horribly unfair – the victim was guiltier than the perpetrator. But then, in 2012, after the brutal attack on a physiotherapy student, the world was outraged, shocked and bereft at what had happened. Women took to the streets to voice their anger and disgust against the incident and protested for justice for the rape victims. Since then, rape cases have been difficult, if not impossible to ignore.

Growing up in Britain, the notion here is that rape is a crime. It is cruel, callous, unjust and barbaric. Regardless of whether the victim was in a relationship or even married to her perpetrator, sexual intercourse without consent is known as rape. One British Asian girl I spoke to, who wished to remain anonymous, said that she was sexually assaulted when she was a teenager. Coming from an Asian background, she was fearful about what her family or society would say if she disclosed it to them. However, she plucked up the courage to tell her family who became supportive and urged her to go to the police. The police took up her case and eventually tracked down the attacker.

However, on the other side of the world, thousands of miles away, the story is a different one altogether, especially when it comes to rape in Pakistan. A rape victim apparently has to establish a list of four witnesses who have witnessed the act and only then can it be deemed rape. A rape survivor, who cannot do so, is labelled as the ‘criminal’ accused of committing illegal intercourse known as zina.

I was shocked to read a follow up of the same story, which mentioned that the doctor who had said that the child was sexually assaulted went on to suggest that the girl probably ‘consented’ for the act.

Can a 12-year-old actually say yes to the deed mentioned above? Does a 12-year-old even have the knowledge or the awareness of what is or is not happening?

The country’s attitude towards rape and its survivors just goes on to show how patriarchal and male dominant our society is. Men rule the roast here and women have little, if anything, to say or do. It seems shocking and scandalous that the victim is blamed for the act while the perpetrator goes free, ready to unleash his terror on the next person. The very foundations on which society is founded and thrives upon are built, designed and established by men and it is them who control what and what doesn’t happen.

Another girl I came across who spoke on the condition that she remains anonymous, told me about how she was sexually assaulted by her own husband for six months without her realising that it was abuse. She said he was intimidating, terrifying and coerced or pressurised her into having intimate relations. Scared by what he could do should she refuse, this girl without her consent, did what she had to do.

This case just goes to show how much work we have yet to complete. We may well be in the 21st century and tell ourselves that the world is a better place for women but the truth is far from that. We’ve yet to change the society and the way it thinks and there is one way to do that. That way is challenging the society and challenging the way it functions and thinks. There are many things that have been happening for a very long time to come but just because that’s the way it has been happening, doesn’t make it right.

Every human being has the right to live peacefully and happily with respect, pride, honour and dignity and that right is being taken away from some of us women. If we won’t fight for our rights, nobody else will. Just like every generation strives to do something better, one generation strived to discover the cure for tuberculosis and the current generation fights to discover the antidote for cancer. A former generation fought for women’s right to vote while the current generation seeks more equal rights in terms of employment, wages and other such things.

It isn’t easy to fight for your rights or to challenge the society but then again, this isn’t a one man job. Change can only come about when everyone comes together with that burning passion to change something and to improve the existing world. Look at the ocean for instance, a single drop of water is hardly anything, it barely covers a human’s fingertip but millions and billions of drops of water completely change the story. Millions of drops of water can sink a whole ship.

We can try and make the society and this world a better place, a better place for the future generations to come. Let us establish lawful traditions that they may follow and help build and improve upon in their own time. However, it can only happen if we decide to change it now.