Give PTI six months, they said – now we have Rs2.42 trillion added to our debt 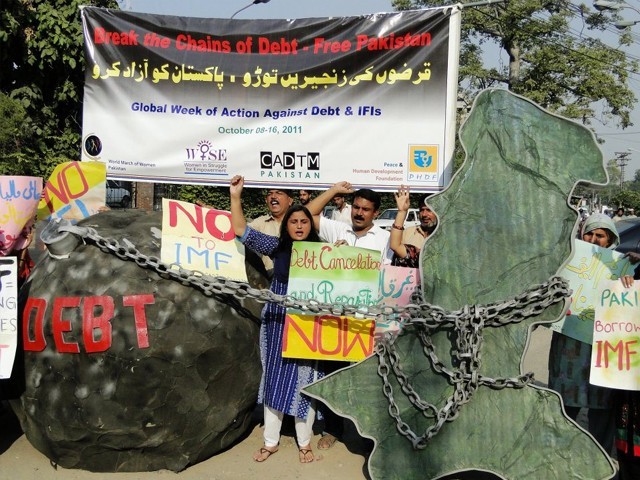 The government has no plan of its own to thwart the current economic crisis and to get out of this debt trap. PHOTO: INSTITUTE FOR SOCIAL AND ECONOMIC JUSTICE

A historic problem in Pakistan, one it has been facing for quite some time now, is the debt trap. Each successive government in Pakistan keeps borrowing for temporary fixes, which only helps in the short-term but has made us worse off in the long-run.

However, even before it was elected to power, the incumbent government consistently maintained it would get Pakistan out of this trap once and for all (but only they knew how). Thus far, not only has the government been entirely unsuccessful in getting us out of this mess and bridging the gap between expenditures and revenue, it has undoubtedly made things worse by adding Rs2.42 trillion to our debt in six months.

In a report published in The Express Tribune, it has been revealed that on average, the government added Rs13.5 billion a day to its debt. Where is this money going? This makes one wonder how the Pakistan Tehreek-e-Insaf (PTI) government will be able to even meet the expenses of the government, as this heavy borrowing has only been spent on expenditures.

We have yet to see any groundbreaking ceremonies for mega infrastructure projects or a new scheme that needed funds. The inability of the federal government in devising a concrete economic plan and adopting financial policies may be termed a major obstacle in its way as it tries to attract investment. And then there are the billions of dollars we have received from the oil rich Gulf States. Where has that amount been spent? No one – not even the parliament – has been taken into confidence regarding this matter, which makes this even more disconcerting. Why are we not witnessing the transparency we were promised?

For the sake of the argument, let’s assume the loans were spent on debt servicing. The question still arises, why has the PTI government still not been able to control expenditures, and why has it broken all records of borrowing in just six months?

The government, which is already spending nearly 69% of the total budget on debt and defence servicing, has been asked by the International Monetary Fund (IMF) to cut down its current expenditures, as they should not exceed revenues. Many economists believe this can only be achieved through cutting either the defence budget or the development budget, but how can the incumbent government cut funds from development when it hasn’t even spent any money on development thus far?

Perhaps the devaluation of the Pakistani currency and the rising interest rates by the State Bank have contributed to the deficit growing larger than predicted, which is why the PTI government is borrowing heavily. However, till when will the government keep borrowing or printing notes, when it has in the past admitted that neither of these are workable solutions? The problem lies with the mindset of the PTI, which is not ready to admit that it is unable to understand the dynamics of the economy, and instead of debating the issue in parliament, it is only wasting everyone’s time by playing the same old blame game.

After all, this borrowing has not been done by the Pakistan Muslim League-Nawaz (PML-N) or the Pakistan Peoples Party (PPP) governments, so cursing any of these parties for the current lacklustre financial policies and the government’s inability to deal with the civil bureaucracy will not help it in getting the right advice at the right time.

One wonders why the PTI wastes time in organising press talks to bash opponents, but not to take investors and the public into confidence by letting every stakeholder know where the money is going and what the exact measures are to change the course of things. It is actually quite alarming that instead of tackling the current account deficit problem and narrowing the gap between expenditures and revenues, PTI is solely focusing on burying things under the carpet, somehow believing it will fix things by not revealing exactly what it is doing.

Until the tax net is increased and non-productive expenditures such as arms deals are curtailed, the government will continue to travel in the vicious circle of the debt trap, and resultantly our economy will always rely on loans and short-term solutions such as printing currency, eventually only increasing inflation and worsening our future.

PTI’s financial wizards, like Asad Umar, and its supremo Imran Khan used to tell the nation they have the formula to fix things in the blink of an eye. Most sane heads did not believe them then either, because it is simply not possible for anyone to wave a magic wand and fix something as broken as the economy or the system of Pakistan. However, in more than six months of governance, the PTI has only managed to wave its magic wand to make things worse for all Pakistanis, without providing even a glimpse of its plan for getting out of this debt trap.

The government, which used to cite internal and external debt as the reason for Pakistan’s economic failures, is now doing the same thing as its predecessors and only trying to copy the policies of former finance minister Ishaq Dar. The PTI government borrowing from the State Bank also puts extra pressure on the central bank as it does not have sufficient reserves to bail the government out, and resultantly will either print currency or borrow money from commercial banks on higher interest rates.

Will Imran and his cabinet tell the nation that this current borrowing on higher interest rates will be repaid through taxpayer money, or will they be inventing a new way of returning the debt that none of us can understand? After all, every time the prime minister or any of his cabinet members are asked about the government’s plan to tackle the current economic turmoil, their response is always the same – it is because of corruption by Nawaz Sharif and others, and we will not let them go, but will ensure they spend the rest of their lives behind bars. One wonders what Nawaz, or for that matter even Asif Ali Zardari, have to do with the trillions in debt added by the PTI government? How on earth will bashing them or claiming to make an example out of them answer the questions we are all rightfully asking about the worrying state of our economy?

Imran and his cabinet need to realise that the clock is ticking, and merely bashing opponents might convince their blind followers that everything is alright, but it will not change the reality that the government has no plan of its own to thwart the current economic crisis and to get out of this debt trap. In fact, it is busy increasing our debt from both, domestic banks and international institutions and states, in a bid to pass the time and hope that the hatred for its opponents will prevail over reality. There is a saying that you can fool some of the people all the time, but you cannot fool all the people all the time. This whopping internal debt of Rs2.42 trillion is evidence that the PTI government is successfully fooling some people, but it won’t be able to say the same for much longer.