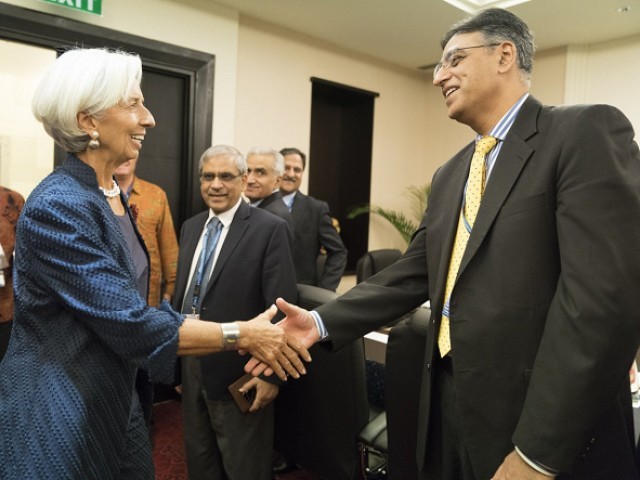 There was perpetual indecision over going to the IMF, only to finally come to the solution the entire nation knew from the beginning. PHOTO: TWITTER/ IMFNews

With the rupee falling against the US dollar, the stock exchange crashing, and foreign currency reserves hitting a new low, it is not out of place to suggest that Imran Khan’s government has been unable to hold a firm grip over the economic crisis. They may have deteriorated the situation further with the hike in electricity and gas tariffs, which has badly affected the middle and lower middle class as the prices of essential commodities is also on the rise.

Then, of course, there was the perpetual indecision over going to the International Monetary Fund (IMF), only to finally come to the solution the entire nation knew from the beginning. The fall of the rupee against the dollar is expected to continue, a necessary step when going to the IMF, which will ultimately further damage our economy. It seems we are now in a vicious circle of debt servicing, and the intemperate expenditure on defence which eats up a major chunk of our revenue will have to be reduced if the Pakistan Tehreek-e-Insaf (PTI) is serious about long-term reform for the economic crisis we are currently in.

The problem with the ‘begging bowl’ is that it is equivalent to dancing around the fire while actively trying not to put it out. All previous governments knocked at the door of the IMF for a bailout package, and now PTI is doing the same. This should have been done sooner, for there is nothing wrong in going to the IMF for help, as long as there is awareness that this can only ever be a short-term solution.

However, the long-term solution is not only about creating jobs in the IT industry or building five million houses and hiring labour and engineers for the time being. Instead of these gimmicks, the government needs to understand that as long as our literacy rate is as low as it is, we cannot depend only on certain sectors to revive the economy in the long run. The textile and agriculture sector will have to be revived, largely in order to empower the marginalised and offer an opportunity to increase our dwindling exports. Pakistan’s rapidly increasing youth is also an asset and should be provided with more opportunities, particular in the tech sector, to make Pakistan look like the face of a young nation. While young people leaving the country for work does increase our gross national product (GNP), we also need to do more for the youth who stay.

The other problem is the unequal distribution of wealth, which increased exponentially during Pervez Musharraf’s regime. In order to prolong his rule, not only did Musharraf introduce tax breaks for the rich, he also heavily depended on the banking and property sectors to bring an artificial boom in the economy. As a result, rich property tycoons, brokers and banking executives got richer, and it is obvious what happened to the poor majority. After Musharraf’s departure, it was the Pakistan Peoples Party (PPP) that came to power, and we all witnessed the crisis it left for the subsequent government in 2013.

When Nawaz Sharif took charge, attempts were made to work on the energy crisis that plagued the entire country. During his tenure, the rupee stood at 105 against the US dollar, the stock market reached a record high, while foreign exchange reserves were at an all-time high at $20 billion. However, with a focus on energy and bringing the China-Pakistan Economic Corridor (CPEC) to Pakistan, Nawaz missed the chance to address structural problems. Neither did he focus on our rising population issue, nor did he attempt to enfranchise the marginalised classes by focusing on small industries and businesses. Nonetheless, whenever an elected leader learns to manage the country, he or she is thrown out of power, and such instability can never lead to a way out of an economic crisis. As long as civilian governments are not given the opportunity to govern the country, we will only move in circles as we take loans to pay off old loans and remain in crushing debt, which is the brilliant economic plan our premier has come up with.

As the economy is under work, we need to simultaneously work on bringing our population under control. Perhaps we need to consider legislation similar to the one-child policy implemented in China to successfully curb population growth. A state with a rapidly growing population with few resources can never grow economically.

Property investment is also not the solution, as it blocks investment and does not offer a large number of jobs; it will only make the rich richer and will have a very little effect on the ‘have-nots’. Even during the looming currency crisis, we saw investors buy dollars long before it soared against the rupee, while stockbrokers sold their shares before the stock exchange crashed. The burden ultimately falls on the common people in the form of price hikes and the resulting inflation.

After coming into power, our prime minister stated he would fix the economy in 100 days. He has now updated the time frame to six months. The way things are going, it will probably extend to the entirety of his five-year tenure. Next thing we know, he’ll ask to be re-elected so he can fix the economy. But no one can magically fix the economy in the years to come, for this endeavour takes time and dedicated effort to prioritise and manage accordingly. The promise to fix this mess in six months is a blatant lie to the nation, as there is no way we can get out of the economic crisis on the basis of these loans alone. If that were the case, we wouldn’t have this current crisis to begin with, as previous governments have also been adept at taking loans.

It doesn’t look good for a new government when, after blaming its predecessors for going to the IMF and for taking loans, it ends up doing the same. Unlike the political stage, the platform of economics cannot be run merely on sloganeering or blaming political competitors. Workable solutions and timely decisions are the need of the hour, as John F Kennedy said,

“The time to repair the roof is when the sun is shining.”

When the sun was shining for Imran, he failed to think up actual, concrete strategies to run the state. Now that it’s been raining for a while, he is trying to fix the roof. Hopefully, it won’t take much longer before Imran finally comes out of his opposition mindset and instead focuses on actual governance to solve the myriad problems that lie ahead.