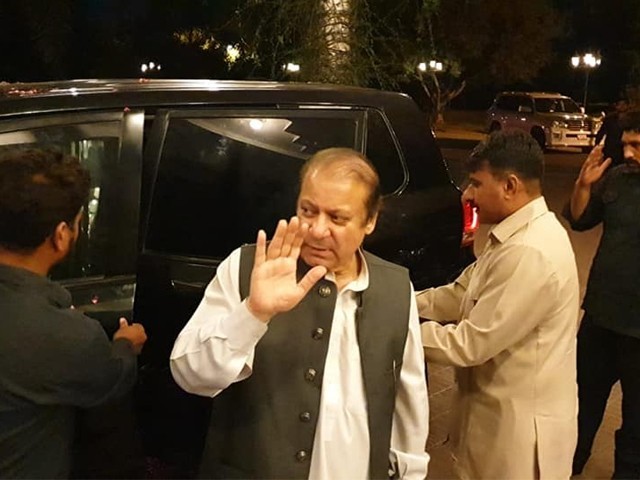 The new attitude is ‘let’s work within the system’; a radical shift from ‘the system is broken’. PHOTO: FACEBOOK/ PML.N.OFFICIAL

For an outside observer, September 19th in Islamabad could easily have been mistaken for Eid – thousands gathered and cheerfully embraced each other with exuberance, and sweets were handed out to all in sight. The entrance of the Islamabad High Court was buzzing with excitement, in the aftermath of the decision to suspend the sentences handed down by the accountability court to Nawaz Sharif, Maryam Nawaz and Captain Muhammad Safdar Awan. Amidst it all, the cause of celebration – former Prime Minister Nawaz – was relatively mute.

Of course, the sombreness is in many ways understandable, Nawaz’s wife and former First Lady Kulsoom Nawaz passed away just weeks ago as he languished in jail. Still, the lack of any sort of ‘rallying of the masses’ is in many ways worrying. It seems that a suspension has been traded for silence.

Since the July 6th verdict handed down by accountability court judge Muhammad Bashir and the July 13th arrests of Maryam and Nawaz, the duo were deemed by many as martyrs of democracy. The sentencing and the ruling was faulty, these people argued, and was the price for Nawaz’s openly combative attitude towards state institutions. ‘Vote ko izzat do’ (give respect to the vote) became the seminal message of the Pakistan Muslim League-Nawaz (PML-N) for the elections, an implicit jab at those they believed were threatening democracy.

In recent weeks, most of the spirited opposition has died down. Shehbaz Sharif, the younger Sharif, has become increasingly quiet about accusations that were bread and butter for PML-N’s rhetoric just months ago. The new attitude is ‘let’s work within the system’; a radical shift from ‘the system is broken’. Many conjecture based on rumours that Shehbaz was directly responsible for negotiating a deal to insure the release of his brother.

In any case, the suspension of Nawaz’s sentence is cause for caution – not celebration. On September 24th, Nawaz was asked to submit himself to the Lahore High Court for potential charges of treason, regarding his statements about the presence of militant groups in Pakistan that were responsible for the Mumbai attacks. Most surprisingly, there has been no uproar from the party brethren, or accusations of targeting their beloved leader. Words like ‘selection’ and khalai makhlook (alien) have disappeared from the party workers’ vernacular. There is only quiet acceptance, for now perhaps.

Of course, there is a chance that Nawaz is simply biding his time and gathering his strength for the next push, there are possible signs of that in reports that he’s extended an olive branch to Pakistan Peoples Party (PPP) and Asif Ali Zardari for the upcoming by-elections. Most hope however, must be vested in the prodigal daughter.

Maryam’s style of firebrand politics galvanised young voters across Pakistan, and she represents a new – yet familiar – face for the party that the next generation of voters can get behind. Perhaps that is the real devil’s bargain; a father sacrifices his chances of a return to greatness for the greatness that could be his heir, the future.

For better or for worse, Maryam will most likely decide the trajectory of opposition politics in Pakistan for the decade to come. Opposition to who exactly? Only time will tell.

This much is certain: for the time being, we must exchange uproar over a fallen martyr for quiet relief. If history tends to repeat itself, this is only a respite for the battles to come.

For a nation surviving on dharnas, Pakistan does not know how, when or what to protest