Imran Khan or Ayub Khan: Is PMRA the new tool to curb freedom of press and control media? 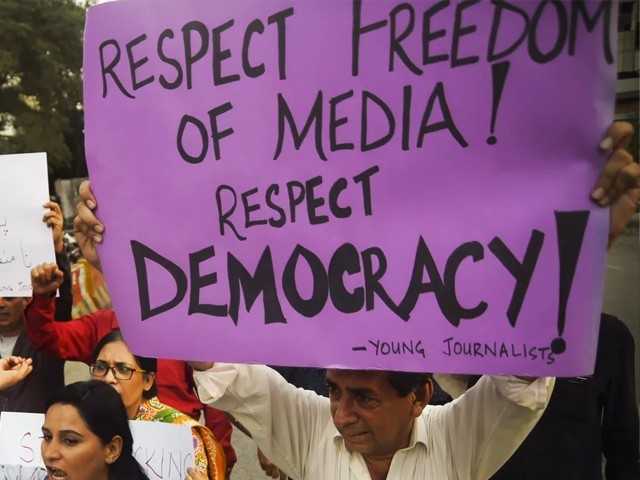 The media in Pakistan has never been free, and it has always paid the price for whatever freedom it enjoys. PHOTO: AFP

Pakistan Tehreek-e-Insaf’s (PTI) government in the centre recently approved the formation of a new regulatory body, known as the Pakistan Media Regulatory Authority (PMRA). From now, all media, including print, electronic and social, will be simultaneously regulated by this newly established body.

Organisations such as the All Pakistan Newspapers Society (APNS), Pakistan Federal Union of Journalists (PFUJ), and the Council of Pakistan Newspaper Editors (CPNE) have already disapproved of the formation of the PMRA and have cautioned against it, terming it an attack on the freedom of press and expression. The PFUJ categorically rejected the PMRA and termed it equivalent to the Press and Publication Ordinance (PPO), the draconian law introduced by Ayub Khan in 1962 to curb the media.

On the other hand, the federal government suggests it wants to end the monopoly of a few influential organisations on the media and wants one body to keep a check on all media so that information (and the truth) cannot be distorted. Thus, the ratings of electronic media will also be calculated by the PMRA.

This move comes at a time when not only journalists but both print and electronic media are facing invisible curbs and financial turmoil. In light of this, the PMRA seems yet another effort to silence digital and social media the way mainstream media is being limited. After all, over the past several months, journalism in Pakistan has faced a severe crisis, with hundreds laid off and many famous journalists either being let go or facing the issue of self-censorship. Under these circumstances, the move to further regulate the media only raises more suspicions about the authoritarian nature of the PTI government.

An unconstitutional and dictatorial move

Bringing all media under one umbrella does not seem like a constitutional move, for not only does the 18th Amendment bring press-related laws under the ambit of the provincial governments, this also reduces the effectiveness of Article 19 of the Constitution, which guarantees freedom of the press. Additionally, nowhere in the world do we see instances of print and digital publications being brought under the same domain that monitors electronic media. In the presence of a code of ethics and self-regulatory laws such as the Press Council Ordinance for print media and the Cybercrime Act for digital media, establishing the PMRA can only be termed an unnecessary new tool created to limit freedom of the press.

This also includes the proposition that licenses will require renewal every year, which means that publications may self-censor or not report against the status quo in fear of their licenses being cancelled. After all, constituting a body to regulate all media without taking the respective stakeholders into the loop clearly indicates we are moving towards the eras of Ziaul Haq and Ayub, when the state had complete control over the press.

A history of media suppression

Pakistan’s media has been facing curbs since the creation of Pakistan. In 1948, two months after the death of Muhammad Ali Jinnah, the Public Safety Ordinance was promulgated which resulted in the closure of dozens of newspapers. Then the PPO was brought in, which allowed Ayub to ban news agencies and arrest dissenting journalists. Zulfikar Ali Bhutto was no different, and his ‘democratic’ government also saw the closure of newspapers and the arrests of journalists.

However, it was Zia’s regime that can be termed the lowest period for Pakistan’s journalists, for not only did Zia enforce a more conservative and far-right mindset, he also brought the Revised Press and Publication Ordinance (RPPO), which included draconian amendments to the PPO. This was used to prosecute publishers for going with a narrative that did not fall in line with his regime. Even in the 90s, when Benazir Bhutto and Nawaz Sharif were in power, laws were used to restrict and exploit the press in order to gain vested political interests.

It was mainly during the era of General Pervez Musharraf in 2002, when the Pakistan Electronic Media Authority (PEMRA) was formed and private TV and radio channels were given licenses, that a form of dissent and press freedom was finally an option in Pakistan. Under this era, both electronic and print media flourished until the government began to work to rein it back in.

The rise of digital media also paved the way for a more pluralistic society and gave the masses another option to raise their voices, which remained unheard on mainstream media. The media in Pakistan has never been free, and it has always paid the price for whatever freedom it enjoys. During all our darkest periods of dictatorships and elected authoritarians, there were always some journalists and papers who fulfilled their obligations and presented the facts, and also suffered the consequences of doing so.

Now that we are once again witnessing state control over mass media, it is easy to see why most people are concerned, given our controversial past. After all, it is an old trick to try and control the media by hurting it financially and then gradually adding shackles in the name of regulation, national interest, ethical journalism and so on.

Questions for the PTI government

The question has to be asked: why did the PTI government not show any hate for the media while it was in the opposition? Why did it then not complain about ethical or factual journalism? Why did it not propose any legislation in the Khyber Pakhtunkhwa (K-P) assembly – where it was in power – to abolish the advertisement rates for print and electronic media in order to save the national exchequer money? Most importantly, why is the PTI trying to restrict the media now, when the same media is partially behind its gradual rise to power?

Perhaps the government and other institutions need to understand the simple fact that it is not possible to restrict information in today’s age, and doing so only leads to more dissent, as witnessed during the Arab Spring.

Had the PTI wanted to regulate the media for the sake of better journalism, then it would have consulted the respective stakeholders first. Since it has not done so, this move to fully control the media through the PMRA will not serve its intended purpose and will only be remembered as yet another unsuccessful move to snatch the freedom of expression guaranteed to us by our Constitution.

The PTI government, which is currently hiding behind the shield of national interest, saving money and highlighting the negativity of the press, needs to be reminded of the saying by Robert Ebert:

“When, in a free society, the press is criticised for negativity, that almost always simply means it has dared to question the policies of the party in power.”