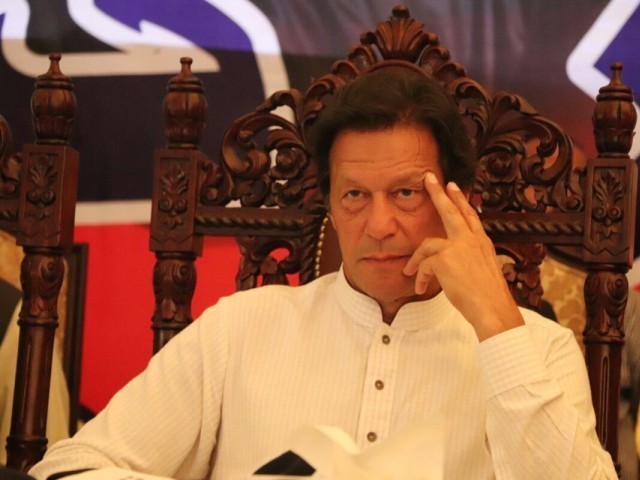 How can anyone believe in PTI after watching them turn into the same people they criticised previously? PHOTO: PTI OFFICIAL

It has been only seven weeks since the Pakistan Tehreek-e-Insaf (PTI) government took over the reins of the country and it is already evident that the government, especially its finance minister, has no clue of the direction the economy is taking. It is, of course, the fault of the PTI leadership, who brainwashed its followers into believing that Imran Khan could change the face of Pakistan by eliminating corruption and recovering the looted money immediately after winning the elections.

Perhaps the slogans were deliberate; Imran and his associates knew that it was impossible to achieve so much in such a short span of time. Or perhaps they really believed it themselves. As the Nazi leader Joseph Goebbels used to say,

“If you repeat a lie often enough, people will believe it, and you will even come to believe it yourself.”

“The bigger the lie, the more it will be believed.”

PTI voters were convinced that all our taxes are siphoned out of the country and deposited in foreign bank accounts or used to buy property in Dubai. They were told that just by arresting a few civil servants and tax-evaders, the change PTI promised would happen overnight.

The 16.8 million people who voted for PTI actually expected miracles within a very short time of their party coming into power. As even a layman knows, miracles do not happen overnight. Yet his charisma is so great that Imran was able to persuade his simple followers that he was the chosen one, the man who would be able to make their dreams come true. Some PTI voters even believed that the dollar would soon be available for Rs40, and asked everyone they knew to sell all the dollars they had. As the sycophantic Senator Faisal Jawed said,

Apparently he forgot that Pakistan existed long before Imran was even born.

Alas, the miracle has not occurred, and there is no evidence that it will occur in the near future. The dollar has appreciated against the rupee (and is expected to be worth around Rs140 in the next two or three months). The stock exchange index continues to fall, and the economy itself appears to be in free-fall. The State Bank has raised the interest rate by 1%, and a further hike is expected, which will result in massive inflation. Growth rate is expected to slow down to 4.8%, if not lower.

Despite Imran proclaiming loudly that he will not go begging to the International Monetary Fund (IMF), his finance minister is doing just that. So, really, there is no difference between this government and the ones that came before. Gas prices have been raised and with electricity bills sure to increase, we are all in for a nightmare.

How does one expect PTI to fulfill its promises regarding the country’s economy when they are going back on everything their party stood for? How can anyone believe in them after watching them turn into the same people they were criticising previously? In the first few weeks of being in power, PTI’s priorities have been such that you wonder if they even know what really matters in the country. Firstly, there was the question of where the prime minister would live. He had said that he would not live in the PM house and that it would be converted into a university. So he decided to live in the quarters of the military secretary (which incidentally is part of the PM house colony). He may be fooling the people who voted for him, but he is not fooling the rest of the country.

Then there was the matter of protocol, which Imran highly detested. But the protocol continues to be in force, whether it is for him, for the president or his ministers. He also went back on his promise to not go abroad in the first three months of coming into power. He said he would travel on commercial flights and not travel in business class. But in the very first month of assuming office, he travelled to Saudi Arabia in an official Air Force plane and also took along plenty of ministers and others with him, a practice he used to criticise when he was in opposition.

They also had a justification for their helicopter travel adventures. Fawad Chaudhry’s claim that a helicopter requires only Rs55 to take the prime minister from his home in Bani Gala to the prime minister’s house, only proves that the intelligence of everyone associated with PTI can be questioned. I even suspect that when they say ‘billion’, they really mean ‘crore’ (10 million).

Furthermore, PTI and its leader always claimed they are against dynastic rule, but unfortunately they accept anything when it comes to their party. Close friends of the prime minister have been named ministers and advisors, which makes us wonder, where is the merit now? Some of these include Naeemul Haq, Aleem Khan (under investigation by NAB), Awn Chaudhry and Zulfi Bukhari (despite being a British national, as well as under investigation for being in the Panama Leaks scandal and owning offshore properties).

Recently, Umar removed the ban on non-filers to buy vehicles and property, which shocked the country. Then he re-imposed the ban, only allowing overseas non-filer Pakistanis to buy property. But with the current volatile situation in the country and with the government backtracking on every measure it announces, how can overseas Pakistanis trust Imran, especially after his treatment of Atif Mian, a respected figure in international circles?

In the end, after all this mayhem and the inability of PTI to fulfil its promises, Chaudhry blames the previous government for PTI’s failures. This may help in the short term, but sooner or later, those who voted for the ruling party will be disillusioned and they will wonder whether the previous government was in fact better, or if following this whole ‘choosing the lesser evil’ mantra was a good idea. So unless this government takes drastic steps to improve the situation, people may come out on the streets protesting against false promises and impending price hikes.

The government needs to change its ways but while it fixes its problems, the country needs to be put first. Our economy is in shambles, we cannot afford to make mistakes anymore. The filing of returns should be made mandatory and there should be strict punishment for non-filers and tax thieves. Smuggling is a curse that has drowned this country in poverty. Just raiding the shops in Karkhano Bazaar in Peshawar, and all those markets in Karachi and other cities selling smuggled items will earn billions for the government. Taking the electricity and gas thieves to court and penalising them heavily, besides putting them in jail, will put the fear of God in others and will be another huge source of revenue.

The biggest revenue-earner will be the property sector, which has Rs7 trillion of black money invested in it. Some property price manipulators will have to be arrested and tried, but it will be worth it, even if a few of them are PTI donors.

But does this government have the will to do all of this?

It will continue floundering like a sinking ship until the inevitable happens (as has happened so many times in the past), and a new government takes over.