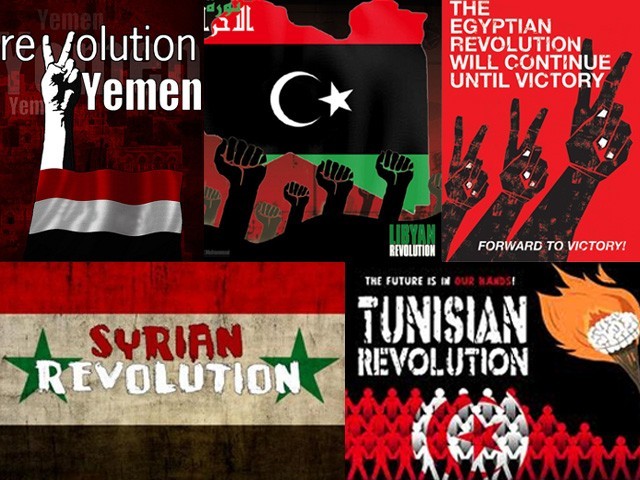 Although the Arab Spring has resulted in a forceful overthrow of various regimes, I wonder if the aim of a new system has actually been achieved.

I was once asked by my professor to give a few examples of modern day revolutions. Without pondering for a fraction of a second, I quoted the famous Arab Spring which included a change of regimes in Tunisia, Egypt, Yemen and Libya along with a bloody civil war which is still in progress in Syria.

The Arab Spring was an inspiration to many including myself both, in and outside the Middle East. So inspired was I that I even wrote a blog a couple of years ago praising the revolution and change in Egypt which resulted from the Arab Spring.

However, it was not until I enriched my understanding of revolutions that I had to reconsider my stance and question other recent revolution-cum-movements such as the one in Ukraine.

In its literal sense, the word ‘revolution’ means a forcible overthrow of a government or social order in favour of a ‘new system’.

Although the Arab Spring has indeed resulted in a forceful overthrow of various regimes, I wonder if the aim of a new system has actually been achieved.

Tunisia was the beginning of the Arab Spring where a fruit vendor, Mohamed  Bouazizi, immolated himself to death on December 17, 2010 to protest against the humiliation he faced after being slapped by a police officer. His self-immolation fuelled the fire of change and spread to all parts of the country, eventually forcing President Bin Ali to quit.

Many saw this as the cornerstone for bigger things to come. But did Tunisia achieve change?

Even though the Ennahda (Renaissance) Movement assumed power through a smooth transition without disturbing the secular constitution, it has widely been criticised for promoting Wahabbism in the country. Its workers have frequently attacked and rioted bars and shops for selling alcohol.

Yes, Tunisia did change but was it for the better?

Egypt followed suit. Tahrir Square roared with chants of change calling for the resignation of former President Hosni Mubarak. Mubarak, with the military on his side initially resisted but eventually had to succumb to public demand. This paved the way for the famous elections that saw the Islamic-inclined Muslim Brotherhood rise to power. The Egyptian people had to choose between military rule and the Muslim Brotherhood and thus, for the sake of democracy, chose the latter.

In some ways, the happenings in Egypt resemble those in Pakistan to some extent. The all-powerful army allowed democracy to flourish for a short interval, watching events unfold while President Mohamed Morsi made unpopular legislations and decisions one after another. Such was the public image created for the Brotherhood and Morsi that the same Tahrir crowd that had struggled and chanted for democracy, gathered again to call the army to intervene and overthrow a democratically elected government.

And as I write, General Sisi, is preparing to become the next president of Egypt.

So, is this a revolution or a change of sorts?

Libya could somewhat be called a casualty of collateral damage. The ‘pro-democracy’ rebels, magnified by the media and supported by foreign forces and al Qaeda-affiliated militias were successful in quickly murdering and disposing of the four-decade long ruling Gaddafi, along with ‘liberating Tripoli’.

However, Libya is now considered a stronghold of various Islamist militias willing to kill scores to gain authority and influence. The same militias didn’t even spare a US diplomat, forgetting the fact that the US was one of the main backers of the rebel movement.

I find it hard to even call it a movement.

Syria’s ethnic conflict where the Shia Alawite ruling elite is fighting for survival against the Sunni majority, was also blanketed under the euphoria of the Arab Spring. But what started as a movement for equal rights and liberties has now turned into a militancy-infested civil war between the Assad army and the al Qaeda backed groups.

Other less prominent examples of such movements include Yemen and Bahrain.

Although former Yemeni President, Ali Abdullah Saleh, vacated his seat in response to public pressure, his deputy and the then Vice President, Mansur Hadi, is acting as the president since 2012, virtually continuing all his policies. Yemen has also become one of the strongholds of al Qaeda.

On the other hand, there is an ethnic conflict in Bahrain as well which is far from what a revolution should result in.

With different dynamics in all these conflicts and movements, it was unfair to use a similar term for all and thus, tag them as revolutions.

To a great extent, the media holds responsibility for diluting the concept of a revolution and labelling even minor skirmishes as revolutions in recent times. Additionally, academicians and regional experts also used these terms for their convenience and thus, promoted a flawed concept.

To make matters worse, this new wave of ‘revolution’ has set the wrong precedence. Whenever there is a violent protest or movement against a ‘less than popular’ leader, the media loses no time in tagging it as a ‘popular mass movement’ or a ‘revolution for democracy’.

And the world powers wait anxiously on the side lines for their entry (and often exploitation) into the consequent chaos.