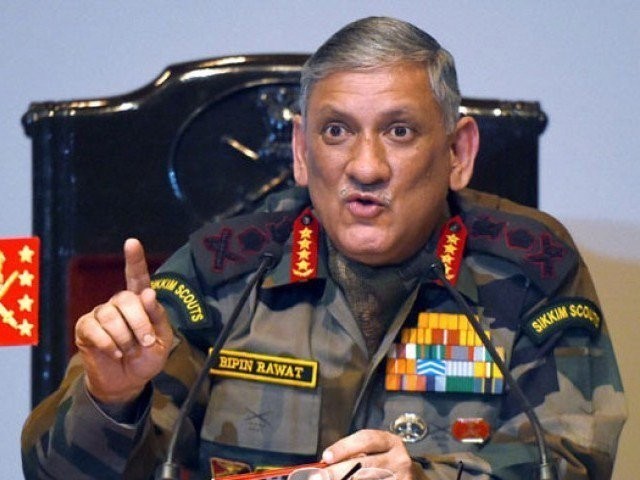 The Indian army chief has found it prudent to lecture another country on how its state ought to function. PHOTO: PRESS TRUST OF INDIA/FILE

In what is almost certainly a first, the Indian army chief has found it prudent to lecture another country on how its state ought to function. While this may be a first, it sadly doesn’t come as a surprise. Institutions in India in the time of Narendra Modi are in disarray. Those that should assert themselves are being asserted upon – like the Election Commission of India, the Reserve Bank of India, the Central Bureau of Investigation and so on – while those institutions that should properly mind their own business feel like they now have the space to lecture other countries, like the army.

The Indian army has, for all these decades of freedom, been an exemplary institution when it comes to understanding its place in the larger scheme of things, with India’s first Prime Minister Jawaharlal Nehru playing a pivotal role in cementing that understanding. This makes the recent statements of the pontificating army chief all the more unfortunate. Let’s hope the Indian army’s history has conditioned it enough to inure it from the right wing’s adulation and its own assertive impulses.

Pakistanis – even secular ones – reacted to the statement with understandable scorn. Indians certainly wouldn’t take kindly to the Pakistani Army Chief lecturing them on state arrangement, even if Pakistan’s Army has always been assertive. What is also ironic now of course is that this statement comes from the army chief at a time when the Hindutva has emasculated India’s secularism and continues to pose existential questions to its survival.

Rather than dwell on the general’s statement, we may as well take this opportunity to explore why and how this irony came about. The hope was that the Hindutva was immersed into the Ganga with Mahatma Gandhi’s ashes. How then did it manage to lurk, bide its time and rise again, phoenix-like, through the drama of demolition? We can only speculate, but speculate we must and hopefully the debates that emerge may bring some clarity and consensus.

Secularism in India was born with the Indian onstitution even though at the time a form of it was implied rather than explicitly stated. India’s founding fathers considered the addition of the word itself but BR Ambedkar felt it would be superfluous, given that the constitution already accorded equal rights to all citizens and that discrimination on the basis of faith was prohibited by law. But this was not all. The greater worry with regards to the word was its meaning and application in the western sense – separation of church and state.

Why was this a worry? The worry was that while the state must be prevented from imposing religious mores on its citizens, these mores often impose inequitable socio-economic structures on people, and a constitution committed to heralding a transformation – as in India – could not commit itself to a strict separation of church and state. This could enfeeble the Indian state in its attempt to prevent caste-based discrimination at places of worship, at workplaces, and in life.

So while the word ‘secular’ was initially eschewed, both Nehru and Ambedkar wanted to see India transform into a secular society. For this reason, they supported the Uniform Civil Code (UCC), a debate that remains highly controversial in India to this day. What does the UCC have to do with secularism then? Secularism is a form of arranging the relationship of the state with its citizens. For better or worse, it works as a system depending on the nature of that society itself. We wear many layers of identity as individuals, and in a secular society the political identity of an overwhelming number of citizens is not their communal identity but rather their individual identity as citizens.

When a secular state governs a secular society, there is harmony between the two interacting components. However, when a secular state attempts to govern a communal society, there is dissonance, which manifests itself in the attempted communal capture of secular state institutions through laws like the beef ban, undermining secularism itself. According to Pratap Bhanu Mehta, individual liberty needs to be the cornerstone against majoritarian impulses, and the primary defence for secularism. But the cherishing of individual liberty needs to be predicated by strengthening individual citizen-based identity.

This is where the UCC comes in. It is that first critical step necessary to move towards a secular society, as it strengthens individual-based citizenship identities and weakens communal identities in people’s interactions with the state. However, although Nehru and Ambedkar saw it as important for India, they did not implement it then, as passions were high following Partition and they did not want to give shaken minorities in India the impression their freedoms were being curtailed. They therefore left it for future generations of Indians to aspire to and made the UCC a part of the Directive Principles of State Policy (DPSP), a roadmap of non-justiciable goals for the Indian state to work towards.

Meanwhile, as the UCC took a backseat, secularism made a comeback through the 42nd Amendment in 1975 by Indira Gandhi, when she added the word to the preamble of the constitution. In time, secularism not only became a bulwark against majoritarianism, but incredibly, secularism became a part of the basic structure of the Indian constitution. Suddenly, from not being used overtly by the founding fathers, secularism was not just staring everyone in the face in the preamble, it was also put beyond the reach of any transient parliamentary majority; a foundational stone of the Indian Republic.

And yet for all that, the dissonance persisted. India was now a country in which an overtly secular state was governing an inherently communal people; people whose religious identity continued to be their political identity. That first step in moving towards a secular society in the form of a UCC was never taken. Despite this, a secular polity may still have taken root had India been fortunate with principled leadership, but that was not to be. Perhaps it could not have been, for the politics of a country is a reflection of its society.

Appeals to religion in order to win votes were a constant feature of Indian politics during the 80s, but this process intensified with Rajiv Gandhi, as he tried to appeal to the conservative sections of both major faiths of India. As the process intensified in the backdrop of Rajiv upturning the Shah Bano judgement, it was almost as though a hole was pierced through the veil and Hindutva finally found the space to grow through the drama of the demolition of the Babri Masjid. It was no coincidence that it grew when it did. When a sense of ownership in the political dispensation is contested on the basis of religious identity, that ownership is reasserted on that very basis.

Today, the Bharatiya Janata Party (BJP) may talk about the UCC, but that is all it is – talk. Talking about it is in the interests of the BJP because it keeps alive that contested sense of ownership on the basis of religion through the opposition to the UCC. Consequently, support for the UCC is today seen as an issue of the right-wing, but actually implementing a progressive UCC would be against their long-term interests. A party that draws its support from the politicisation of religious identity would be the first to suffer from the emergence of a secular society that would be in sync with a secular state.

Nehru’s party, on the other hand, has entirely abandoned the cause championed by Nehru and Ambedkar, as they do not find even talking about it to be politically prudent. Nevertheless, it is important for India to find its own expression of secularism, one that is a bulwark against majoritarian tendencies, and yet one that allows the constitution to play its transformative role.

At this juncture, therefore, if the Indian army chief really had to express his views about secularism, instead of providing gratuitous advice to Pakistan, he should have asked,