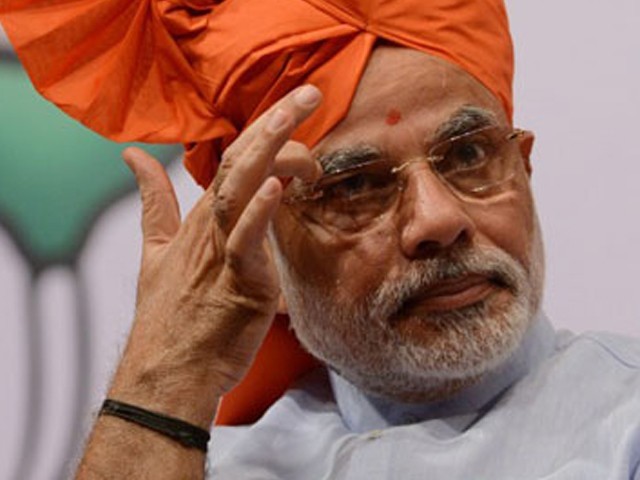 Mr. Modi, do you think that by creating divisions in society and by promoting Hindu extremism you are making Indians proud? PHOTO: AFP

Many said that Modi should not be judged without being given a chance and that proof of the pudding is in the eating. Indians have slowly begun to realise that the pudding they picked up a year and half ago is proving to be of a terribly low quality. It tastes bitter. A year and a half into power, Prime Minister Narendra Modi has become a great embarrassment to the many Indians who voted for him.

He possesses a historic mandate in his hands; the BJP, along with its allies, hold more than 300 seats in the Indian parliament. Modi has made a mockery of the widespread support that he had garnered in 2014. The promises he made have fallen flat and expectations have been shattered.

Modi rode to victory on the back of a promise; inclusive policies for all the various communities in India. One of the inclusive slogans that he coined was,

(Together with all, development for all).

That promise, which formed the backbone of his election campaign, seems to have evaporated without a trace. Almost as if he had never promised that his administration would push for solidarity and heal the various communal discords that have plagued the country since its very inception.

It has now become apparent that his election rhetoric was nothing but a ruse to secure office. He sweet-talked his way into becoming prime minister, and let’s face it, the public was seduced.

I cannot help but harken back to the days before Modi’s administration sunk its teeth into the Indian flesh. The sceptics who had little faith in Modi, used to buzz around his election campaign, looking for tiny morsels of truth that would indicate Modi’s real agenda. When Modi loudly proclaimed that, “Ache din aanay walay hain”, a huge section of the population fawned over him and swayed under his spell. The sceptics, however, raised their eyebrows in alarm. They accused him of having an inherently divisive agenda. They tapped their pens on the temples of their foreheads in the depths of dingy media offices, chewed on their nails as they drove to work through the myriad of election posters, lost themselves in pots of aloo curry as they rotated the ladle clockwise, and counter clockwise, and wondered,

“Could Modi, the watchman of the Gujarat horror, really soothe the aches of India’s communal divide?”

Their pens ran out of ink, their nails were reduced to stubs and the burnt aloo curry never made it to the dinner table. The dark premonitions of the sceptics have now become reality.

The beef ban and the sordid rise in cases of Hindu extremism in different parts of the country are a clear depiction of the Bharatiya Janata Party’s (BJP) divisive agenda. The first to throw a matchstick into India’s ripe communal conflicts was the Maharashtra government when it banned the consumption of beef and destroyed the meat industry. Thousands lost their jobs, and Muslim and Hindi beef eaters felt alienated and persecuted. The Rajasthan and Chhattisgarh governments jumped on the bandwagon and banned meat eating during the Jain festival. All state governments that have issued the bans are run by the BJP and all of them have sizable minority populations.

Put down your pens, park your cars, turn the stove off and think for a second.

How is this meat ban going to translate into the larger conversation on Hindu extremism and the persecution of Indian minorities? What will they ban tomorrow? Who will be side-lined next as the “other” in this tirade? By banning meat in the name of Jain or Hindu festivals, the government is trying to appease one section at the cost of another. The communal wounds that were supposed to heal are becoming putrid with new infections.

The BJP and its associate the Rashtriya Swayamsevak Sangh (RSS) are old masters in this game.

Their strategy was apparent from the very first day. The ridiculous love jihad, the ‘ghar wapsi’ campaign of reconverting Muslims to Hinduism, the dilution of cases against Hindu militants involved in terror acts, religious violence in different parts of the country, rewriting of history, communalisation of education, the ban on beef and now the ban on meat altogether– it’s not too hard to see what the Modi administration is leading the Indian people to; a world that is washed with saffron and nothing else.

Instead of focusing on making achievements in the economic front and delivering the promise of ‘Shining India’, the Modi administration has been pooling all of its efforts into creating a harsh domestic climate. Besides the meat industry, the Indian media has also endured crushing restrictions. It is no secret that the BJP regime manipulates TV channels and other media in Delhi. The government interferes directly with the content of the news through its corporate handlers. Clear instructions have been given to some channels and news magazines which dictate that unfavourable comments regarding the top BJP leadership would not be tolerated.

Hindu extremism has reached a point where defiance can prove to be fatal. The recent killing of a famous literary person, MM Kalburgi from Karnataka, by Hindu extremists is a case in point. Threats are being handed out the same way secular bloggers receive in Bangladesh.

The anger and frustration amongst the cross-sections of society is palpable. People are speaking up against Modi’s injustices. Sonakshi Sinha, a popular actress and the daughter of a Bollywood veteran, Shatrughan Sinha, referred to India as “Ban-istan” in reaction to the Maharashtra government’s controversial decision.

This is a free country! Welcome to BAN-istan… I meant india.. Stupid autocorrect.

Our country is going to remain a 3rd world nation because of the intolerant misogynistic close minded few. https://t.co/JcIDEC3gQE

These statements reflect the pain of forward thinking citizens who are feeling increasingly uncomfortable with the government which seems to be hell bent on taking the country back to medieval times.

The reaction of the Hindu right-wing trolls on the film stars’ outbursts show the mentality of the crowd which forms the backbone of the regime. Sonakshi Sinha had to endure fat-shaming and Sonam Kapoor was harassed on Twitter for her views.

The secular spirit of India is under attack. People are choking on the saffron that is being shoved into their faces.

Mr Modi, do you honestly think that your policies are an asset to ‘Shining India’? You are dragging this country, kicking and screaming, back to the middle ages.

We won’t go without a fight.

India had expected Modi to be an agent of change, a new hope for the nation. Once again, pens are being tapped on foreheads, nails are being bitten and the aloo curry is burning. People are being haunted by this damaging question: Was it justified to place so much faith in him?

The pudding has been tasted and painfully swallowed. We don’t like it, Mr Modi. It has no meat in it.