Why is India, a secular and progressive state, refusing to ban triple talaq? 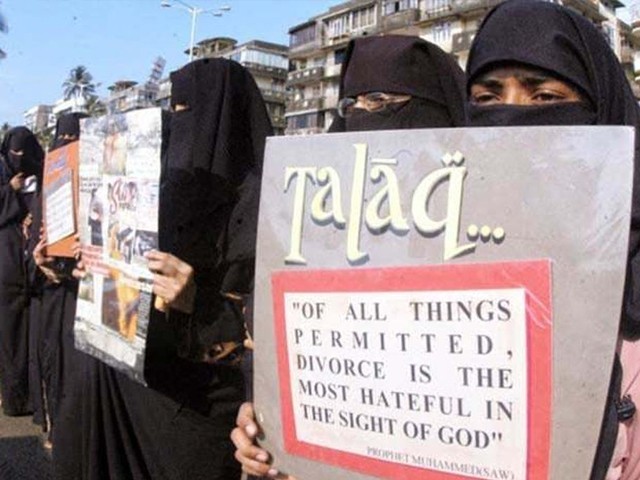 Muslim women in India protesting for the triple talaq ban to be implemented in India. PHOTO: PTI

Triple talaq or talaq-e-bidat is one of the eight ways to divorce in Islam. However, unlike popularly known in India, this form of irrevocable talaq is not Quranic but a post-prophet innovation of Umayyad Oligarchs in second century of the Hijri era – approved by the jurists of Hanafi Law.

One of the biggest misconceptions surrounding this concept is that people believe the husband can say “talaq” or “I divorce you” three times consecutively and annul their marriage. However, that is not the case. Rather it means the person has to wait for a period of three months, within which if the husband changes his mind or the concerned problem is resolved mutually, they can continue the marriage. The widely believed misconception was not present during the lifetime of Prophet Muhammad (pbuh) and is not present in the Holy Quran either, but was innovated later to suit patriarchy.

A tryst with severity, it is interesting to note that while 22 Islamic nations including South Asian countries like Bangladesh and Pakistan have banned triple talaq, it is still a recognised form of divorce in contemporary India, or let’s say in Muslim Law as administered in India.

Impregnated innovatively to trauma, torment and torture, triple talaq is used as a weapon in India in the name of religion by Muslim men who are not only devoid of ethics but also reconciliation. They forget the fact that talaq is the most compatible with human honour, gender justice, personal parity and medical morality. Talaq-e-bidat not only destroys a woman emotionally but also breaks her economically and socially.

Despite the fact that Islam has endowed women with certain inherent non-derogable human rights, Muslim women across India continue to suffer from the burden of triple talaq that symbolises suppression, subjugation and subordination of human rights towards them.

Moreover, the decision by All-India Muslim Personal Law Board (AIMPLB) of not abolishing triple talaq not only suppresses human rights to women but also disrespects the Holy Quran which treats rights of women as human rights. Perhaps, AIMPLB is forgetting the fact that they are taking away the rights of Muslim women which is already available to them through their religion.

After all, Islam is the first religion that identifies and even validates the indivisibility of individuality of a woman. By Islamic injunctions as ordained in the Holy Quran, a woman’s identity is independent and vindicated. Unfortunately, it seems AIMPLB is being neglectful and is behaving like an ostrich by sinking their heads under innovated things which are not purely Islamic.

It is so unfortunate that even though Muslim nations abolished triple talaq way before – Turkey in 1926, Egypt in 1929, Tunisia in 1956, and Pakistan in 1961 – it is still prevalent in India. Despite being a secular and progressive nation that promotes equality, the prevailing authority in India for Muslims – the AIMPLB in the name of tradition – is pronouncing that triple talaq is sacred, safe and secure for Muslim women in India.

This is the reason why the method of announcing talaq three times in one sitting is one of the most dominant norms of talaq in India. Some in fact still believe that talaq-e-bidat is the only method through which they can divorce their wife. According to an IndiaToday report, out of all the divorced Muslim women, 65.9% were divorced orally. Off late, more and more people are divorcing over text, emails and even WhatsApp. This is infuriating for Indian Muslim women as they are not in a position to manage themselves or their kids immediately after this sudden divorce.

However, even though a large section of Muslim women have been demanding a ban on triple talaq, the AIMPLB continues to adopt the policy of procrastination by putting the entire Indian Muslim community on tenterhooks.

Considering several things, the Allahabad High Court in December 2016 termed ‘triple talaq’ as cruel and unconstitutional. The Supreme Court too on March 30, 2017 announced that a five-judge constitution bench will start hearing cases to decide on the “constitutional validity” of the three practises among Muslims – triple talaq, nikkah halala and polygamy.

When the SC announced that gender equality and a women’s dignity is not negotiable, the AIMPLB claimed that any action against the triple talaq would be an infringement on their rights to follow their religion. They further urged the SC of India not to interfere in their personal laws as the ‘issue’ falls outside the realm of their judiciary.

Now that AIMPLB is recognised as the body to attend on religious affairs of Muslims and is accountable to the Muslims of India who have pinned down their hopes in the collective wisdom of this body, it must attend the problem at the earliest with maturity rather than ego and ignorance.

It is high time that the members of AIMPLB codify the Muslim Personal Law as directed by the Holy Quran and keep their parochial pursuits and primordial perceptions aside. They should not forget the fact that talaq-e-bidat does not find any approval anywhere in the Holy Quran. In fact, triple talaq is a distortion of the Holy Quran.