Will radicals succeed in making India ‘for Hindus only’? 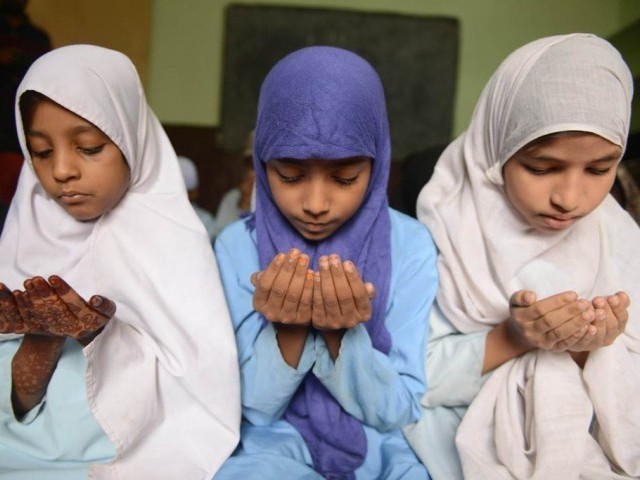 Indian Muslim students offer 'Dua' prayers in their class room during the holy month of Ramadan at Madrasatur-Rashaad religious school in Hyderabad on July 17, 2013. PHOTO: AFP.

The Hindu right wing government in the central Indian state of Madhya Pradesh finally withdrew the order introducing lessons from the religious text Bhagavad Gita in school curriculum. They also wanted to include Hindu religious teachings in the curriculum of Urdu schools from the academic year 2013-14.

The Bharatiya Janata Party (BJP) ruled state came under heavy criticism from Muslim organisations and secular political parties for its attempt to alter the secular character of the constitution.

What the BJP is attempting to do in Madhya Pradesh is not something new.

During its rule in Delhi, between 1998 and 2004, the BJP-led government made serious attempts to change the school text books and rewrite history by appointing communal academicians and historians in some of the important institutions that formulate educational policies. The whole idea was to capture the mind of young people and teach them a history which does not reflect the diversity of India and portray India as a Hindu nation.

In this context they started teaching mythology in history curriculum thereby trying to prove that myths in Ramayana and Mahabharata are history and India has always been a Hindu nation. This way they attempted to show the Muslims and other minorities as others who have never been part of Indian history.

This revivalist worldview is being taught in more than 70,000 private schools run by different Hindu organisations across India. They are reaching out to tribal groups and indoctrinating them with Hindu religious teachings and sowing the seeds of religious animosity in the society.

Let us not forget that in the Gujarat riots of 2002 – where thousands of innocent Muslims were killed by Hindu fanatics – the indoctrinated tribal people played a prominent role. They were part of the fanatic mob that conducted violence against Muslims.

Moreover, the over-15-year rule of the BJP in Gujarat has communalised the state to such an extent that any debate about the country’s plurality receives derision from middle and upper class of society. The western Indian state has become a laboratory of radical Hindus.

Hindu extremists created havoc in the eastern Indian state of Orissa in 2008 where they massacred more than hundred Christians and destroyed many of their houses for not following the Hindu ways of life.

Infiltration into education is part of the larger game plan of converting the nation into a Hindu state and undermining the religious diversity of the nation, and the fountainhead of this project is Rashtriya Swayamsevak Sangh (RSS), the ideological godfather of the BJP.

Narendra Modi, a radical Hindu leader and the Chief Minister of Gujarat, who was the architect of the Muslim massacre in 2002, is the product of this school of thought. He is the presumptive prime ministerial candidate of the BJP and poses a very serious danger to plural tradition of the nation. His rise to the national politics forces us to make a choice whether we want to see India as a modern, plural country or a nation intolerant of other cultures and faiths.

Though the chief minister of Madhya Pradesh withdrew his dictat keeping in mind impending assembly elections, it, however, reveals in no uncertain term the wider game plan of the Hindu fanatics to advance the majoritarian agenda and accentuates the deep fault line between different faiths.

This is not a new game plan. They have been at work since 1925, when the whole nation was participating in freedom struggle RSS and its cohorts were busy propagating communal agenda. They cannot escape the blame of building up a situation which finally led to the partition of the country in the name of religion.

Even after Independence in 1947, the organisation continued with its divisive agenda and it led to the assassination of Mahatma Gandhi at the hands of a Hindu zealot – a by-product of the RSS school of thought. Much before Islamic terror became a buzzword, RSS laid the foundation of Hindu terror in modern India. The violence in Gujarat in 2002 against a minority was the extension of that terror.

A few years ago a Hindu fanatic, Aseemanand, confessed the involvement of the Hindu organisations in terror attacks in some of the Muslim dominated areas, like Malegaon in 2006 and 2008, the Samjhauta Express bombings (2007), a bomb blast at a Sufi shrine in Ajmer Sharif (2007), the Mecca Masjid bombing  in Hyderabad (2007), and an attack in a minority area Modasa, Gujarat (2008).

The overwhelming secular and liberal forces in the country need deep introspection. Can they allow the nation to be a playground for rabid communal forces that are out to radicalise society and alter the pluralistic character of the nation?

66 years ago, India made a tryst with destiny and made a pledge to establish a modern, plural and secular democracy; the time has come to redeem that pledge again and reassert its faith in the basic principles governing the nation.

The radicalisation of the main opposition party, the BJP, is a matter of concern. They are making a serious bid to capture power in Delhi next year. If that happens then what the Madhya Pradesh government is attempting to do today the BJP will try to replicate it in other parts of the country.

Should we allow the forces inimical to idea of India to succeed?