Gandhi’s forgotten sacrifice: A lesson neither India nor Pakistan learnt 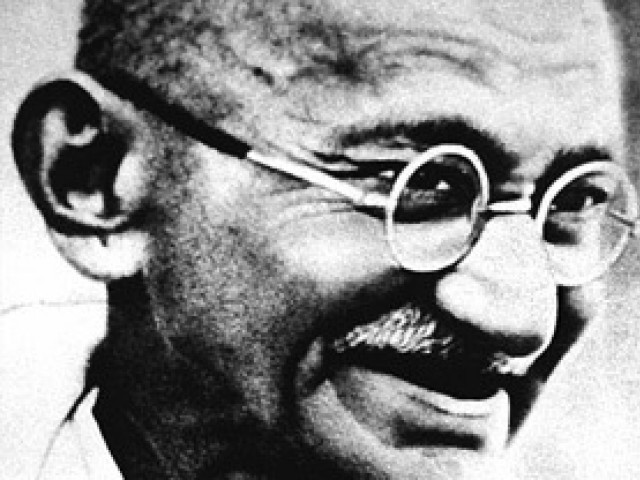 Nobody, nobody paid heed to Gandhi, neither Hindus nor Muslims. He was let down by all of us alike! PHOTO: AFP/FILE.

At ten minutes past five on January 30, 1948, Mohandas Karamchand Gandhi was crucified on the cross of bitter Hindu-Muslim blood feud. This resolutely courageous man endowed with an indomitable spirit kept fighting for the Hindu-Muslim unity until he was, alas, assassinated by a Hindu extremist. The Mahatma, however, achieved in death what he could not achieve in life; peace between the two communities, although it lasted merely a brief period.

The next day, in a most memorable tribute of all, the editorial of Hindustan Standard read:

“Gandhi ji has been killed by his own people for whose redemption he lived. This second crucifixion in the history of the world has been enacted on Friday – the same day Jesus was done to death one thousand nine hundred and fifteen years ago. Father, forgive us.”

The father can forgive his children, but can we forgive ourselves for what we did to him? What did he get in return for all the sacrifices he made for the sake of Hindu-Muslim unity? He got nothing but three bullets into his stomach from a Hindu maniac and apathy from the Muslims. The fact of the matter is whenever Gandhi needed their support, both Hindus and Muslims, turned their backs on him.

True, Gandhi was deeply disappointed with the unhelpful attitude of the Hindus, but, he was equally hurt by the callousness of the Muslims. ‘India’s Iron Man’, the biography of Sardar Vallabhbhai Patel by Balraj Krishna, offers a vivid account of how Gandhi perceived Muslims’ apathy towards him and how he resented their uncooperative attitude. He seldom made his grievances against the Muslims public though, lest he should be misconstrued.

In the quiet, uncontaminated climate of the Yervada jail in 1932, and in the company of his most trusted colleagues including Sardar Patel, Gandhi, for the first time, revealed how much ‘sorrow and pain’ were caused to him by the Muslims’ attitude towards him in the Kohat communal rioting and at the 1931 Round Table Conference in London. In a depressed vein, Gandhi said,

“Whom should I tell the insults I have borne on behalf of the Muslims? For their sake I have drunk bitter cups of sorrow.”

One day while reading an Urdu school textbook, Gandhi admitted,

“The book pours out maximum poison. It was prescribed by the government as a textbook before the Hindu-Muslim conflict began; and today’s Muslim youth has been brought up on such books.”

On another occasion Gandhi referred to a fourth standard Urdu primer of Lahore’s Anjuman-i-Himayat, and regretfully observed,

“The reading of this book makes one sad. It appears the Muslim children are taught violence and bloodshed from their childhood.”

“Iqbal’s opposition to (single) nationhood is shared by many Muslims. Some speak out; others don’t. Iqbal now repudiates his ‘Sare Jahan Se Acchha Hindustan Hamara’ song.”

On another day, Gandhi asked Mahadev Desai to draw Patel’s attention to the distorted version of the same song in a government school textbook in Urdu. The song propagated Pan-Islamism, and its first two lines read:

(From China to Arabia, the whole territory is ours; India is ours; we are Muslims , and the whole world is ours.)

Gandhi in a melancholic vein commented,

“The Muslim boys are brought up on such education. The book hasn’t a single lesson which should teach the Muslim boys that this country is theirs and they should take pride in her. Not only that. As a result, the Muslims have developed enmity with others.”

Gandhi’s regret was that all this was happening despite what he had done or undergone for the sake of Hindu-Muslim unity. Who can forget his heroic fast unto death, held to save the lives of those thousands of Muslims who were sitting ducks in Calcutta amidst the ongoing communal frenzy, in a wretched hovel at the city’s Beliaghata Road in August, 1947? Who can forget his last fast unto death in Delhi, after the cataclysmic partition, held to protect the lives of those vulnerable Muslims who had become refugees in their own country, and to ensure that ‘Pakistan gets its due share’?

Gandhi led the Khilafat agitation, boldly bearing attacks from senior Congress leaders, Hindu leaders and the saintly Britisher, CF Andrews. And it was at the Round Table Conference, which could have provided India with an opportunity to gain independence in 1931, that Gandhi met his Waterloo at the hands of the Muslims. Maulana Shaukat Ali had told the American journalist William Shirer:

“If the Hindus don’t meet our demands this time, we’re going to make war on them. We ruled the Hindus once. At least we don’t intend to be ruled by them now.”

This was the last straw that broke the camel’s back. Gandhi had to admit to ‘an inglorious end’ to his years of labours. According to Shirer,

“This failure, as Gandhi often said, was the greatest cross he ever bore.”

“Are there any Muslims who will listen to you?”

The truth is nobody, nobody paid heed to Gandhi, neither Hindus nor Muslims. Yes, he was let down by all of us; we deserted him whilst the forsaken Mahatma fought alone for peace.