From Fatima Jinnah to Nasira Iqbal: Can Pakistan make the choice 53 years later? 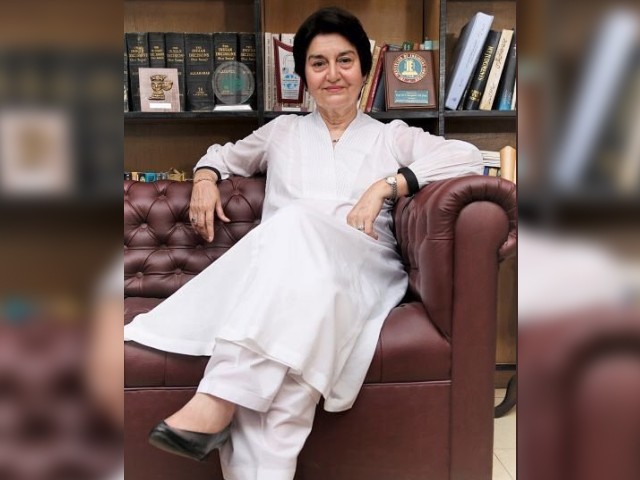 Social media was rife with speculation that Justice (retd) Nasira Iqbal was being considered for the office of the President of Pakistan. PHOTO: TWITTER/ ANWAR LODHI

The first woman to run for Pakistan’s presidential elections did so in 1965, and it was Fatima Jinnah versus Ayub Khan. The latter swept the elections and was sworn in as president. That was 53 years ago.

Now, 53 years later, is Pakistan ready to make history and elect the first woman president of the country?

Iqbal was among the first five women to be appointed to the LHC. Additionally, she heads the activist group Concerned Citizens of Pakistan Society (CCP). Among other honours, she received the Fatima Jinnah Medal for Women’s Rights in 2006, the Woman of the Year Star Award in 2007, and the Wonder Woman Award in 2011. Iqbal is also part of the Supreme Court Bar Association of Pakistan.

A woman of her stature and qualification would make a fine president and break the illusion that only businessmen can make it to the country’s top office. After all, the presidential stature requires someone who is involved with society and is aware of the crucial issues that plague the country. The president should also deliver concrete statements and have an opinion about the state of events in their country. A retired Justice of the LHC with brilliant academic skills would thus make a promising president for the country.

Over the years, many Pakistanis have complained of the silence of current President Mamnoon Hussain, and multiple memes have since then become trends on social media platforms. The general understanding is that after Asif Ali Zardari revoked the controversial amendment that gave executive powers to the president, the president’s position is solely a ceremonial one.

Even so, the ceremonial position holds unimaginable powers; the president is the representative of the country across the world. The prime minister and president should ideally be candidates who would represent the country adequately on national and international forums. While President Hussain’s tenure passed calmly, it left some with the feeling there was more the president could have done.

Further, electing the first female president of the country would catapult Pakistan into a seemingly more progressive state, where women are granted high office. Decades after Shaheed Benazir Bhutto took the landmark step of running for the office of prime minister, these rumours suggest that Iqbal would be next female to set new precedents by occupying the president’s office.

For the Pakistan Tehreek-e-Insaf (PTI), this would be the defining moment of their government; they would ensure immortality in history books and past recollections if they succeed in empowering women.

Arguments circulating on the press and online claim the Imran-led party can give high offices to women, but that doesn’t imply that their policies would reflect the same. However, I believe that all steps taken to push women out of the glass ceiling will contribute to a better country. I am not a PTI fan and I did not vote for them, but if they nominate Iqbal, they would have my respect. It is not easy to be a woman in Pakistan, and history has taught us how difficult it was for Benazir to break the androcentric walls that patriarchy helped establish.

On a separate note, while watching the FIFA World Cup 2018, I learnt that Belgium has a female president. Croatia’s president is also a woman. Standing in the office while searching these women on Google, I thought to myself, what a sight it would be to see a woman taking oath as president! Perhaps Iqbal’s entrance into the president house will give Pakistan that one push needed to ensure that women are respected and taken into account.

I also believe the increase in rape-murder stories and domestic issues can also be affiliated with the lack of respect shown to women politicians. There have been incidents where mud-slinging reached horrible standards, where women have been called “tractor trolley” without any consequences. This lingo should not be acceptable in any society. And I believe that if a woman presides over the country, all the men and women who thought that it wasn’t possible in the first place will be in for a real surprise.