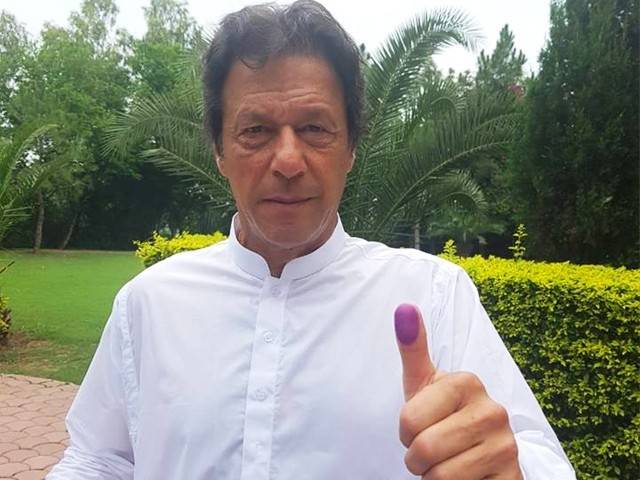 For the betterment of Pakistan, this needs to be a clean victory, one that his supporters and his party can be truly proud of, one that is not tainted. PHOTO: FACEBOOK/ PTI OFFICIAL

Our electoral process is far from perfect. A great democracy would have middle class and lower class representatives, performance-based elections, and sustainable policies on the manifesto. We have none of that. But arguably, we can still call our system a democracy. And that is why we need to salvage what we can.

This was probably the worst possible outcome of the election. The worst. Not because Pakistan Tehreek-e-Insaf (PTI) couldn’t get a majority, or Pakistan Muslim League-Nawaz (PML-N) did so poorly, but because a total of six parties rejected the result. If we are to convert those figures in votes, then perhaps around half of the population has rejected this election. People and leaders are calling this a selection rather than an election.

Pakistan Muslim League (Nawaz) wholly rejects the results of General Elections 2018 due to manifest & massive irregularities. Form 45 was not given to our agents, results were stopped & votes were counted in the absence of our poll agents. This is both unbearable & unacceptable!

Now, Imran Khan was expected to win; his media management, performance in Khyber Pakhtunkhwa (K-P), ambitious campaign and Nawaz Sharif’s conviction perhaps sealed that win. So why can’t half the population accept the results?

There are two narratives that seek to answer this question.

First, that Imran has delivered such a knockout blow to status quo candidates in Karachi, Punjab and K-P, that it is simply not acceptable to them that they have lost. And no one wants to admit defeat. It’s like boxing, where fighters even in the most lopsided matches rarely concede defeat.

The second narrative is that these parties have reasonable grounds to complain and allege rigging. If the votes are being counted without the presence of polling agents, then it certainly does not point towards transparency and a free and fair election.

It’s now past midnight & I haven’t received official results from any constituency I am contesting my myself. My candidates complaining polling agents have been thrown out of polling stations across the country. Inexcusable & outrageous.

Getting reports of various polling stations in NA243 where MQM’s polling agents are being removed from polling stations and not given the form 14. ECP take note of this so called “Transparent elections” #ElectionPakistan2018

This is the result Presiding Officers are giving in Khi. Secretary ECP is unaware till the desired results? pic.twitter.com/RT3iChAsCb

The truth probably lies in the middle, that there may have been inaccuracies in the vote count, but not to the extent that opposition alleges; it probably made a marginal difference in a select few seats. But that is just my opinion, the truth could be anywhere on this spectrum.

So what should Imran do?

Well, he’s certainly familiar with the art of appeasement. That’s what he should do. Right after the 2013 General Elections, Imran alleged rigging and asked for re-verification of votes in four constituencies. His opponents did not grant him this minor wish, but that was a mistake. After all, no one knows rigging claims like Imran does. Since he’s all about fair elections, he should grant his opponents’ request to show he won fair and square.

Because he is the prime minister select of this country, and needs to act like it. If he really has won the elections, and has won it fairly, then there should be no cause for concern for him.

However, the matter is a bit different this time around. He needs to appease six different parties. Some, however, are a bit more relevant than others. Pak Sarzameen Party (PSP) and Tehreek-e-Labbaik Pakistan (TLP) are unlikely to cook up a storm. The PML-N along with the Pakistan Peoples Party (PPP) and Milli Muslim League (MML), certainly hurts the elections’ credibility. So he might need to do more for the opposition-to-be.

One reasonable remedy could be that he opens up two constituencies for each party. And before doing that, they agree upon a few rules. For instance, at what extent an inaccuracy will be deemed to have made the elections tainted? Perhaps, these are questions for the Election Commission of Pakistan (ECP) or the judiciary to answer, but there needs to be prior agreement on them.

Imran fought a brilliant campaign, but he needs to stop fighting now. Accusations such as the ones levelled against him go into history books. For the betterment of Pakistan, this needs to be a clean victory, one that his supporters and party can be truly proud of, one that is not tainted. Concessions, after a brilliant victory might seem unfair, but it’s what is perhaps needed for Imran to proudly claim that that the country chose him, it is the people who chose him, and no one else.