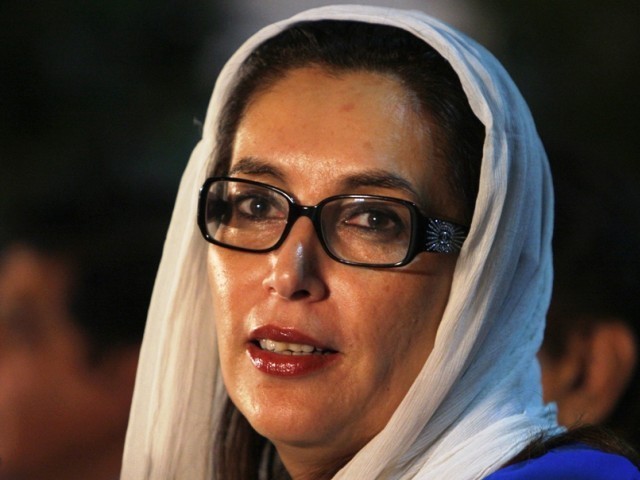 If Bilawal doesn’t come to the forefront to lead the party, PPP will be destroyed completely. PHOTO: REUTERS

Today we observe the seventh death anniversary of Benazir Bhutto – Pakistan’s first female prime minister and a woman of extraordinary talent. Since her first tenure as prime minister, we saw how she took charge of Pakistan Peoples Party (PPP) and led it through thick and thin. However, seven years later, if we take a look at her party now, we will see that a lot has changed.

For instance, PPP workers are still not sure who their party’s leader is.

Even though Bilawal Bhutto Zardari was made party chairman soon after Benazir’s tragic death, he remained away from the political circus because of his studies. In his absence, his father, Asif Ali Zardari, took control of the party and pulled all the strings.

But the confusion started sometime in late 2008 – a few months before Benazir’s first death anniversary.

During PPP’s government, the courts asked Zardari to choose between the country’s presidency and co-chairmanship of PPP. While a prudent step would have been to opt for one position and leave the other completely, we saw how Zardari and the new version of PPP made a complete mess out of everything. The party first defended his right to remain co-chairperson and then changed its stance completely stating that Bilawal was to head the party while Zardari would occupy the presidency.

The presidency was dearer to Zardari than his own party.

Because of this inconsistency, PPP workers remain unsure as to who their leader actually is.

While some party-workers still consider Zardari as party head, there are others who find the phrase ‘Aik Zardari sub pe bhari’ (One Asif Zardari is more than enough for everyone) most suited to the ex-president of the country.

PPP workers do not have the same bond with Zardari that they had with Benazir. And how can they? Unlike Benazir, Zardari is never seen in public, participating with the masses or mingling with them. During his five years as president, he remained confined to the presidency, with no physical contact with his workers whatsoever. In Bilawal’s absence and Zardari’s ignorance, it was Faryal Talpur who took control of and managed all party affairs. While she was not the chairperson of PPP, she had all the power she needed to do whatever she wanted – which was something even Benazir didn’t have.

This brings us to another difference clearly seen in the post-Benazir PPP era; the role of the central executive committee (CEC) has greatly diminished. In the past, we remember how, for certain matters, Benazir had to contact her party’s CEC to discuss and present a consensual decision. We have seen, dozens of times, how her party office bearers had to travel to Dubai and London to attend meetings for important party-related issues. But for the last seven years, PPP’s CEC only meets on December 27th and passes a resolution endorsing complete confidence in Zardari. Except this, the CEC neither has any role in the party affairs nor does the leadership take them into confidence. Especially at the provincial level, it is Talpur who makes all the calls and takes every decision – often without consulting any other leader.

During PPP’s government, Talpur was not only managing provincial affairs but various federal ministers were also under her direct supervision. One may check how her assets climbed up between 2008 and 2013. At one point she also wanted to be the chief minister of Sindh but was unable to win the support of her brother.

Rumour has it that a possible rift between Zardari and Bilawal has occurred.

In the wake of the Peshawar attack, the party decided to cancel the Larkana programme for Benazir’s death anniversary, but one questions whether this plan was really because of the attack. Bilawal’s absence from Garhi Khuda Bux yesterday, as his father and sister visited his mother’s grave showed that there was indeed trouble in paradise. After seeing minimum audience at PPP’s convention held in Lahore, Zardari may now have realised that the popularity he enjoys amongst PPP workers is much less without his son. Sources claim that almost two thirds of the workers didn’t show up at the convention after they were told that Bilawal wasn’t coming.

When Zardari was asked about Bilawal’s absence, the tailored answer revolved around how it was up to the family to decide when Bilawal will join politics. But shouldn’t the workers decide when they are comfortable enough being led by Bilawal? Previously the PPP workers were always made to feel part and parcel of the Bhutto family, doesn’t that give them the right to know when Bilawal plans on joining the party? Wasn’t PPP a Bhutto led party? Then why the delay in affording Bilawal his rightful place as heir to the party throne? Does Zardari feel that Bilawal may not work the way he wants him to and jeopardise his plans?

These questions need to be answered.

While Zardari might not have realised this, he is one of the most unpopular politicians in the country and now, even his followers don’t support him. One can imagine how disappointed PPP workers are when those who didn’t leave the party even during Ziaul Haq’s oppressive regime have decided to quit the PPP to join other parties – all because of how Zardari has fared.

Benazir used to discuss her decisions with prominent members of her party and resolved any reservations that were put forward. Her successor, however, has done the exact opposite. It seems that no one has the right to question Zardari, or his sister, or his close friend Asim Hussain, as to how the party is run. People who previously had nothing to do with the PPP are now seen making key decisions, whereas Benazir’s heir – Bilawal – seems to have no say whatsoever in how the party should work.

PPP encapsulated a very strong organisational structure with political activists and seasoned politicians. Today’s PPP, however, has builders and contractors as its office bearers. The party is on the verge of collapse, the situation in Sindh is getting worse day by day, corruption is unfolding in every government department and deaths in Thar are acting like a slow a poison for PPP’s future prospects. And worst of all, PPP’s pseudo-leadership doesn’t seem to understand this or care.

Even though Bilawal may lack the maturity level and/or political will (as his latest tweet saying “jo aamiryat ka yaar hai, wo ghaddar hai, ghaddar hai” right after Makhdoom Amin Faheem met Pervez Musharaf at his residence, shows), he is still PPP’s last hope. Many PPP workers want to support Bilawal and guide him, but they aren’t sure if he will own up to his position or fall prey to his father’s bidding and work as his stooge.

If Bilawal wishes to have a political career, he needs to stand up and come out of his father’s shadows. If he doesn’t come to the forefront to lead the party, PPP will be destroyed completely and the biggest loss will be to Pakistan, for which PPP is still the only party of the federation and is somehow still a source of unity.

The party now lacks the charisma Benazir had when she was alive. And one wonders how long this new leadership can recycle that hold without making any attempts at leading the party themselves. Seven years later, on Benazir’s death anniversary, one wishes for a miracle or divine intervention to save her party. Otherwise, in the coming years, I am not even sure there will be a party.

An aspiring journalist and a political commentator, he tweets as @JumaKhan79 (twitter.com/jumakhan79)