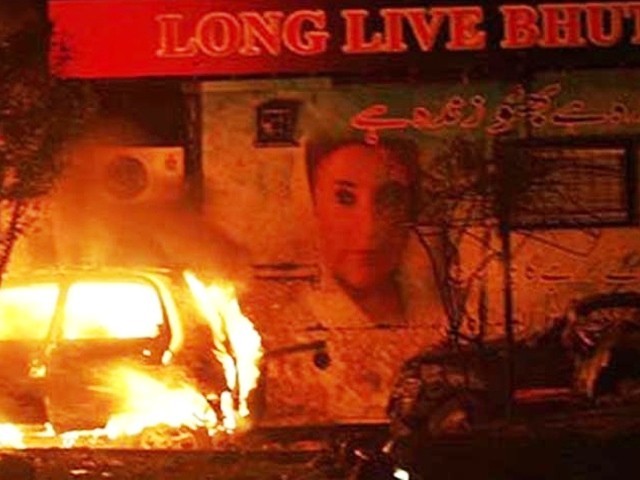 A car burning next to a truck which had carried former prime minister Benazir Bhutto during her welcome rally in Karachi. PHOTO: REUTERS

On December 27, 2007, Benazir Bhutto was assassinated. The reverberations from those guns shots were heard and felt all over Pakistan. Many of us have distinct memories of where we were and what we were doing when we heard the news. We have stories of our personal experiences from that day. Some of us were stuck in traffic; some of us were stuck at home. Despite the variance in our experiences, there was one common thread that tied all of our stories together – feelings of panic, hysteria, confusion and chaos.

On that fateful day, I was attending a training session at the Pearl Continental Hotel in Karachi. Sometime around dusk, news started pouring in about the assassination attempt on Benazir Bhutto. No one bothered too much with that bit of news because… well she was alive. Since the incident didn’t take place in Karachi, we focused on finishing the remainder of the training. The news of her death hadn’t been broken to the public yet.

A few hours later though, the face of Karachi changed.

It was announced that Benazir Bhutto had died.

It was like a scene from an apocalyptic film. Phones began ringing. People began talking in hurried, panicked voices. People pushed and shoved to rush out the doors and into their vehicles. Rumours started swirling about angry mobs scaling walls of residences in our localities (which later turned out to be untrue).

The city fell into complete anarchy.

I got into my car with nervous hands and a lump in my throat. I gripped my steering wheel to steady myself and got off from Karsaz Road towards Aziz Bhatti Park to avoid traffic jams on University Road.

Drivers abandoned traffic rules and pedestrians ran across roads without any semblance of sanity.

I was surrounded by burning cars. I held my breath as I thought,

Three protestors armed with sticks and rods confronted me in the vacant ground adjacent Baitul Mukarram mosque. Panic struck me and I started driving on the muddy ground. My tires got stuck in the mud and no matter how hard I stepped on the accelerator, my car refused to move. Fear gripped my entire body as I realised I couldn’t be more vulnerable.

That’s when I saw the three miscreants, aged between 15 to 20 years, charging towards my car while I was seated inside. Upon seeing my beard, one of the miscreants shouted,

(They are the ones who killed Bibi.)

One of them raised the rod in his arms over his head and smashed the windscreen of my car. Seconds later, his other cohort perforated the rear screen as well. The third one was charged with hitting me, but I ran out, away from my vehicle as fast as I could. I twisted my ankle in the process. I thought I was going to die.

The three street urchins smashed my car in a matter of minutes, and drove off with it because I had left the keys inside the ignition. They were drifting my car in the vacant ground and hurled abuses and slogans while I watched helplessly. They took the vehicle in a dark corner of the ground away from my view and siphoned off the car stereo, console, spare tire, my laptop and even my jacket. Afterwards, they parked the car in the same place, as if they were inviting me to collect it, but they took the keys with them.

I gathered my breath and with the help of a passer-by tried to pull the vehicle away from the empty ground and away from the gaze of another group of miscreants, but then another bike riding team arrived with tools and a piece of cloth.

This time I was sure I was going to be killed.

The expertise of this second team was remarkable because they took less than a minute to torch my car. They broke open the fuel tank side cover, dipped a piece of cloth in gasoline, lit the cloth using a matchstick and threw it on the seats since the upholstery catches fire very quickly. In a matter of six to seven minutes, I saw the fuel tank explode.

I cried as I limped across University Road, completely disoriented, with my twisted ankle.

I kept turning around to see my car that was now engulfed by flames.

The moment I entered a block of Gulshan-e-Iqbal across Federal Urdu University, a group of people with a camera approached me and asked me to narrate the great injustice that I had to endure.

I felt my blood boil.

I was already seething with anger and their questions sent me over the edge.

I snapped back at them that I would not allow them to record my interview or force me to blame any community or party.

Dismayed by my reply, they tried to intimidate me but the grave expression on my face sent them away.

I went to my sister’s house because the area around my residence was still too dangerous and volatile.

The next day, on December 28th, I went to the Aziz Bhatti police station to register an FIR, since I had lost my passport, CNIC and my laptop. The police officials refused to register an FIR, and told me that more than 125 vehicles had been burned within the jurisdiction of their police station so an individual FIR could not be registered. They gave me a copy of a collective FIR, where a tiny yellow highlighted registration number was what was left of my car. They refused to register an FIR for my laptop, passport and CNIC and asked me to leave.

As I walked home, my ankle throbbed in pain. The streets were littered with the remnants of chaos. Traffic was slim. The air had a taste of desolation.

When I reached Sir Syed University, two people riding a motorcycle stopped me. They demanded my cell phone and threatened to shoot me.

As the man waved a gun in my face, I thought about letting him shoot me.

I thought about holding on to the last shred of integrity that I had left.

But I handed over my cell phone. And with it, my last nerve.

In two days of utter mayhem in Karachi, I had three separate FIRs: For my car, laptop, passport and CNIC.

But my biggest concern was that I could not report the worst crime – the injury on my being.

I am still haunted by events of that day. Since then, I have started carrying licensed weapons while driving with my family, because I cannot, in any way, let the safety of my family be compromised.

After December 27th, something changed in the city’s air. I know many Karachiites who have obtained arms licenses to take their security into their own hands.

That day, isn’t just the day that Benazir Bhutto died, it’s the day Karachi and its people changed forever.