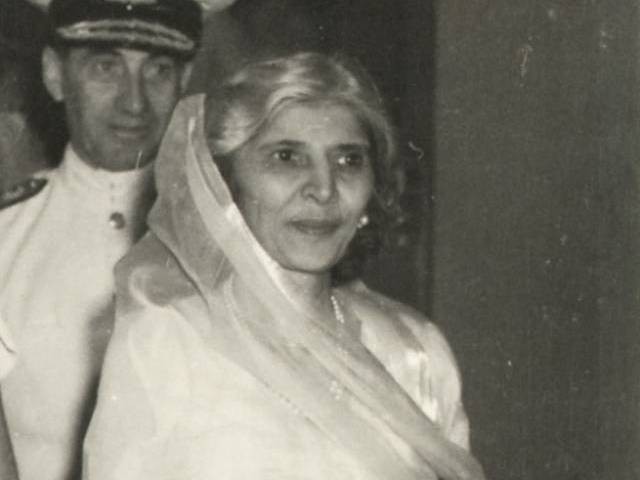 Forty-nine years later we continue to wonder if the madar-e-millat’s life was ended prematurely. PHOTO: www.broadlandsarchives.com

Fatima Jinnah, the sister of Muhammad Ali Jinnah, and Pakistan’s first woman presidential candidate all the way back in the 60s, remains a mystery for the nation, both in her life and her death. Her portrayal in various biographies of Jinnah, as well as popular fiction, has either been ambivalent or even net negative.

The recently released Indian novel, Jinnah often came to our house, portrays her as a spoilt child and an overall malignant influence on Jinnah, instrumental in turning him from a leading light of the Indian independence movement and ambassador of Hindu-Muslim unity to a dogged separatist and champion of the Muslim cause. She is further portrayed as a sister jealously guarding over her eldest brother like a hawk. Even otherwise she is portrayed as an ill-mannered and apathetic woman for whom the milk of human kindness is completely evaded. This is a shameful portrayal of a woman who was as resourceful and bright as her illustrious brother. It is a terrible reduction of the remarkable stateswoman and farsighted individual that Fatima Jinnah was in her own right.

Much of the negative portrayal of Fatima Jinnah stems from her rocky relationship with another extraordinary woman in Pakistan’s history, Begum Ra’ana Liaquat Ali Khan, the wife of Pakistan’s first Prime Minister Liaquat Ali Khan and the first woman to serve as the governor of a province in Pakistan. Their mutual antipathy was legendary. Ra’ana Liaquat Ali Khan and other women of the Muslim League often complained that Fatima Jinnah was too possessive of her brother and did not allow them access to him. But there may have been a political reason for it as well.

“It is also a matter of wonderment for me that the very sentences that you requested to omit from the speech were the ones which could not be broadcast due to the technical problem. It seems your transmitters are very obedient and submissive as they are always ready to create technical problems in order to facilitate you. The people who tried to create problems in my original speech, and stopped my voice from reaching the people, and tried to omit certain sentences of my speech, have in fact highlighted the importance (of these sentences) to the people. You mentioned in your letter that your regional stations reported about the flow of my speech. Had it been so, you would not have taken the trouble to apologise. As far as complaints by the people are concerned, it is your duty to satisfy them. Your explanation is neither satisfying, nor assuring. In such a case, an apology is merely a soft version of pleading guilty and admitting to one’s crime.”

Fatima Jinnah was almost always at odds with Pakistan’s rulers.

If Liaquat Ali Khan and his coterie were at the receiving end of her sharp tongue, she was particularly disillusioned by President Iskandar Mirza’s first republican government which lasted from 1956-1958. This is why when General Ayub Khan took over after Iskandar Mirza and abrogated the Constitution in 1958, Fatima Jinnah initially welcomed it, calling it a new era in Pakistan’s history.

Soon, however, she turned against the Ayub regime as well. She was particularly put off by the basic democracy experiment which took away adult franchise from the people of Pakistan. This was Ayub Khan’s ‘democracy’ suited to the ‘genius of the people’. As with Iskandar Mirza, Ayub Khan took a dim view of democratic politics and the will of the people. Instead, both these military men had wanted to shape a paternalistic state which would dictate policy top down. Fatima Jinnah was by training and inclination a democrat, even more staunchly so than her brother. She was to ask,

“What sort of democracy is that? One man’s democracy? Fifty persons’ democracy?”

Therefore, when the combined opposition approached her to become the presidential candidate against Ayub Khan in 1964-1965, she readily agreed. It must be remembered that her backers included people like Khan Abdul Ghaffar Khan, Wali Khan and Shaikh Mujibur Rahman, all to be called traitors variously in our history. All of them had concluded that Fatima Jinnah, being Jinnah’s sister and his political heir, was the right person to deliver Pakistan from a military dominated national security state that it was becoming. People all over Pakistan, particularly in East Pakistan, rallied to her support, a poignant fact that must be underscored when people claim that Bangladesh was bound to leave the union. Had Fatima Jinnah been elected in on January 2, 1965, Pakistan’s history would have been very different. South Asia would have been spared two costly wars and a second partition. Pakistan would have made history. While Pakistan did elect Benazir Bhutto as the first prime minister in the Muslim world and therefore the head of government, Pakistan has never had a female president or head of state. Fatima Jinnah ran her campaign around one main issue – adult franchise for the people of Pakistan.

I believe that Fatima Jinnah, had she been elected, would have presided over the making of Pakistan’s first truly democratic constitution, which would have included East Pakistan as well. One can only imagine what an extraordinary country we could have turned out to be. As it so happens the election was heavily rigged in favour of Pakistan’s Field Marshall president, who ran a dirty and shameful campaign.

A female dog was paraded in Gujranwala with a lantern hanging from its collar. The lantern was Fatima Jinnah’s election symbol. Fatima Jinnah herself was denounced as being backed by Indians and Americans. The support by Ghaffar Khan’s Khudai Khidmatgars, who had historically opposed partition of India, was provided as evidence of Indian backing. It just goes to show that even Jinnah’s sister was not immune from these base allegations that are commonplace in the verbal armoury of the so called Pakistani nationalist.

Time magazine reported on how Ayub Khan had become a headless chicken,

“Nonetheless, he is running scared, because candidate Jinnah has managed to focus every form of discontent in the country. To brake her bandwagon, he abruptly decreed that elections would be held January 2nd, instead of March, as originally scheduled. Explaining lamely that the situation is “a little tense,” the government also rescinded a law specifying that political rallies must be open to the public. At closed meetings with groups of electors, Ayub answered practical questions sensibly enough, but kept lashing out at the opposition with growing anger. Countering Miss Jinnah’s repeated charge that he had been unable to restrain the US from helping Pakistan’s No 1 adversary, India, Ayub’s campaign, in fact, was turning increasingly anti-American.”

In the aftermath of the 1965 war and especially with Zulfikar Ali Bhutto’s defection from the Ayub camp, the Ayub regime began tottering on the brink. Then in 1967, on July 9th, Fatima Jinnah was found dead in mysterious circumstances in her house. It was said that her dead body had deep cuts and wounds. Fatima Jinnah had only a day before her sudden death attended a wedding and was found in good spirits. It was not until a few years later that Ghulam Sarwar Malik filed an application under Section 176(3) of the Criminal Procedure Code 1898 calling for exhumation of Fatima Jinnah’s remains for post mortem.

Nothing came out of it predictably.

Forty-nine years later we continue to wonder if the madar-e-millat’s life was ended prematurely. The powers that we had seen, the hold she had on the people. Did they fear her leading a final movement against the Ayub regime? However you look at it, one thing is certain. The fate of a united Pakistan was sealed with her death.

Every year there is some mention of Fatima Jinnah on her birthday (July 31st) or her death anniversary (July 9th) but hardly any mention of how patchily we treated the founder’s sister. During her life, we censored her and tried to marginalise her. An election was stolen from her. Her book, My brother, was cruelly censored by Shariful Mujahid in the name of the “ideology of Pakistan”. Even small things like the affidavit that she signed declaring that her brother was a “Shia Khoja Mohammadan” were deliberately obscured. And in the end, she was probably murdered. That is the only plausible conclusion one can draw from the events surrounding her sudden death.

Pakistan is a poorer less hopeful place because of the way we treated the woman we pretended to call our mother.