PML-N’s new manifesto has more hits than misses, giving it an edge over PPP and PTI 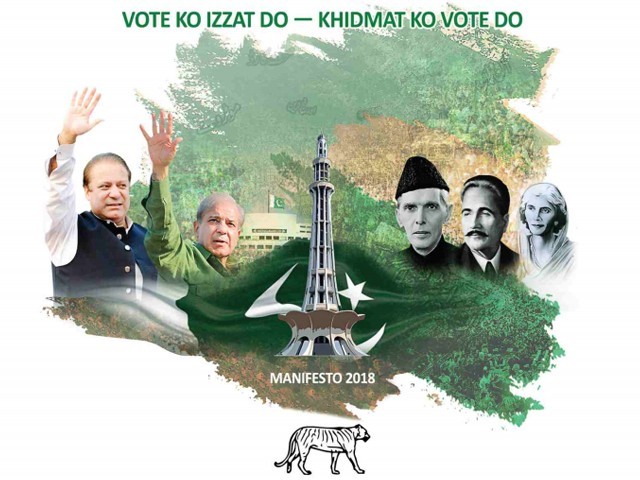 The manifesto is detail-oriented and focuses on mega infrastructure projects, health and organisational reforms as well as the elimination of extremism. PHOTO: PML-N MANIFESTO

It is the month of the General Elections, and all parties are busy in attempts to attract voters before the big day. Something that plays a major factor in whether voters are attracted to a political party or not is the election manifesto, as it gives the people an opportunity to become familiar with the vision and aims of political parties before they decide their vote. The Pakistan Muslim League-Nawaz (PML-N) has also unveiled its manifesto, and it seems quite a decent one, especially compared to the manifestos of the other leading political parties out there.

As PML-N is already in hot water and fighting a political survival battle after the verdict against Nawaz Sharif and Maryam Nawaz, it needed a sound and logical manifesto to highlight what will be the centre of its politics in the future. It seems that Shehbaz Sharif has come up with the manifesto alongside his team, which is significant because Shehbaz is now the face of the party and his vision will determine the survival of PML-N. More importantly, Shehbaz’s narrative focuses on developmental projects, and leaves no room for any confrontation with the powers that be.

The manifesto is detail-oriented and focuses on mega infrastructure projects, health and organisational reforms, as well as the elimination of extremism. Since PML-N has been able to deliver a few infrastructure projects in the province of Punjab, they have highlighted all projects like the Metro Bus, the Orange Train, the network of roads, the boost in the tourism industry, the computerisation of almost all government offices in Punjab, as well as the empowerment of women and minorities.

However, there remain grounds on which PML-N was not able to deliver on their manifesto of the 2013 Elections. Over the past five years, there has been very little development in the field of education, health and the agriculture sector. Though a few good hospitals have been built by the PML-N government, most of rural Punjab remains deprived of this basic facility. Alarmingly, the clean drinking water problem has barely been addressed.

On the other hand, PML-N’s performance on bringing the economy to track has been good enough. During its tenure, PML-N was able to bring the budget deficit from 8.2% to 4.6%. Likewise, the industrial growth rate has been increased to 5.8% while the services sector to 6.4%. The inclusion of 11,000 megawatt of electricity in the national grid and the entirety of China-Pakistan Economic Corridor (CPEC), all lies under the belt of the PML-N government, and it will give the party the electoral edge it desperately needs at the moment. However, contrary to the slogans of the ruling party, it was not able to alleviate poverty, neither were the jobs created sufficient to address the unemployment issue in the country.

During its five-year stint, PML-N was unable to raise awareness regarding the climate change issue, which is worrying given the growing implications of global warming, especially the water crisis. However, in light of its failures, this time around the party is focusing more on social and environmental issues, with a particular shift towards reducing poverty.

Unlike the Pakistan Peoples Party (PPP) and the Pakistan Tehreek-e-Insaf (PTI), PML-N enjoys an edge through its track record in Punjab for the past five years. All three major parties had an equal opportunity to perform in their respective provinces, but it seems only PML-N was able to deliver the most out of the three, despite being in charge of the central province. From motorways, underpasses and bridges and projects like the Orange Line and Metro Bus Service to CPEC and delivering more electricity, their performance is visible for all to see, and is arguably the best among all other parties competing for the throne.

Both PTI and PPP are struggling to convince voters through their track record, as both parties have not added even a single megaproject under their belt in the last five years. The PTI’s ‘billion tree tsunami’ is limited to social media alone, while the 350 dams that were promised are still non-existent despite five years in Khyber-Pakhtunkhwa (K-P). The Peshawar Metro Bus Project has not been managed properly, and as a result remains incomplete as the cost of the project increases with each passing day. On the other hand, Karachi has a serious and growing water and sewage problem which remains unaddressed by the PPP government. Circumstances are worse in the interior areas of Sindh, where PPP has nothing to show for the past five years, as it has taken no steps to improve conditions in Thar or facilitate the deteriorating conditions of poor farmers.

Nevertheless, this does not mean to imply that PML-N’s performance in the last five years was flawless, or that its model of governance is impeccable. The party badly needs to focus on social and structural reforms, and its attention towards alleviation of poverty is urgently required. In spite of the need of improvement in governance and to change its priorities, PML-N still stands far ahead from its major rivals PTI and PPP, in terms of the performance.

So this leaves PML-N with an edge, as it can easily highlight its track record of development and progress, but the problem is that like always, the party has wasted time by sticking to Nawaz’s narrative. From the very beginning, Shehbaz was of the view that instead of confronting institutions, the party should focus on its progressive work and ask for votes on the basis of its performance. With Nawaz now out of the picture, it seems Shehbaz has come to PML-N’s rescue by giving a solid manifesto only highlighting what the party has managed to accomplish thus far.

Though the manifesto looks good, is it too late for PML-N to change its narrative entirely? Will Shehbaz’s performance and his vision be good enough to attract voters and to resolve the rift between the PML-N and the establishment? Only time can answer these pertinent questions.