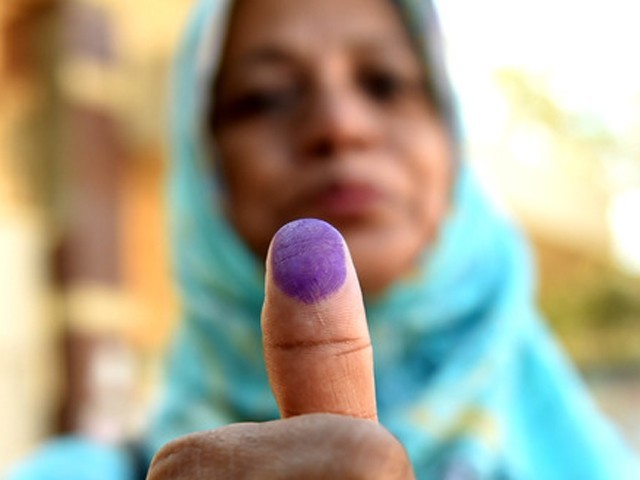 A Pakistani woman poses showing her ink marked thumb after casting her ballot at a polling station in Karachi on December 5, 2015, during local government elections. PHOTO: AFP

Brace yourself fellow Pakistanis, for tall claims, big promises, loud slogans and a lot of attention will be given to you as we approach the General Elections 2018. For five years, politicians of various parties have argued, misbehaved and abused each other on national TV to win your vote. Make sure you value that vote!

Without further ado, let me be clear where I stand with my vote; it is for Pakistan Tehreek-e-Insaf (PTI). However, the rant ahead is not an attempt to be PTI’s advocate. I am more concerned about what you vote for rather than whom you vote for.

Everyone is free to cast their vote to any party they think is best for Pakistan. Note that I said “best for Pakistan”, not yourself, not the street you live on, not the family or the province you belong to.

There is, however, a significant portion of voters that would step out in the scorching heat to cast their vote, but it won’t be for Pakistan. I’m sorry, but these are the voters I do not have respect for. Their vote is not a difference of opinion; it’s a difference in intentions. Know the difference between the two.

Following are the type of voters you will encounter in the upcoming elections:

For some, elections are not about the country but about themselves. If the party they once associated themselves with ends up winning, it somehow translates into their personal victory over fellow citizens. These types of voters will be the front line soldiers of their respective parties because an election to them is a competition.

Being on the winning side is critical and putting the country’s future in the right hands is only secondary. These types of voters will defend their party on anything and everything because for them being stubborn enough to defend what’s clearly wrong is the real victory.

If only someone could inform these voters that we are all in the same boat. A developing Pakistan is in the best interests of everybody, so choose wisely! It’s not a competition between you and me. Admitting you voted for the wrong party the previous time isn’t a defeat against anyone. Vote for what’s right not what your ego allows.

These types of voters will leave you speechless. They will be going out to vote for a particular party because their great great great grandfather had once cast the vote for this party as well. You are likely to stare and wait for them to claim it’s a joke but no. They are serious.

It’s sad and disturbing that these types of voters still exist. The Englishmen left South Asia long ago but the mental slavery has stayed with us. I for one would pray and hope my generations to follow don’t cast a vote for PTI simply because I once did. Who knows what sort of “Godfather” is leading PTI years from now. Parties change over time and so should your opinion.

3. Me first, then Pakistan

We are all selfish to some extent but putting your personal interests ahead of the country’s future is a whole new level. These types of voters can’t think beyond their street. The election season is the best time for negotiating personal favours. Those voting for the betterment of the nation are stupid to not make some favourable deals while the conditions are mint for business.

Lahore is not the entire Pakistan. Think beyond the gimmicks you earned in the city. The rest of the nation is struggling for clean water. If the drought hasn’t reached your city today, it surely will tomorrow, if we don’t bring the right leaders to power. It’s a hard request to make but can we all think beyond our households?

We all know what this is. I won’t blame these voters because this is depressing. Some go down this road because poverty has forced them to give up on this nation. These types of voters will consciously sell their vote to a particular party for some basic necessities such as free food for a day. They have waited five years for this day, would you believe it?

I aspire to live in a Pakistan where no one ever has to sell his or her vote for food. If you know someone in dire need of food, please buy them some on the day of elections so they can cast their vote more sensibly.

If possible, please don’t be this type of voter!

Finally, a portion of the voters will go out and vote for the betterment of this nation. It doesn’t matter if they cast their vote for Pakistan Muslim league-Nawaz (PML-N), Pakistan Peoples Party (PPP), PTI or any unknown individual for that matter, I appreciate them for playing a role in shaping a bright future for this country.

Neither is Imran Khan greater than life nor is PTI full of saints, but out of all the options available, I certainly believe Imran is the best choice for the nation. Having said that, I respect anyone who would vote for a different leader, as long as their thought process led him or her to believe that some other party is best for Pakistan.

Please, please be this type of voter!

Let’s put this “respect everyone’s vote” to rest because not everyone is voting for the nation. I am not going to claim respect for something I don’t actually respect. Vote for any party you want but the intentions behind it must be right.

One can’t respect a thief for looting the public because his opinions on how the society should run are different. The intention always counts!