16 years after 9/11: Its tragic memory, surreal aftermath and the insecure world it left behind 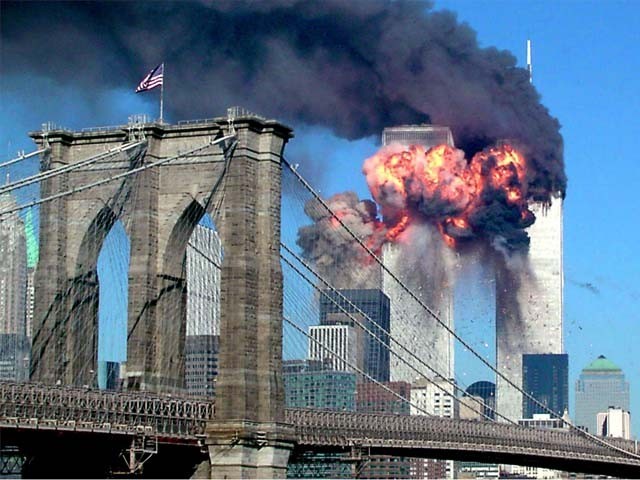 The second tower of the World Trade Center bursts into flames after being hit by a hijacked airplane in New York September 11, 2001. PHOTO: REUTERS

In 1989, when the Berlin Wall came down, young men like me who had posed as ‘Marxists’ across the 80s were overwhelmed by a sense of both sadness and dread. And yet we knew that things in our beloved Soviet Union were not quite like what we had imagined – a socialist Utopia in which the working classes (the proletariat) had risen above economic, religious and social biases to consolidate their own rule according to the noble dictates of Marxist-Leninism.

I was 22 in 1988 and about to head out to a university in Moscow on a scholarship. The plan was to study political science there for a year and then get a transfer to a university in Havana, Cuba. The education there, even for a foreign student, was free of cost as long as students were willing to work in the country’s sugarcane fields during summer and winter vacations.

To a young Marxist pretender, this was the height of socialist romanticism. But by the mid-80s, it had become rather clear even to naïve idealists such as me that the so-called socialist Utopia enacted in the once powerful Soviet Union had become a victim of its own devices.

Its economy was bankrupt, there were severe food shortage and it was stuck in an unwinnable war in Afghanistan which had taken the lives of thousands of young Soviet men. To top it all off, a cynical, amoral class of Communist party leaders and bureaucrats had become the kind of elite exploiters and oppressors which the 1917 Bolshevik Revolution had toppled.

Famous American political scientist, Francis Fakuyama, described the fall of the Berlin Wall and then the 1991 collapse of the Soviet Union as ‘the end of history.’ Indeed these dramatic falls did announce the end of the many ideological and political tussles between two superpowers (US and Soviet Union) and the ones being fought on their beck and call by dozens of smaller countries depended on the US or Soviet aid and influence.

When the wall was brought down by angry Germans, it also marked the end of the Cold War between the two giant ideologies of the period – American capitalism and Soviet communism. Some even mark 1989 as the year when the 20th century ended and a new one began to emerge.

Experts declared the advent of a new era; a new century of global capitalism monitored and navigated by the proliferation of democracy and respect for human rights. It was a fresh epoch of world peace, free trade and international economic booms – in other words, a capitalist utopia with a human touch and face.

But just as the United States and other developed countries (including emerging powers such as China) got down to make the best of what the new post-Cold War scenario was offering, many countries which had been in their orbit during the Cold War suddenly found themselves without an axis to revolve on.

Take Pakistan for instance. After Soviet troops withdrew from Afghanistan, the Pakistani state suddenly found a US which was increasingly disengaging itself from the region. Its massive aid packages, the kind which were bestowed upon reactionary dictators such as General Ziaul Haq (1977-88), became increasingly scarce, before vanishing completely in 1998 when Pakistan tested its first nuclear device.

In 1993, I interviewed late Benazir Bhutto for an English weekly. She said she was worried that hundreds of young Pakistanis who had been radicalised by the intransigent literature and funds arriving from the US and Saudi Arabia (and distributed by Pakistan) during the anti-Soviet ‘mujahideen insurgency’ in Afghanistan in the 80s, were bound to come back and haunt Pakistan.

Yet, it was during her second government (1993-96) when the country’s military establishment and her own interior minister, Naseerullah Babar, convinced her to train, fund and then impose an entirely reactionary regime in Kabul. The narrative then was that Afghanistan was now ripped apart by various warlords and that it was in Pakistan’s interest to stabilise the situation there.

This so-called stabilisation was achieved with the help of men who all branched out from various radical madrassas that were set up in Pakistan in the 80s. These were the men who imposed their writ through public executions (some by stoning), floggings and insisting on applying a most myopic and vehement strand of the Muslim faith.

This regime in Afghanistan was only recognised by Pakistan, Saudi Arabia and the UAE. It was the brainchild of strategists in Pakistan who believed they had found a valid arrangement for Pakistan in the rapidly changing post-Cold War world.

This arrangement was about maintaining a democracy in which the ‘establishment’ would have a major say and economic liberalisation – the kind which did little to boost the economy, but created brand new avenues of political and institutional corruption. It included maintaining tried and tested militant groups (and even creating new ones) so that they could now be used to dictate and look after the establishment’s interests in the region and within Pakistan.

Interestingly, just as Pakistan and the US had failed to comprehend the possible fall-outs of the Afghan civil war, neither did Saudi Arabia, which, ever since the late 60s, had dished out millions of dollars to various Islamic political parties and outfits in its attempt to stem the influence of communism, nationalism and democracy in Muslim countries.

On September 11, 2001, a group of Arab men hijacked four US planes and crashed them in four different locations in the US. Approximately 2,997 people were killed and over 6,000 were injured. Fifteen of the 19 hijackers were Saudi nationals, all radicalised and funded by the renegade Saudi billionaire and a former anti-Soviet and US-backed insurgent in Afghanistan, Osama Bin Laden. Laden had set up shop in Taliban-controlled Afghanistan, a country ravaged by 1979’s Soviet invasion and the US-funded radical insurgency. The Taliban were installed there by Pakistan in 1996.

I don’t think the 20th century ended in 1989, it ended on September 11, 2001. And the new century was not the kind of a global capitalist-democratic Utopia which men like Fukuyama had predicted. It began as a century in which, and in a rather terrifyingly surreal manner, a gung-ho and entirely muscular military response by the US against ‘targets’ in Afghanistan gave shape to the overt emergence of a new global enemy, ‘Islamic terrorism’.

It would be half-baked to suggest that this form of terrorism which then went on to slaughter thousands of innocent civilians, cops and soldiers in various Muslim countries, was born as a reaction to American military attacks in Afghanistan and then Iraq. As we have seen, the core roots of all this lies in what was transpired in Afghanistan in the 80s.

I have used the word surreal because eventually, the whole post-9/11 conflict between the US and the terrorists gave shape to a scenario in which the economic and political interests of both the US and Muslim militants, along with many other countries who had joined the conflict, became intertwined and dependent on the dynamics of this encounter.

US aid was demanded by countries by dangling extremist threats as US governments increased military funding (something which was supposed to go down after the demise of the Soviet Union). Muslim militants became the things to parade in order to gather aid, raise military funding and exhibit threats. Many of them were actually created so they could be dangled in front of donors such as US and Europe, and also within the US to collect more funding and powers from the congress.

All this infused cynicism, amorality and sheer greed within the ranks of those fighting this conflict on both sides of the pole. Militant groups became roving, violent criminal mafias and bands of mercenaries involved in kidnapping for ransom, land scams, extortion and smuggling. Confused young men and women were recruited who rationalised all this as necessary evils to eliminate bigger evils.

All the while it was innocent men, women and children who suffered – killed, maimed, displaced, threatened, chased away – all in the name of both ‘War on Terror’ as well as ‘Islam’ and ‘Shariah’.

Sixteen years after the terrible 9/11 attacks and their aftermath, the world has actually become more insecure. Countries such as Pakistan waited for militants to slaughter dozens of school children in 2014 for it to at least begin realising the sheer amorality and convoluted logic behind its policies regarding militancy. These policies were driven by the bizarre aforementioned political economy created by the post-9/11 conflict between the US and the militants.

But interestingly, just as it seems that Pakistan is now slowly but gradually trying to wriggle its way out from its entirely contradictory ‘security’ paradigm, the US, UK and Afghanistan have begun to use exactly the kind of lens which are now being discarded by Pakistan.

No country understands populism based on religious/conservative/xenophobic sentiments and rhetoric better than Pakistan (and also Iran). Thing is, even though this strand of populism now emerging in the US, UK and India just might hasten Pakistan’s retreat from its many contradictory policies regarding militancy. Pakistanis also know that such populism eventually eats away government and state institutions and eventually whole societies. Pakistan is moving left from right, while its critics after pushing it away from the right are now finding themselves almost exactly where Pakistan was till 2014.

It must be realised that whereas cold political amorality may not be the best way to fight terrorism driven by convoluted ideas of faith, it was populist propagandas and narratives based on reactionary ideas that actually caused tragedies such as 9/11.

The writer is a cultural critic and columnist. He has also authored two best-selling books on the social history of Pakistan, End of the Past and The Pakistan Anti-Hero. He tweets @NadeemfParacha (twitter.com/NadeemfParacha)