Zia ruined us, make no mistake 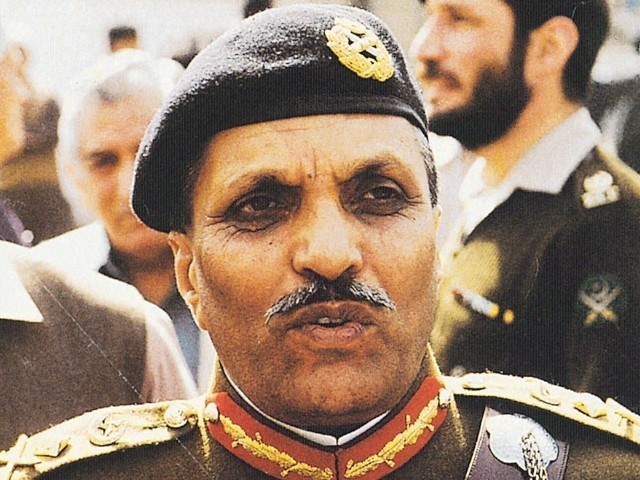 It was in Zia’s time that the seeds of the current sectarian warfare were sowed. PHOTO: FILE

‘Democracy’ is a Greek word made up of two parts; ‘Demos’ meaning ‘common people’ and ‘Kratos’ meaning ‘rule/strength’.

Democracy, by definition, is a system of governance in which the power rests in the common people and their elected representatives. One of the finest definitions of democracy was provided by Abraham Lincoln, the 16th President of the United States of America, when he said,

According to political scientists, democracy and the rule of law are primary prerequisites for a prospering country and its society. Almost all the countries considered to be ‘developed countries’ today work on the principles of democracy.

Pakistan, in the last 65 years has had its experiments with democracy as well as dictatorships. In fact, Pakistan has spent more time under dictators than under democratic governments! It has been suggested after the failures of the current democratic government that ‘democracy doesn’t work in Pakistan’ and that ‘we shouldn’t blame Zia for all our ills’.

I strongly disagree with this statement on two very different accounts.

The first one is the misdemeanours of General Ziaul Haq during his 11 years in power and the second is the statement that ‘democracy does not work’.

I shall present my case about both issues one by one.

First and foremost, let’s discuss the reign of General Ziaul Haq and the consequences of his policies during those years. When Zia took over the country on July 5, 1977, staging a coup d’état against the elected prime minister, Zulfiqar Ali Bhutto, Pakistan was facing a great deal of unrest due to political tension between the incumbent government and the opposition parties.

Zia came to power with the promise of holding ‘free and fair’ elections within 90 days of takeover. Zulfiqar Ali Bhutto, a charismatic, populist and overtly opportunistic leader of the Pakistan’s Peoples Party (PPP) had been ruling the country for approximately six years at that time.

He instilled confidence and courage in the masses, following the shameful debacle witnessed in December 1971, which divided Pakistan into two countries. After so much time in power, his actions had turned a lot of friends into foes and his heavy-handed tactics against the dissenters and former friends alike are well-documented.

When Zia took over in 1977, he used religion as a tool to oppress people and to punish anyone who dared to speak against him. It was during his reign that hundreds of people including journalists were publicly lashed. It was on his instructions that the Hudood Laws were formulated.

According to Syed Afzal Haider, a senior Judge, Dr Maaruf Dawalibi, head of the Muslim World League was specially invited by Zia to prepare the draft of Hudood Ordinance. Zia declared that the Shariat court could challenge any law in Pakistan except any martial law regulations or orders.

In 1984, University Grants Commission instructed the textbook boards to prepare books which showed that ‘Pakistan was not formed on basis on race,language or geography but based on a common religious experience’. Students should be told about ‘Ideology of Pakistan’ and then it should be popularised via slogans. They should be guided about the true pathway for Pakistan and that is the formation of a ‘True Islamic State’.

It is worth mentioning here that the first time the words ‘Ideology of Pakistan’ are mentioned in the historical records are in 1962 and were uttered by a representative of the Jamaat-e-Islami. No mention of these words has been found to date in either the official Jinnah Papers or the All India Muslim League papers.

It was in Zia’s time that the seeds of the current sectarian warfare were sowed, starting in 1986 with the massacre in Kurram Agency and formation of the Sipah Sahaba in Jhang. Even though  Zia professed his love for Islam, he was involved in the massacre of innocent Palestinians during the Black September Tragedy of 1970, while he was serving in Jordan.

It was in Zia’s time that the oath of the Pakistan Army inductees was amended and it was added that they ought to defend not only the geographical but also the ‘ideological boundaries’ of Pakistan. Zia detested politicians and political parties. That is why the only elections that were ever held during his time, in 1985, were ‘party-less’ elections.

A lot of what is wrong with Pakistan today can be traced back to Zia and his era but it should not be forgotten that Pakistan was not exactly a haven before him. Since 1947, we have been mired in difficulties and problems of varying kinds. Zia only augmented the ideological and political mistakes earlier made by both elected politicians and generals.

The first ‘proper’ national elections were held in 1970, a whopping 23 years after the formation of Pakistan!

Similarly, the longest period that democratic governments were allowed in power was 11 years (between 1988 and 1999). Democracy does not work like that. Major political parties in Pakistan do not hold regular party elections, thus they are not exactly beacons of hope regarding the democracy experiment.

Democracy works if there are regular internal and national level elections and people take into account that their votes matter. None of that has happened in Pakistan. Similarly, abiding by the rule of law is essential for a democratic Pakistan, as it prevents any extra-constitutional attempts at thwarting democracy. Unfortunately, this has not been the case and thus, we are reaping what we ourselves have sowed.

Lastly, it should be emphasised that democracy is not the solution to all our problems. Democracy is not the even a ‘perfect or ideal’ system, but we do not live in an ideal world. There are many other factors necessary for democracy to work. Patience is the most important one of them.