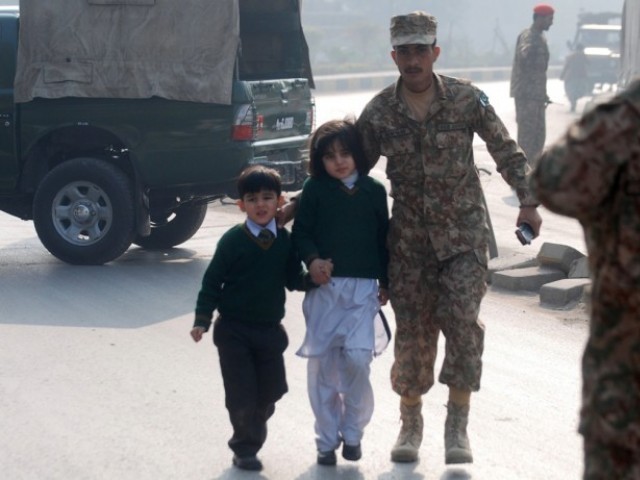 A soldier escorts school children after they were rescued from the Army Public School. PHOTO: REUTERS

This morning, as I opened my social media newsfeed, I was left completely mortified. At around 11.45 am, news about five to six militants who had carried out an attack at the Army Public School (APS) in Peshawar was all over my newsfeed.

Alarm bells started going off in my head.

I have friends whose children go to that school.

Immediately, I thought of ringing them up. But then I stopped. A thousand thoughts went through my head in those few seconds – what if they didn’t know about the attack just yet? Would I be causing panic? What if I clog up the phone lines and someone else has something more important about their kids to tell them? Would I want my friends calling me at that point? It wasn’t until I opened my TV to see the harrowing images of injured children being carried to hospitals and, unable to hold myself back any longer, I finally called one of my friends. She, a mother of two children who go to the same school, was quivering as she wept asking me to pray for her children. I didn’t have the courage to call anyone else after I shut her phone.

By 12:10pm, Tehreek-e-Taliban Pakistan (TTP) claimed responsibility for the attack. The Express Tribune received the following statement from Omar Khorasani, a spokesperson of TTP,

“Our people successfully entered the Army school in Peshawar this morning. We are giving them direct instructions to not harm minors”. He added, “Operation Zarb-e-Azb and Operation Khyber–I forced us to take such an extreme step.”

More information from other news agencies reported that the TTP said that they are still able to carry out major attacks and this was just a trailer. TTP also warned the army to stop releasing statements which comprised of fabricated number of militants killed when the actual number according to the TTP is far less. Then, the TTP spokesperson added that they are targeting only older students, ‘sparing’ the younger ones.

The older students at APS are between the ages of 10 to 16-years-old. One of the injured children who were being interviewed by ARY said that the militants initially selected the students and then pulled another out to shoot their own classmate.

Can anyone imagine the scar that has been left on this child? Pulling out students to shoot them? What sort of barbarianism is this? Which religion permits such brutality?

By 1.30pm, Nawaz Sharif including other party heads had condemned the attack. A state of emergency was declared in surrounding hospitals. The security at the hospitals was reportedly beefed up.

What comes as complete surprise to me was the irresponsibility shown by people, not only on social media but also by the news reports that poured in the figures of causalities as though they were mere numbers and not children. Without confirmed reports, information was being thrown across social platforms and news channels without any accountability. These children, who were under attack this morning, all belong to some family that was reading your tweets, your Facebook statuses and watching the news helplessly all the while praying that the child you were talking about was not their son or daughter.

Where were our media ethics?

What if it was one of your own children soaked in blood that you just happened to glimpse on the TV screen?

Over 100 children were killed in Peshawar this morning. Today, as history marks the Fall of Dhaka, our present marks the end of humanity. We live in a world where animals are better than humans. A world where innocent children are killed mercilessly. Today is one of the most unspeakable and surely the darkest days in our history, in the history of mankind. Today we stooped as low as to kill helpless innocent children.

That child could have been mine. With an exceedingly heavy heart and a throat choked up on tears, I extend my condolences to all those people who lost their loved ones, their children in this incident today. And for all those who support the Taliban and are their apologists, God damn you to the deepest pits of hell. Leave us alone! Leave our children alone! Don’t for a moment think that only Peshawar bleeds today, because on this atrocious day, Pakistan bleeds. On this day, humanity bleeds.