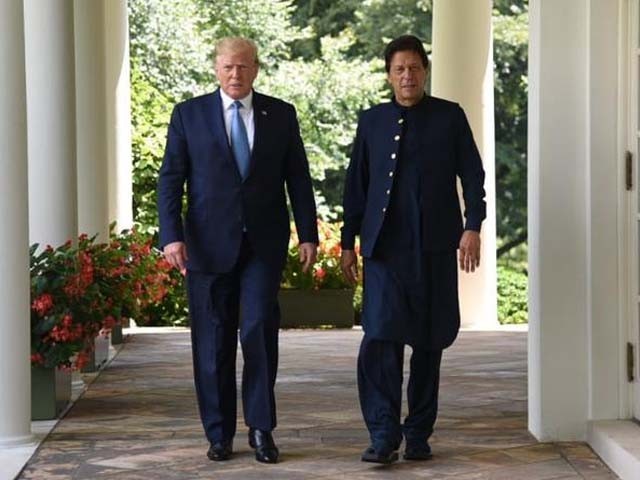 If Imran plays his cards right, chances are we might get lucky and see a new era of Pakistan-US relations. PHOTO: TWITTER/ PTI

Here’s the good news – Imran Khan and Donald Trump’s face-to-face meeting was cordial, to say the least. There was no bromance or physical gestures of affection, which Imran’s Indian counterpart is known for, but all in all, not a bad first step towards normalising relations between the two countries.

Considering what happened in November last year – i.e. the Twitter fireworks that essentially tore apart any hope or chances of rapprochement or reconciliation – other than showing a few signs of nervousness, Imran handled the most unpredictable character ever to grace the halls of the White House pretty well!

In the briefing @realDonaldTrump recognizes kashmir as a dispute that needs resolution, says Pakistan is a great country , recognizes the constructive Pak role in Afghanistan, calls @ImranKhanPTI a strong & popular leader…. All in all great messaging from Pak perspective

The recognition of the fact that Pakistan will play the main role in Afghan peace process & President Trump's offer to mediate Kashmir crisis are two bold statements that show the tremendous achievements of PM Imran Khan's diplomacy. Pakistan is on the rise!#KhanMeetsTrump pic.twitter.com/I4C63PjWjx

One could feel some sparks flying between Trump and Imran. After all, they are both celebrities and nationalists, and they both came to power in their respective countries on the basis of sheer rhetoric.

However, before Imran’s supporters take to the streets with the chants of ‘Naya Pakistan,’ a word of caution for the gullible. Despite all the talk of resetting or rebooting the relationship, let’s not get carried away. Yes, Trump was cordial and forthcoming during the meeting and he even offered to mediate or arbitrate (he interchangeably used the words since he doesn’t have any clue about the difference between the two) on the issue of Kashmir (sounded like he liked the word Kashmir!) – something that no other American president has committed to do in the past. Nonetheless, we are still miles and miles away from establishing any kind of stability and trust in terms of making the Pakistan-America relationship blossom again.

According to Trump, India's Prime Minister Modi "actually said, 'Would you like to be a mediator or arbitrator?' I said 'Where?' He said, 'Kashmir.'"

India's official spokesman just issued statement saying: "No such request has been made by Prime Minister to the US President." pic.twitter.com/ivjhGwDHT2

Before a reset or a reboot is performed, Pakistan has to unplug itself from the part of its past that has turned its relationship with Washington into a farce. The United States (US) has repeatedly accused Islamabad of harbouring terrorists and terror financing. Through the American lens, Pakistan is also looked at in an unfavourable light because of its treatment of minorities, human rights abuses, and for being too close to Saudi Arabia.

The reality is that Washington needs Pakistan at this moment in time. This particular Imran-Trump meeting transpired because the US wants Pakistan to play a pivotal role in negotiating with the Taliban. The US knows that they can’t keep sitting in Afghanistan forever. Trump has pledged time and again that he wants to pull his forces out of Afghanistan. However, they can’t just pull out abruptly and leave. That’s where Pakistan comes into the picture. They can leverage their links and ties with the Taliban leadership to create prospects of peace, thereby ensuring a US troop pullout. While one doesn’t know the context of Trump’s statement yesterday, that he can annihilate Afghanistan in 10 days, it is a recognised fact that yet another war effort by the US in that part of the world will be nothing less than political suicide for the country’s leadership.

On the other hand, a cash-strapped Pakistan needs US support not only for seeking assistance to counter the pressure from the World Bank and the International Monetary Fund (IMF), but also getting back into America’s good books can perhaps open new doors of opportunity vis-à-vis business and trade. If Pakistan treads the Afghan situation carefully and smartly, and delivers what Washington wants it to do, there are bright chances of a revival of fortunes.

But it won’t be easy to gain any concessions from Washington. Islamabad will need to come clean on several counts. Observers in the US believe that Trump’s promises aside, issues such as human rights, harbouring of terrorists like Hafiz Saeed, and the release of Dr Shakil Afridi, are the most significant impediments in the way of a potential political détente. Trump can only make promises but unless he takes a personal interest, like he’s doing with respect to North Korea, there’s no way that Washington would help Pakistan overcome its economic woes. Legally speaking, there are plenty of obstacles and hurdles that would need to be overcome, including the US Congress, before one starts seeing actual results.

One last thing: Pakistan is not India and hence doesn’t have a clout in the US economic and political ecosystems. The sincerity of Pakistan’s purpose is the key here and Imran will need to lead from the front if he wants this meeting to materialise into something bigger than a mere photoshoot.

In the absence of a focused and solid follow-through, this will be remembered as yet another Trump dog and pony show. To eliminate the possibility of such an eventuality, folks at the Foreign Office, and especially the Pakistan embassy staff in Washington, can play a critical role in promoting an image of a country that is ready to make appropriate changes and adjustments in light of the changed circumstances. Islamabad must show the world that it means business and wants friendly and peaceful relations with its neighbours. There are no two ways about it.

Looking beyond this meeting, the eyes of policy makers will be glued on how Pakistan strategises and facilitates US-Taliban dialogue and settlement. Who knows, in Imran, America might have found an honest broker who can work along with the deal-maker, Trump, and revive the flagging fortunes of his country. Both countries need each other, and this could be a God-sent opportunity for Pakistan to take advantage of this new challenge that the Trump administration has come up with of wanting to achieve peace in Afghanistan.

We all know that Trump is pretty much a one-man show. If Imran plays his cards right and both leaders stand by the commitments they have made, chances are we might get lucky and see a new era of Pakistan-US relations.

Furthermore, the overarching reality remains that despite all that has happened in the past, it is still in Pakistan’s benefit to work closely with the US. Islamabad must co-operate, gain their trust, and stay on the right side of the world’s largest economy. The people of Pakistan are tottering under economic pressure, desperately in need of some relief and Imran could provide it for them. However, he should be ready to walk down a long, arduous road in his now celebrated Peshawari sandals!