Is Imran Khan the Donald Trump of Pakistan? 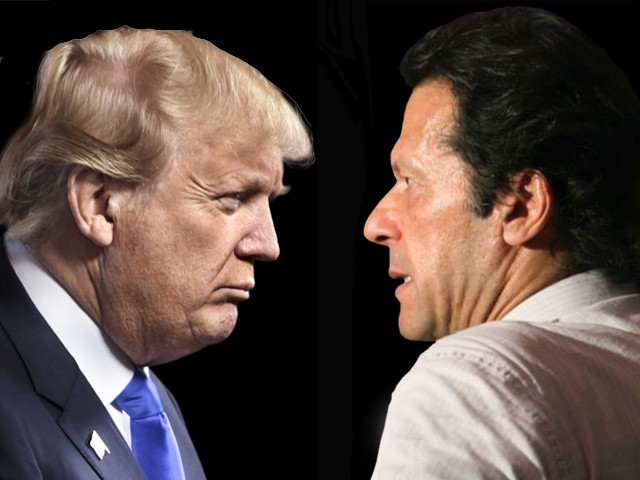 If you were to look back and think of one of the most unbelievable decisions made in the past five years, Donald Trump getting elected as President of the United States would perhaps top the list. Just imagining the “strongest” democracy in the world actually handing over its reigns to the man without a plan makes you feel a little bit better about the state of your own democracy. You think, maybe America is worse than us, for what sane mind would ever vote Trump into power?

Well, all this thinking made us wonder, who is Trump’s equivalent in our own political sphere? Though perhaps many of our politicians are eligible for this comparison, recent events bring only one person in mind – our very own “King Khan” (or if Reham Khan’s allegations are to be believed, perhaps Kink Khan is more apt?)

Now, before we are immediately bashed in the comments, we’d like to explain why we’re making such a heavy comparison when it comes to the sadiq and ameen (honest and truthful) politician. Leadership comparisons will of course be flawed – after all, Trump is the leader of the free world, and Imran Khan isn’t even the elected leader of our own country (yet).

No, the following comparison is simply based on how two leaders play the game of politics, the extent they are ready to go to in their pandering, and how ardently their supporters are willing to believe every word that comes out of their leader’s mouth.

At the baseline, both Trump and Imran are rich celebrity personalities who felt their presence was needed in the political sphere. Giving Imran some credit here, his athletic achievements have always been more remarkable, as we’re not quite sure what (if anything) Trump has ever achieved.

Trump’s call to “Make America Great Again” resonated with white folks who felt eight years under Barack Obama had somehow ruined the country in a way that only a politically inexperienced reality celebrity could fix. Similarly, Imran’s Naya Pakistan reached out to the youth disenfranchised by the Pakistan of old. The attainability of each slogan aside, one can’t deny they are semantically similar and work the same way to simply gain devoted followers who will throw the slogan back at you every chance they get.

3. Pandering to the right

Both Trump and Imran have been pledged support by the extreme right of both countries. While Trump has often had a kind word or two to say about literal Nazis in America, Imran has said the same but for their equivalent in Pakistan – the religious right-wing. Despite counting on liberals to vote for him, Imran has verbally insulted the group repeatedly (khooni liberal scums, anyone?) in favour of praising and joining hands with right-wing groups, especially during his election campaign. After all, he didn’t earn the name Taliban Khan for nothing.

This is Maulana Samiul Haq, the father of Taliban, explaining his partnership with Imran Khan's #PTI. Dont forget that Mr. Khan while talking to @TheZeinabBadawi in @BBCHARDtalk said how inspired he was by Taliban justice system.#Pakistan pic.twitter.com/Lg7pLw148I

You can’t blame Imran, just as you can’t blame Trump; after all, both men have simply done whatever it takes to win. Yes, a lot of PTI supporters argue Imran is doing whatever it takes to garner votes and that once he comes into power, he will go back to his “Naya Pakistan” self. But dialling back a little into history reveals that people who voted for Trump did not think he would follow through on the problematic promises. However, immigrant families separated on American soil would perhaps tell them otherwise.

Even though Trump is the “least racist person you’ll ever meet”, he’s quite overtly racist. And Imran has, on multiple occasions, proved that so is he.

Anyone remember the last Pakistan Super League? Cricket had finally come home and everyone was celebrating the victory, as Pakistanis should – except Imran. In a press conference, he addressed the international players who came to Pakistan as phateechar. He also said,

“I don’t know any of these foreign players, I have not even heard their names – the government seems to have grabbed someone from Africa and said look it is a foreign player.”

Does Imran identify with the colonisers more than the colonised? After all, he saw the colour of their skin and his instinct was – if it ain’t white, it ain’t right!

5. Sexism comes naturally to both

No one needs to elaborate on why Trump is sexist; the proof is well documented for the world to see. But is Imran a more subtle form of sexist?

Like most men in Pakistan, Imran’s hate for feminism blooms in an already misogynist society. Recently, in an interview, he suggested he hates feminism for degrading the role of motherhood. Now, this could easily be brushed off saying this is just his ignorance on issues pertaining to women. But a well-educated and “woke” individual like him should know better.

Moreover, opposing the Protection of Women Against Violence Bill is not ignorance.

Whether he chose to do this to please the right-wingers or he really does not care about women’s rights, we’re not sure – all we know is, at the end of the day, he threw every Pakistani woman under the bus.

If Imran Khan thinks motherhood is the most cherished and valuable role for women, maybe PTI could’ve worked to make life better for mothers and not opposed the 2016 Protection Against Domestic Violence Bill so much.

6. The choice of language

Something that made Trump fun to watch (in a horrifying way) during his election campaign was his language. “Lyin Ted”, “Crooked Hillary”; you have to admit, the man had a knack for calling people names.

Similarly, Imran took our elections to the next level with his “colourful” choice of words, including insulting supporters of a particular party directly. From calling Karachiites zinda laashain (living corpses) to calling Pakistan Muslim League-Nawaz (PML-N) supporters “ghadday” (donkeys), Imran has insulted his way to the top.

It’s hard to forget Trump’s inauguration speech, where people quickly noticed that the crowd size was too thin compared to what it was under President Obama. His team quickly responded to clarify that it was indeed the biggest crowd anyone had ever seen. While the only proof the world needed to verify those claims was eyes, something similar has been happening of late at PTI rallies.

Crowd at PTI rally reported to stretch from Islamabad all the way to Clifton Beach in Karachi. At least 4 trillion. pic.twitter.com/K3tlttmMM9

PTI rally crowd estimates according to

Social media has been rife with pictures suggesting PTI rallies have been alarmingly vacant as of late, while supporters are quick to dispute the visuals being shared on social media.

It is easy for us to see how problematic Trump is because we aren’t his followers; we would never vote for him. But when you ask Trumpers who put their trust and faith in this man, they would probably say he is the best thing to happen to America.

Similarly, for better or for worse, one thing that can be said about PTI supporters is that they are quite adamant when it comes to their side, and will subtweet you for all eternity to try and justify the latest faux pas of their beloved leader.

Amazing how @Quratulainb has outraged Youthias. The same ppl who abuse & curse every living/non-living thing on the damn planet that disagrees with Imran Khan have unleashed the kraken on QB for just calling him out on sexual harassment allegations. Bizarre & disturbing.

Trump had Fire and Fury revealing just how insane the White House was under Trump, and we had Reham Khan detailing just how strange some of Imran’s inclinations are. Both books raised huge question marks regarding their own credibility, but while we take all claims with a grain of salt, there is no doubt both controversies provided a lot of fodder for entertainment at an international scale.

For Trump, Obama is the cause of every single ill in the world. North Korea developing nuclear arms? Blame Obama. The elections were rigged in Trumps’ favour? Blame Obama. We bet if a fan stopped working in the White House, Trump would type out an angry tweet blaming Obama.

On the other hand, while Imran has many justified reasons to blame Nawaz Sharif for the actual ills plaguing this country, sometimes he takes it to an extent that can be classified as reaching, especially when all he has to offer are conspiracy theories. This nation loves conspiracy theories, which is perhaps why Imran should refrain from claiming foreign involvement every chance he gets, unless he has actual proof to back his claims up.

Beginning to wonder why whenever Nawaz Sharif is in trouble, there is increasing tension along Pakistan's borders and a rise in terrorist acts? Is it a mere coincidence?

Nawaz sharif talks of Khalai makhlook? There is Ghair Mulki makhlook with them. I also want peace with India but not at the expense of the atrocities in Kashmir.@ImranKhanPTI #TabdeeliLahoreSe

Another trend the world owes to Trump is the widespread prevalence of the term ‘fake news’. Made-up facts forwarded to you on Whatsapp and shared on your Facebook is where real news is at now. The media actually doing its job, doing research and reporting everything going wrong in politics? That’s all fake news. Especially if it’s the New York Times, one of the most respected publications in the world, which is most certainly a fake paper according to Trump.

On the other hand, Imran has recently made his own ‘fake news’ claim against Pakistan’s first English publication that was founded by Muhammad Ali Jinnah himself, accusing it of bias, despite most papers largely reporting facts where it concerns him and his party.

The blatant bias of Dawn against PTI has now come out in the open. So much for Dawn's neutral and liberal credentials! Complete farce! Full marks to Stevan Sackur for exposing Dawn in his BBC HardTalk interview.

Imran Khan attacks DAWN newspaper in Karachi 4 promoting 'foreign narrative' but in the same speech quotes a survey by Herald (a Dawn publication) as credible finding on KP. Anyone who disagrees with IK is called foreign agent/corrupt by IK/PTI and DAWN Is the latest casualty

Where Trump was deemed to be running the country on Twitter, Imran has been dubbed the Prime Minister of Facebook. Both of them rely heavily on conspiracy theories and will accept anything written in their favour and be quick to deny if it isn’t, despite the source’s credibility or lack thereof.

Is Imran as bad as Trump? For all our sakes, we hope not. Yet both shared enough factors in common for this article to practically write itself.

We hope if (read: when) Imran comes into power, he gives us all a Naya Pakistan where tulips bloom in winter and all our miseries are a thing of the past. Realistically speaking, however, we’re all in for an interesting five years where, as in the past, none of what was promised is likely to be delivered.