Will Donald Trump and Kim Jong Un finally take their thumbs off the nuclear button? 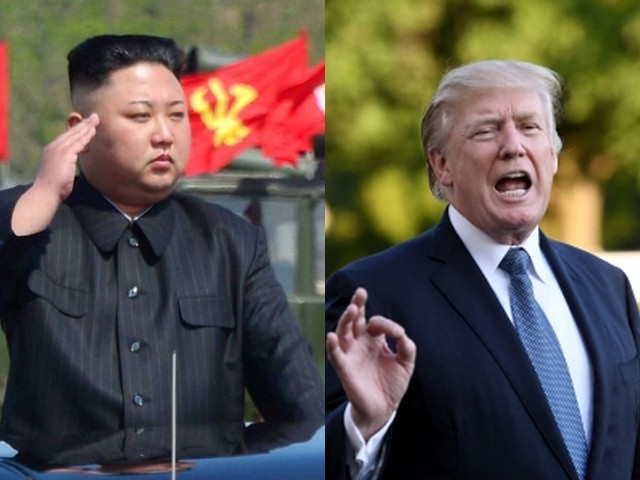 What is behind Trump’s intentions of meeting with Kim, and why now, at this particular juncture in history?

Much of the world is still coming to grips with the news that US President Donald Trump has agreed to meet with leader of the Democratic People’s Republic of Korea (DPRK), Kim Jong Un. Fortune described the news as being “nothing short of a miracle”, which aptly describes how the rest of us, who do not want a nuclear holocaust, feel.

That being said, it must be asked, what is behind Trump’s intention of meeting with Kim, and why now, at this particular juncture in history?

It wasn’t too long ago that reports were emerging that the US was secretly considering a direct military strike on North Korea, similar to that of Trump’s decision to strike a Syrian government airbase in April of last year.

The mainstream media has attempted to present Trump’s violations of the international law and incessant threats of “fire and fury” against the North Korean state as being the real driving force between this “miracle.” In reality, what has probably spurred this process on is the newfound sense of diplomacy offered by the South Korean leadership.

It also pays to remind that North Korea is not as completely isolated on the world stage as most people tend to think. Despite Washington’s crippling sanctions regime, both Russia and China, two nuclear powers, have continued to assist the North Korean state from facing a total economic collapse. In other words, North Korea can agree to meet with Trump and be secured with the knowledge that should anything go awry, Russia and China may most likely be there by North Korea’s side.

So, how likely is diplomacy actually going to be achieved, as long as Trump is in office? Bear in mind that the George W Bush and Barack Obama administrations also maintained a hostile policy towards North Korea. It should be clear that opposing and belittling North Korea is an official US policy, not just the crazy ramblings of a former reality TV star with nothing better to do. It should also be clear that this longstanding aggressive policy towards North Korea never actually successfully brought North Korea to dialogue in the past. Hence, pretending that Trump’s strategy alone is the reason behind this “miracle” is nothing short of a lie.

In order for there to be real progress on the North Korean issue, two major things need to be achieved. Without these two steps, no deal can be reached on the North Korean nuclear program, and a military strike may be the next step for Trump’s hawkish administration.

One, the United States will insist that North Korea must agree to completely freeze its nuclear program. On the other hand, the US must halt its provocative military drills and withdraw its troops and bombers from the North Korean border, in order for North Korea to even entertain the first requirement.

This is not conjecture, as we have come to learn from listening to the North Koreans themselves, and as can be found in a North Korean statement from July last year:

“DPRK would neither put its nukes and ballistic rockets on the table of negotiations in any case nor flinch even an inch from the road of bolstering the nuclear force chosen by itself, unless the US hostile policy and nuclear threat to the DPRK are definitely terminated.”

The New York Times also reported that the “Libyan crisis is teaching the international community a grave lesson,” which was that Libya’s decision to abandon its weapons programs in 2003, applauded by Bush, had been “an invasion tactic to disarm the country” – according to North Korea’s Foreign Ministry.

In other words, if the North has no guarantee that dismantling its nuclear program will not lead to a full-blown invasion, a deal with North Korea is meaningless.

The media is currently reporting that Trump is actually threatening to withdraw American troops from South Korea if he does not get his way with Seoul. However, the truth is that all this shows about Trump’s erratic behaviour is that he believes he can threaten other countries in order for things to be done the way he wants. The likelihood that the US would ever withdraw from the Korean peninsula is close to zero, and has been the reason why the US has never reached any peaceful agreement with North Korea to date.

Indeed, in the early 50s, the US relentlessly bombed the North, destroying over 8,700 factories, 5,000 schools, 1,000 hospitals, 600,000 homes, before eventually killing off as much as 20% of the country’s population. As the Asia Pacific Journal has noted, the US bombed the future North Korean state so heavily that they eventually ran out of targets to hit.

Ordinary Americans may have forgotten this recent history, but the people of North Korea haven’t. As Fortune’s Christine Ahn notes, for the North Koreans, steps towards pursuing denuclearisation have “always been about trying to secure a guarantee to merely exist”.

Any potential dialogue between the US and North Korea must take all of this into account or it is, by all accounts, a complete farce, and we should be prepared for Trump’s Plan B.