#TherapistDiaries: Old age and the game of betrayal 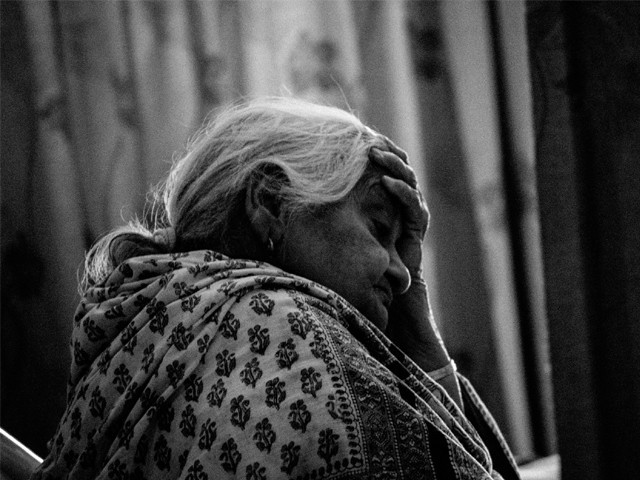 The powerlessness over their bodies involves them in a constant psychological worry that something terrible is going to happen.PHOTO: PINTEREST

The mere sight of my dad’s shivering hand gives me heartbreak. He has crossed 60, and hence the strength of his body keeps drifting away every once in a while. My mom, in her 50s, struggles with circadian rhythms due to her increasing age. Her screen time – YouTube and Facebook mainly – has increased in the past five years. She bonds with us and her friends over puppy videos and babies-gone-funny posts.

There is an innate air of sadness about old age.

We are powerless creatures in a number of ways. It is both, our infancy period and old age that define the helplessness in terms of our body. Especially in old age does the betrayal game from our own organs and body start coming as a shock. The thought of losing control over one’s body is enough to make one feel a limitation about their existence.

Masood Sahab*, a senior in his 60s, struggled with the shock of being betrayed by his own body. He had a loving family and ample of caregivers around him who showered him with sufficient attention. He had a smooth career and took pride in the fact that he had contributed towards society as well. But once he crossed his 50s, his body started to “betray him”. Sometimes an arm would simply refuse to bend, other times he would get uncontrollable shivers. Unexpected viruses, the rare types, would visit. Food he had consumed throughout his life was suddenly refused by his bowels. He could not understand.

“I feel like my body is protesting, giving a dharna of sorts.”

Similarly, Mrs Shabana*, an elderly woman in her 70s, could not understand why her body didn’t love her back.

“I have always taken great care of my body.”

Her daughter-in-law of the last 25 years was sort of a witness to the situation.

“Even teenage girls don’t care for their bodies the way ammi did. It is difficult to get ammi to terms with her aging.”

Mrs Shabana, unlike Masood Sahab, wasn’t in any sort of shock. She was in denial. She refused to age and had unrealistic expectations with her body.

It is these kinds of experiences with their bodies that often put the elderly on the spectrum for Somatic Symptom Disorders. The spectrum describes disorders such as Illness Anxiety Disorder, commonly known as hypochondria, a constant fear of acquiring or having a disease otherwise refuted by medical evidence; or Conversion Disorder, which includes sensory symptoms not explained by medical evidence.

The powerlessness over their bodies involves them in this constant psychological worry that something terrible is going to happen or is already happening to their bodies. The belief often leads to feelings of deep depression.

Apart from the anxiety about their bodies, the elderly also struggle with feelings of despair, loneliness and depression, particularly when they are left with no caregivers. However, there isn’t a causal relationship between the absence of caregivers and depression.

Unresolved traumas and grief from their middle age also come to haunt the elderly in the form of depression and anxiety, regardless of the number of caregivers.

A majority of the elderly people I have encountered battle with unresolved grief from the past, while the transition towards old age is difficult for them. Both of these factors combine to cause depression at this age.

I remember a patient of mine in her 80s. She belonged to a very affluent family and had the most amazing daughters-in-law and children (I often went to conduct home sessions). One of the daughters-in-law even had a decade’s experience of working at an old age home in the US and took perfect care of her mother-in-law. Despite this, she felt terribly depressed; so much so that she used to howl and cry because of the emotional pain depression gave her. No medication was helping her either. She could not even hear properly, so I had a very limited chance of counselling her and getting my word through.

The best way to counsel or help an elderly person with psychological issues is to help them resolve their past grief. Helping them understand the transition towards old age helps as well. This involves a briefing on expectations from one’s body.

Finally, the most effective ways include a constant caregiver to cater to the feelings of loneliness and asocialisation. Setting up short goals for each day in advance is an excellent strategy so that the elderly can look forward to starting a new day.

It is extremely difficult for an elderly person to come to terms with all sorts of emotional, physical and environmental transitions. All their lives, like any other human being, they mastered the art of control over their bodies, minds and emotions. It comes not only as a shock, but as a loss as well. Thus, while treating the elderly or working with them in any capacity, we need to understand this and keep it in mind.

We, as families, strangers or professionals, often feel that the elderly are stubborn, attention seekers, unhygienic or rude, and in feeling so we justify our harshness and hostility towards them. We justify making them a subject of our jokes with respect to how they love popping pills and visiting different doctors. We dismiss their concerns or complaints of discomfort as routine.

It is fine to not be able to find yourself in a very caring spot for the elderly. If you can’t be fair to them, then I plead with you to consult the services of a counsellor or therapist for them. Let them march towards the end with as less burden as they can.