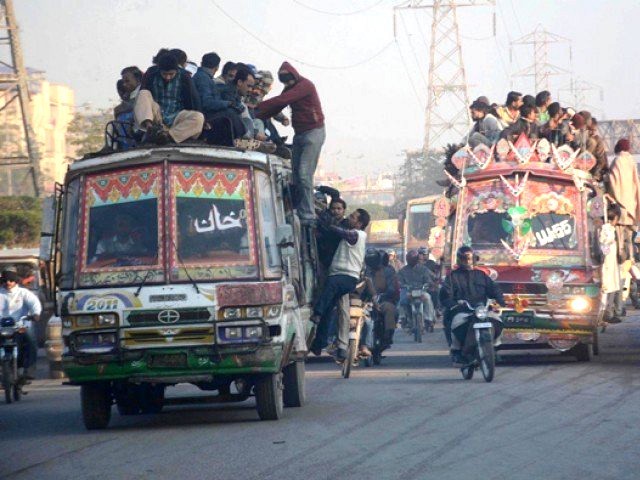 Commuters pay a significant amount of their income because of continuous increase in the cost of CNG. PHOTO: FILE

Spread over an area of 3,780 square kilometres, Karachi is one of the largest cities of Pakistan. Shockingly, commuting is a major issue in the city due to the absence of a government-owned public transport system.

As a regular commuter, I often have to wait for the bus for more than half an hour, especially on Compressed Natural Gas (CNG) strike days. Moreover, I often have to stand in the bus throughout the 45-minute journey to my university due to unavailability of seats, which numerous other daily commuters including labourers and office workers have to endure as well.

Often, as I anxiously wait for buses at various points including bus stops, I have witnessed overloaded buses passing by without stopping to pick more passengers. During peak hours, the ladies compartment – which comprises of eight seats in buses and 11 congested seats in mini-buses and coaches, all situated near the driver’s seat – is also occupied by men.

One of the seats allotted for ladies is situated too close to the driver’s seat, which I and most women often hesitate to occupy. My efficiency also deteriorates due to a daily exhaustive commute to the university.

From diesel to CNG

In 2003, General (retd) Pervez Musharraf introduced CNG as an alternative fuel for vehicles as buses were running on diesel. Initially, CNG cylinders were placed in ladies’ compartment in public buses. Hence, not considering the possibility of them exploding, women’s lives were put at risk. This continued for a few years until the cylinders were properly installed in appropriate places.

Moreover, commuters pay a significant amount of their income because of continuous increase in the cost of CNG. It has gradually increased since 2003 from Rs17.5 per kilogram to Rs104 per kilogram in 2018. A record hike in fuel prices was observed in October 2018. Private transporters fixed the bus fare at five rupees per 12 kilometre in 2003 which has now increased to Rs25 for the same distance.

I have witnessed constant arguments between commuters and bus conductors over hike in fares. Photostat copies of notices approved by private transport authorities mentioning hike in fares are pasted in buses. Drivers and conductors refer to the pasted document whereas the commuters demand an official government notification.

Another issue is non-availability of CNG three days a week – Monday, Wednesday and Friday. In winters especially, the supply of CNG to stations is frequently interrupted due to high demand as it is used by 85% of public buses in Karachi. During a CNG strike, most of these buses are not operative and hence the remaining have to bear the excess load. According to Ali, a public bus driver, the earnings through fares almost doubles when a CNG strike extends to more than a day.

Sindh government and the rising competition

During PPP’s federal government tenure, from 2008-2013, Qingqi motorcycles and rickshaws were introduced in Sindh as another means of public transport. These new vehicles were five and eight-seaters, and provided speedy transport to the public.

However, qingqi motorcycles and rickshaws have deteriorated the outlook of the mega city. In the absence of proper terminals, the vehicles are parked at various unauthorised places. Qingqis stop anywhere to pick commuters, making lives difficult for people driving on roads. They also create hurdles for pedestrians, constantly annoying them by asking whether they want to take a qingqi instead.

Since 1962, a private association, now known as KTI, has been providing travelling services to the residents of the city via buses, mini-buses and coaches. Syed Irshad Hussain Shah Bukhari, president of KTI, has been in the business of public transport for 56 years. He has seen various governments including military rule in Pakistan and considers Musharraf’s era the best for public transport in Karachi as transporters were able to save money once the conversion of fuel from diesel to CNG was implemented, since the latter was comparatively cheaper than the former.

Qingqi motorcycles and rickshaws severely affected privately-owned buses operating under KTI. The transporter had to reduce the number of buses due to the declining number of travellers because they opted for the new speedy transport system on qingqis. In 2008-09, KTI had a total of 25,000 vehicles which included 5,000 buses, 10,000 mini-buses and 10,000 coaches. Today KTI is left with less than one-third of the vehicles it owned in 2008, which includes 2,000 buses, 2,500 mini-buses and 2,500 coaches. Lack of buses is one of the primary reasons that public buses are usually overloaded.

During PPP’s 2013-2018 tenure in Sindh, transport minister Nasir Hussain Shah tried to address the issue of lack of public transport in Karachi. He had a meeting with Bukhari and other transport providers in Sindh.

“The government wanted to run 600 buses in Karachi on 15% advance and 85% loan provided by the Sindh Bank. Both parties agreed on the terms and conditions but the deadlock persisted on fares,” said Bukhari.

The loss of national income

The absence of government-owned public transport system results in the loss of national income, said Kaiser Bengali, a renowned economist. The reason is that more time is spent by people on commuting and less time is invested on production. Less input reduces the amount of revenue, which affects the economy.

Public transport system can be improved if government takes measures to manage the already existing private transport infrastructure more efficiently. More buses with higher passenger capacity on various routes should be introduced. Moreover, proper bus terminals should be made to avoid parking of buses at random places as a stepping stone towards building a viable public transport network in Karachi.

The author works as a sub-editor for Express Tribune’s National desk. She tweets @fatimash29 (twitter.com/fatimash29)

First the dam fund, now the ‘Lets Clean Karachi’ fund – what do we pay taxes for?