“Safe” public transport for women: He kept whispering his sexual fantasies to me as he masturbated 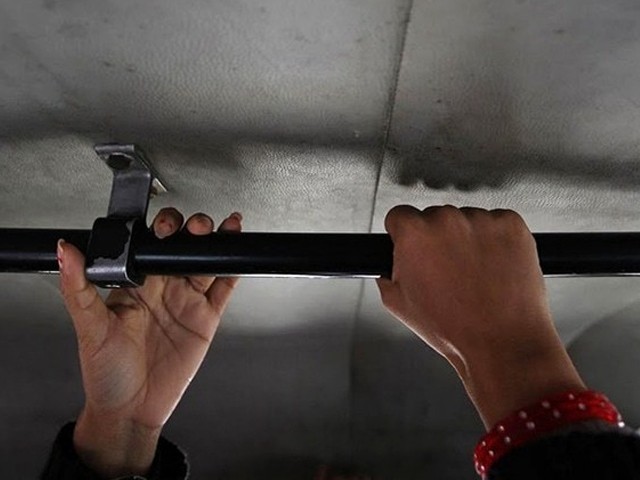 Be it by staring, groping, catcalling, or touching their genitals, men make it difficult for women to inhabit public spaces. PHOTO: REUTERS

I am a big advocate for public transport, which is not only an environment-friendly and cost-effective way of transportation, but also the best choice if you don’t want the hassle of driving yourself. However, another caveat of being a woman in Pakistan is the lack of security you feel every time you travel alone.

I happened to travel to Lahore last month for a meeting, and as I usually do, I chose a Daewoo bus for the commute. While I was at the terminal waiting for the bus, I noticed a young man sitting opposite my chair and blatantly staring at me. Feeling unwell that day, I switched my seat instead of confronting him, which is what I usually do in such situations.

As we boarded the bus, I noticed the same guy sitting near my seat, and with the bus being full, I no longer had the option of switching my seat. I was under the impression he would behave this time, and I couldn’t have been more wrong.

As the bus left the terminal and we made our way to Lahore, he picked up his cell phone and started whispering into it, pretending as if talking on the phone. Speaking in another language, he could not have known I happened to be fluent in the language and could understand him perfectly.

In actuality, he was whispering his sexual fantasies the entire time, all of which were addressed directly to me. I felt extremely uncomfortable, and not knowing what to do, I turned around and stared at him angrily, hoping he would take the hint and stop. He didn’t however, and continued to speak of his lust and frustration at seeing a woman in a public space, until his phone actually started to ring.

Unfortunately, this is not the first time I have experienced harassment, and even though after every incident I confront, make noise and register complaints, there is always a new place, new bus, new terminal and new man.

Just two years ago, I was travelling in a Daewoo from Abbottabad to Islamabad, and as I sat in the front row, I saw one of the guards come closer to the driver’s window and whisper to him about a “great piece” sitting directly in the driver’s view, for his viewing pleasure the entire journey. I heard the entire conversation, got off the bus and called the terminal manager to register my complaint. Though the manager made the guard apologise, I am confident there was no remorse in the action itself, only in getting caught.

We were heading towards T-chowk, and the roads were empty, silent and dark. Panicking at the idea no one would be there to help me if something were to go wrong, I started shouting at the driver and told him to drive faster. With my phone’s battery having died earlier, I tried to think of ways to escape.

Pulling the windows down, I started shouting at the driver to stop the car as I threatened to jump. In my mind, I was thinking of items in my possession I could use to hit him, in case the situation got worse. Luckily, we came across a police van patrolling the area, and as I waved my hand out and signalled for help, a police man asked the car to stop.

This was one of the most terrifying experiences I have ever had, and I just wanted to go home. I got out of the car, narrated what happened to the police, and asked them to get me another cab, since I was afraid of sitting in a police van as well. Sensing my fear, the police officer assured me of my safety and proceeded to drop me home.

The entire time we were stopped, the cab driver kept asking for mercy, promising this behaviour would never occur again. I told the police to not let him go, and also filed a formal complaint so he would be taken to the station and hopefully learn a lesson or two.

The fear such a situation brings has occurred many times before, and unfortunately, I’m sure will happen many times in the future as well. What concerns me, however, is that no matter how independent or empowered I get, I am still just a ‘woman’ for society, which loosely translates to being easy prey.

I am also not alone in experiencing such traumatic incidents while using public transport. A young girl from my village had to quit her studies because she was continuously harassed on her way to school, and her parents could not afford any safe means of transportation. Similarly, a transgender colleague of mine once told me that while she was travelling to Islamabad in a public van, she was continuously touched by an older man sitting behind her, and she had no choice but to get off the van to feel safe again.

One may argue that one way to make public transport safer for women could be to have female drivers, or have transport exclusive for female passengers. There have been a few initiatives to do so, such as the pink rikshaw, pink taxi, and even female Careem captains. These, however, come with limitations.

I once had a female Careem captain pick me up in Lahore at around 9:00pm, accompanied by her female cousin, because this is the only way she felt safe driving around at night. A friend of mine once booked a ride where the female captain refused to take her to her destination, suggesting the route was not safe. As for the pink rickshaws and taxis, they too are limited in number, not easily available, and of course, do not provide any assurances for women’s safety. The only thing an all-female vehicle does is make both the passenger and the driver feel unsafe and uncertain of getting home safely.

After all, be it by staring, groping, catcalling, or touching their genitals, men make it difficult for women to inhabit public spaces. We are living in a time where men do not want women to leave the house, and if we do, they do their best to make us uncomfortable enough to not want to go outside. By ensuring women are never safe, not even during the basic necessity of traveling, the men in our country try to ensure we simply do not go anywhere. However, despite the endless harassment, millions of women are brave enough to step out of their houses every day, and every day we refuse to stay inside is another battle women fight to achieve empowerment.

The author is a motivational speaker and a human rights activist working for issues faced by transgenders and women in Pakistan. Her blogs are personal and do not reflect her professional and political affiliations.

Talking dirty: It’s 2018 and Pakistan still does not have proper sanitation

Rights over respect?: “Madam, this is the Red Zone and ‘khusray’ are not allowed here”