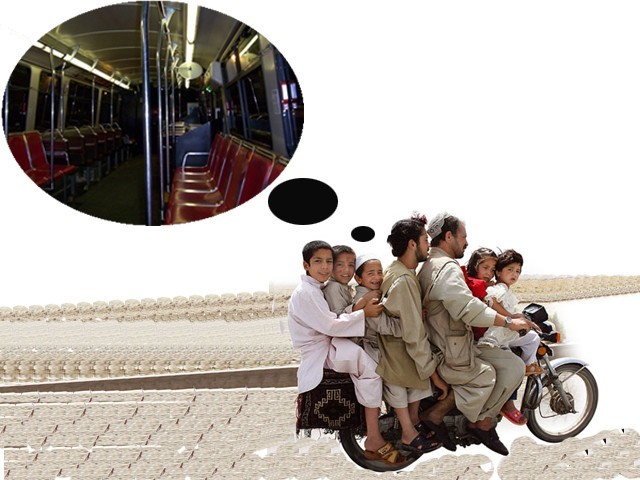 I saw a motorcyclist with four children and his wife balancing themselves as they went up the Shah-Faisal colony flyover. These are the people who suffer a lot more than I do. DESIGN: ERUM SHAIKH

Travelling back home from work is always a tough and tiring job in any metropolitan city across the world, but in Karachi, this experience can be downright torturous.

A while ago, while I was in Ukraine for the Euro cup, travelling via the tube in Kiev city, my hosts, a middle class Ukrainian couple, inquired about the subway system in Karachi. I very casually told them that we did not have a subway in Karachi or any form of underground transport system. This revelation seemed completely unbelievable to them and after giving me a look of disbelief they asked if there was any other sort of mass transit system in one of the largest metropolitan cities of the world? I told them,

“We just have buses”

As I answered their questions on how the lower income class manages their mobility, our station arrived and we moved onto another conversation.

After my two week stay in Ukraine I noticed that even their smaller cities such as Kharkiv, another host city for Euro cup, with a population of 1.5 million had a subway system and how easy it made the life of its citizens.

As always is the case, whenever one comes back home after a foreign trip you seem to have this feeling of disappointment, whether it’s the paan eating civil aviation staff, heavily armed protocols of some dignitary (read leach) or the harassing custom officials looking to bag an expensive bottle of whisky or some of your leftover foreign currency.

However, this time my thoughts automatically shifted to the transport system of the city.

It was a Friday night, so the first thing I noticed was the long queue at the CNG stations which mostly had CNG rickshaws in it.

Moving forward I saw a policeman humiliating a bus conductor and its driver, most probably to get a few bucks out of him, the bus was overloaded with passengers sitting on the roof and men filling the women’s section as well.

Further down I saw a motorcyclist with four children and his wife balancing themselves as they went up the Shah-Faisal colony flyover. These are all the people I criticise and wish they were not on the road when I am stuck in the traffic jam, however this time I felt that it’s them who suffer a lot more than I do.

Why though, doesn’t a metropolitan city like Karachi have a proper mass transit system?

We can blame it on the political parties, the transport mafia, the incompetent bureaucracy or the prime land grabbed in the city by the armed forces. Although all of them are responsible in some way or the other but I feel the primary responsibility rests with us, the citizens of Karachi. Not only have we become uncaring and unsympathetic towards our fellow citizens, we have also started to believe we are not capable of deserving better.

If any layman would do a cost-benefit analysis he would very easily understand that not only are we being economically exploited but also pay a very high social cost due to the absence of a mass transit system. However being a nation that champions the ‘free rider concept’, hence none of us will be able to calculate the costs.

Hence here are a few reasons for the citizens to demand for an efficient mass transport system:

I would also like to provide a few reasons to our self-centered political parties to pursue a mass transit system:

All I can do is propose to the authorities to consider the plight of their people and hope they will take appropriate action.

The author holds a degree in Industrial Economics from the University of Nottingham and currently works as an Economic researcher on economic development projects related to Climate change and Agriculture. He is also a travel enthusiast.